Yet More Erosion Of Peoples Rights Planned By David Cameron

David Cameron is said to be drawing up plans for anti-strike laws to prevent  workers withdrawing their labour.
At present the law is that if 50% of those who respond to a ballot for a strike vote in favour then the strike can be legitimately called.
David Cameron wants to change the law so a strike can only be called if 50% of the entire union membership vote for it.

Following this through, the most obvious thing is if this stupid idea was in force during the last general election then Cameron would not now be prime minister and Boris Johnson would not be Mayor of London, it reeks of double standards.

Cameron has only had his underlings tout this in order to try and direct attention away from his ghastly appalling inefficient way he is allowing these obscene bankers bonuses through, despite making a pledge to the electorate that he and the Tories would only allow bankers bonuses of £2000.

Cameron cannot blame the coalition for this one as the Liberal Democrats (supposedly) wanted to be tougher on bankers bonuses.

Yet another backtracking and broken promise from the lying corrupt Cameron.

I suspect as Cameron sees the Tory lead in the polls begin to ebb away, along with their popularity and government approval now entering freefall, panic is setting in. Having already blown a double figure lead in the polls in the run up to the last general election, David Cameron knows that once the voters take against you, they generally tend to stay that way.

As ever David Cameron is short on gray matter and cannot think his own ideas up, this seems to be some kind of rehash of what the CBI was talking about.

"At the moment a simple majority of those balloted must vote in favour for the strike to be legal. The CBI proposals would mean (Left Foot Forward)  that not only must there be a majority but in addition 40 per cent of those balloted must vote “yes”. In other words abstentions and non-voting would count as votes against. If these rules were to be applied to, say, local authority elections, there would be very few councils operating."

We already have some of the strictest anti-union laws in the world, we do not need them to be strengthened, just because Cameron is scared that his cuts and his Government are going to provoke strikes and anti-government feeling, is no excuse for be profoundly undemocratic.

Cameron is trying to preempt problems that his own government are causing and to deal with that he sees the solution as taking away more and more rights from workers.

Strikes may not be popular and they may be inconvenient, but to be able to withhold your labour is a basic human right. David Cameron, Nick Clegg and George Osborne seem to revel in the idea of taking us back a 100 years to when workers had no rights and were just trampled underfoot.
If we allow this this profoundly undemocratic right wing government to further interfere with and erode our rights and union power, then our wages and working conditions would suffer year upon year. Already Cameron and Osborne are trying to rule by fear, first they sack thousands of people, then plan to sack half a million more, then scare the remaining workforce into accepting any treatment and any conditions in the workplace by making them afraid for their jobs. This is already happening, once Cameron as rendered the unions impotent, he will then remove the minimum wage, this is exactly what I warned about on here last week and look just a few days after announcing it, it is beginning to take shape.

"There is a reason why freedom of association is in every significant human rights charter".


Freedom of association is guaranteed at the European level in article 12 of the Charter of Fundamental Rights of the European Union. This article ensures everyone the right to freedom of peaceful assembly and freedom of association at all levels. Paragraph 2 of this article also states that political parties at the Union level contribute to expressing the political will of the citizens of the Union.
Stand Up For Your Rights - This government are attacking our very right to coexist alongside those with money, wealth, privilege and power.

This is a government that is governing by fear, chaos and lies, if they are not stopped they will remove all of our rights and unless you are a multi millionaire, this will effect each and everyone of us and will also have a detrimental and devastating effect on children's futures. 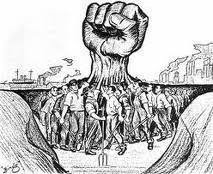 Our Unity Is Our Strength *Together* we Can Bring This Government Down!
Posted by Gracie Samuels at 4:57:00 PM