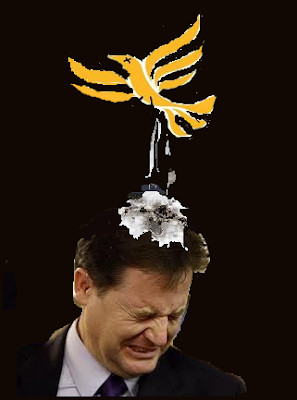 See How Liberal Democrats Use Lies and Personal Attacks In their Leaflets and then they ahve the cheek to complain in Oldham and Saddleworth.
Also fair enough if the court decision to strip Phil Woolas of his seat is just, then I call for parity between all constituencies, this means that all Lib Dem MPs should now be sacked for signing a pledge they knew to be completely worthless, in order to buy the votes of the student population, in short Nick Clegg lied andit is not the first time he has been caught lying. They should all go and by-e;ections should be held in their seats.


Amid all the bluff and bluster over the Coulson affair, the real significance at PMQs for me came in its dying moments.
It wasn't that Tory rebels such as Eleanor Laing and Chris Chope asked withering questions about the AV referendum bill. It was that Clegg, in his answer to Chope, appeared to gift the Tory rebels a chance to defeat the bill.


Chope: "If the Bill is significantly amended in committee or defeated on third reading, will the Liberal Democrats leave the coalition?"

Clegg: "I am not sure if this will please or disappoint you when I say that the persistence and resilience of this coalition is not dependent on any one single piece of legislation.

"This Bill is only one part of a much, much wider programme of political reform, including giving people the power of recall ... to clean up party funding, to produce proposals finally to reform the House of Lords. Political reform doesn't begin or end with this one single Bill."

Now Clegg may have simply garbled his answer and meant that the result of the referendum wouldn't affect the coalition. But he did repeatedly talk about 'legislation', so it seemed like a bit of pre-cooked rhetoric.
Tory MPs will now feel free to do their worst. The DPM's words provide the perfect alibi for any rebel or potential rebel: even if you defeat this bill, the Government won't fall apart.
Given that this was the very threat used by the Govt whips to keep people in line recently - the doomsday scenario where a rebel vote could bring down their own PM - Clegg's remarks certainly matter.
It was, of course, a clever question from Chopey. Clegg could hardly have answered that he would quit the coalition if the bill fell. Yet surely he could have finessed things without handing his enemies - onboth the Labour and Tory benches - today's gift?