Blair and Brown Call In Police Over Phone Hacking. 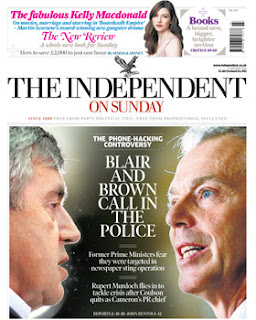 I knew this was going to bring this government down, this has now started and now we see the REAL reasons why Andy Coulson had to resign and as David Cameron must have known the real reasons too, this makes him a serial deceiver, in other words a pathological liar!

How could he give his full backing to Coulson? In fact how could the buffoon ever hire Coulson in the beginning? Cameron is a buffoon in charge of an amateur buffoonish government, with a chancellor who cannot add up and doesn't know his fiscal policy from his monetary policy, who does not pay his own tax to his own office and who is also taking an unprecedented gamble with the economy, an education secretary who has to bring out 6 papers before he gets one of them nearly correct, a transport minister who has off-shore accounts and does not do anything about the snow report on his desk from last June, and leads us full on into a severe winter and brings the country to a stand still, a health secretary who does not know his arse from his elbow who inflicted a swine flu epidemic on the country, and who now has the full backing of the prime minister to mess up and privatise the NHS.

If it can be proved that Tony Blair and Gordon Brown's phones were hacked and that Cameron knew about it, or benefited from it or both, this Tory led government of complete sleaze ridden buffoons is doomed and not even a year into the parliament.
The right wing papers need now to be feeling very afraid, the Murdochs are in this up to their eyes, they have been the ones mainly going for Gordon Brown and telling such ridiculous lies about him.

This is what happens when UNELECTED Australain news barons get out of control and try to rule the country, they become dictators and work the Tory prime minister by pulling his strings!

I am becoming addicted to your blog!
You are right about this government, I think people have genuine cause to fear them and have no confidence in them, we should demand a general election - throw the liars out!