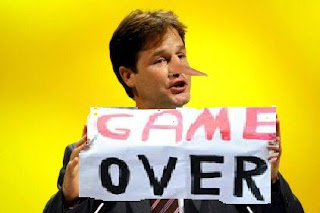 Last September 2010, Nick Clegg was taking Prime Minister's Questions in the House of Commons, he was asked by Labour's Jack Straw, if Andy Coulson knew about the phone hacking, Clegg petulantly announced that they had informed the police and then Clegg went on to reveal that when Coulson resigned over the allegations, "the first person to commiserate with him was Gordon Brown. He told him he’d done the honourable thing, and said knew he would go on to do a worthwhile job."
Apparently Mr Brown had telephoned Mr Coulson after learning about the resignation.

Clegg saying this revealed two things:
1) That Nick Clegg had been given this information by Andy Coulson in preparation should this question come up at PMQs. So much for Andy Coulson's personal integrity that he should reveal a phone call from someone who only wished him well, in order to beat Mr Brown and Labour around the head with it.
But what do we expect from a Fleet Street hack, who denies knowing what the world and his dog, know he knows!

2) More importantly, this faux pas by Clegg and Coulson also revealed something far more profound, it proves that Cameron, Clegg and Coulson and no doubt George Osborne, have been openly discussing Coulson's involvement with the News of the World hacking scandal.

All of these men know that Coulson knows more than he is letting on, let's face it if he did not know what his reporters were doing and how they were getting information that quite frankly was illegal, then he would be totally incompetent. Not only would this have to go to the papers lawyers before it was published, the first question that Coulson as editor would have wanted to know was where they got their information from.

Now that Gordon Brown and Tony Blair are demanding to know if their messages were hacked into, this rather stupid comment by Nick Clegg in the House on September 8th, is likely to come back and bite them.
Posted by Gracie Samuels at 2:49:00 AM