The Tories Knew they were Going To Attack The Poor, Vulnerable and Disabled BEFORE The Election 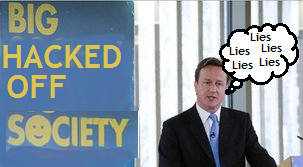 These are all organisations that help people in need and distress, the very same people this government are forcing to pay for the greed of their friends in the city. This government aided and abetted by the Liberal Democrats who insist they are doing the "right thing" in propping up a government that is hell-bent on attacking the poor, vulnerable, sick and disabled, are morally bankrupt.

The "Big Society" is just a Big Con

Research for the False Economy website  - found it was charities related to children and young people that were most affected, with more than 200 receiving cuts in funding.
Some care services, groups for the disabled and support for the elderly are also affected - for example Age Concern Oldham will see its funding reduced from £212,892 to £31,000, while the Voluntary Action South Leicestershire (VASL) has lost £20,939 state funding for its befriending service, which supports those those who are isolated and lonely.
Birmingham was the council that had made the biggest number of cuts, although it is the largest local authority in the UK.
Charities play a key part in Prime Minister David Cameron's concept of the "big society", which encourages greater personal and family responsibility and community activism.