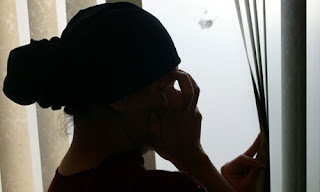 In this blog I want to point out how the recession is forcing an increase in domestic violence, this is not an excuse it is a fact. I am not blaming this government for this it is not their fault that people think it is acceptable to be violent towards their partners, however, what I am blaming this government for is cutting fund which is forcing the closure of centres and organisations that help the victims of domestic abuse, right at a time when they know that demand for these services is going to increase, that is indefensible.

There are also fears cuts in funding for legal aid and women’s refuges will make it harder for victims to escape abusive relationships.
Sandra Horley, head of charity Refuge, said poverty and unemployment “exacerbate the violence”.
She added: “With even more women coming forward, where are the specialist services to support them?”
Labour MP Gloria De Piero said: “The huge increase in domestic violence is a real concern. Vulnerable women are being attacked on an appalling scale.”
Of course violence is not only  male on female, however, I think you will agree the stats mentioned in this report are staggering, especially when you realise that more often that not children are also caught up in domestic violence and it blights and often ruins their childhoods and can also have major implications on their future relationships.


Some Centres and Organisations Now closed or closing thanks to the Tory cuts.

ADVA - Against Domestic Violence and Abuse – was set up in November 2002 to bring together the statutory and voluntary agencies within the county to tackle the problem of domestic violence. They help thousands of women and children every year escape violent and life-threatening situations.

Summergrove is a housing project for families recovering from substance misuse and often domestic violence. It is a safe haven for parents to rehabilitate and for their children to enjoy stability whilst staying together as a family unit. In effect, they are given the chance to rehabilitate together as a family unit. With this service closing families will miss out on the chance to stay together and more children could enter foster care, costing the local authority thousands of pounds and ripping families apart, thus creating more social problems in the future.

VICTIMS of domestic violence could be left without a vital support service after Devon County Council proposed to cut all of its funding.
Adva (Addressing domestic violence and abuse) could now face the axe if plans to withdraw £1million of its budget go ahead.

That's not a misprint: the council has indeed said it wants to withdraw the entire £1m it currently gives to the three charities which make up the county's much-lauded domestic violence and abuse network, putting all three at serious risk of closure, removing support for thousands of vulnerable women, and, as it happens, a few men too.
Domestic violence refuges in Essex are having to make cuts to their services due to a reduction in their funding.
Five organisations which receive money from Essex County Council to provide services said they had seen reductions of up to 24% from the authority.

Safer Places - Harlow Face Funding Cuts  - Safer Places, which runs refuges in Harlow, Southend and East Hertfordshire, is losing £186,000 from the council, a reduction of 24%.
Safer Places is an independent domestic abuse charity dedicated to supporting adults and children affected by domestic abuse.


Eight Domestic Violence projects Lose 100% of their local authority funding in 2011/12
These organisations provide vital services for  vulnerable children and abused women. As well as the misery and distress they cause, such cuts will increase pressure on the NHS and other statutory services: they are truly a false economy.
From the figures published it shows that domestic violence projects have lost nearly £2.5 million, with 8 loosing 100% of their funding.

Women's groups struggle amid spending cuts
Violence Against women services are not a luxury
Communities Threatened By Police Cuts - Proposals that will see around 34,000 police jobs go between now and 2015 have been criticised for seemingly undermining the coalition government's claims to be supportive of a strong and effective police service. Critics have said that one inevitable consequence of the cuts will be a rise in crime. Not only a rise in crime but this alongside a catastrophic rise in domestic violence crimes any police shortage will heavily impinge on the help local police will be able to give victims of abuse in all communities.

Police Cuts - For example: Cheshire Police are losing 750 staff, one-third of whom are officers. Tory cuts will affect frontline policing in our communities.

Kent’s police force is cutting 1500 jobs- 500 of which will be uniformed officers. The Chief Constable has warned that this will inevitably lead to an increase in crime.

The funding for DVIRP is running out in July 2011 and due to cuts to council funding and charities grants from the government, DVIRP may have to close its sexual and domestic violence specialist advice unit. Furthermore, DVIRP may have to cut down on helpline hours and volunteer training.
Manchester City Council plans to hand over its 20 youth centres and 36 Sure Start nurseries to partner organisations such as charities. A £1m budget will be in place to commission these services, but where no organisation can be found to take over a youth centre or Sure Start nursery, that service will close.
In addition, early years teachers at Sure Start nurseries will be scrapped, with around 30 jobs going.
Manchester’s Sure Start nurseries provide childcare, health and education services for some of the city’s poorest parents.
Bromley Council has voted to massively cut back its Children and Family Centres as part of its 2011-13 cuts plan. The council had planned to open 23 centres over three phases, but had already voted to reduce phase three from seven centres to two centres, saving £600k in 2011/12. The council has now voted to cut the entire programme back to just three centres across the borough - two in areas of deprivation, plus one borough-wide centre for children with disabilities.
Bromley has already opened a number of Children and Family Centres, many of which will now close. They bring together all the different support agencies to offer a range of free services to meet the needs of children under five and their parents/carers in one place.

Trafford’s budget for housing for vulnerable people has been cut by £450,000 in its February 2011 Budget.

Manchester Sure Start Family support work with vulnerable families with a child under 5.  Majority social work referrals, families with complex needs. Being cut by 25% for voluntary sector jobs, not known yet about MCC staff.

Protesters Hold Demo Over Legal Aid Cuts  Women will no longer be able to obtain legal help for many of the issues associated with leaving a violent relationship, according to the National Federation of Women's Institutes.

Women who suffer from domestic violence will be trapped in abusive relationships if the government goes ahead with a controversial reform of the welfare system, according to leading charities.
Tory Government Shelves Domestic Violence Protection Scheme
A scheme to protect women from domestic abuse by removing violent partners from the family home has been shelved by the government, sparking fears that public protection is being put at risk by the coalition's cuts programme.


I could go on, depressingly there are such a lot of these stories. The government were warned that domestic violence would increase, they arrogantly ignored all the warnings, their answer to the upsurge in violence is to cut funding to centres and organisations that help victims of abuse and if that isn't bad enough, this government then removes legal aid making it impossible for victims of domestic violence to get protection through the courts.


These cuts are not be done to save money, they are being carried out by a heartless ideologically driven government that hates the welfare state and hates the NHS and just doesn't want it as part of our society. When this government is finished with their ideological insanity, where on earth is it going to leave Britian as a country? People may think they can do without the welfare state or the NHS or state education, or organisations such as those who help victims of domestic violence, but that is because they have never needed them, when our public services have all be removed by this millionaire government who has no concept of what it is like to be ordinary, when ordinary folk fnd themselves in need of the NHS, out of work, or the victim of a crime and there is nothing and no one there to help them, they will truly realise then what we had and what this Tory government took away.


Once our services are gone, they are gone probably for good - ask yourselves if that is what you really want? Ask yourselves is that what you want for your families? How will they manage in the future struggling to pay health insurance, education, what if they fall sick? Unemployed? Who will help?


Fight the Tories - Don't let them win - This Is Our Country and no one gave the Tories a mandate to tear our society to pieces, ruin our public services, privatise our NHS etc and turn us all against each other.
Posted by Gracie Samuels at 4:24:00 PM

It's going to be a very poor country once the Tories and Newer Labour have finished with it.

The country wasn't poorer when labour left it beofe why should it be now, unless you think the global financial recession was the fault of Labour, which is a bit irrational to say the least!

In fact if you take a look at some of the over 2000 cuts the Tories have made and are making you will see that actually under Labour we had a decent country and now it is being slowly ruined.