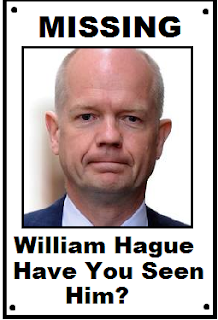 When "Disappearing Dodgy Dave" Cameron, our "illustrious" prime minister was in Tuscany on holiday refusing to return home to the country he is supposed to be leading when it was in crisis with the economy,  riots, looting, violence and arson, "DDD" was quite content to allow "Free Willy 2" to hold the fort. At that time Cameron didn't care that  images of a burning Britain were being transmitted all around the world while he and other cabinet members such as his non deputising deputy pm, Nick [where the hell are you] Clegg; the chancer chancellor George Osborne; Bonking Bonkers Boris the Tory Mayor of London and  "nasty party" Secretary Theresa May[be] all stayed away on their respective holidays soaking up the champagne and sunshine. The only man in the entire millionaire "Billy Bunter" and "Lord Snooty" Tory cabinet  left in this country was the Foreign Secretary, William [Billy no-mates] Hague, who was forced into a defensive position over the economy which is not even his brief.

He tried to handle the press enquires about the the UK's failing economy and the effect that the EU's sovereign debt crisis was having on this country's economy, not convincingly, but at least he was here to do it and gave it his best, he even managed to scramble the very junior gormless Lyn Featherstone Liberal democrat MP and even more gormless, and even more junior Tory Treasury minister the hapless Justine Greening to try and reassure the thousands that were seeing billions wiped off of their pensions etc that things would eventually settle down. That was all week leading up to the Friday before the Tottenham riot and that was when Hague was last see on TV since then no one has seen neither hide nor "hair" of him!

Then the Tottenham riots happened on the Saturday night and during this time not one single announcement from government to inform the public that they (the government) were in control and were working to restore law, order and calm. Bizarrely the next morning after Tottenham there was still no announcement from the government, the only politician we saw on our screens was David Lammy Labour MP for Tottenham who gave a long statement and was filmed walking the streets of Tottenham - still nothing from the government. It was not until lunchtime that Theresa May gave a short couple of lines to the news and that was it. The news stations reported that there was no word from the prime minister and still no word from William Hague who had apparently gone to his official summer residence and was NOT available to comment on the riots in Tottenham.

The next evening came (Sunday) and it was then obvious we were in  for trouble as the violence, rioting and looting and arson was spreading across London and to other parts of the country. Still no word from Cameron and still no word from Hague.

Come Monday morning eventually we got a one line response from David Cameron, that he was aware of the riots and was being kept abreast of the situation! (but still not returning home), however, there was still NO word from Willy!

Eventually when "leafy Ealing" was set alight and looted on the Monday evening, Disappearing Dodgy Dave decided he had better return home (at long last). Still no word from Willy, not then or in the subsequent days post-riots.

Now these past few days the situation in Libya is reaching some sort of end game and this is definitely William Hague's job, so where the hell is he? I know when Libya firs kicked off Willy was filmed giving bizarre interviews telling us he had it all on good authority that col Gaddafi was on a plane out of Libya as we speak (he wasn't of course, he was till very much in control of Libya then) and later when the whole Libyan crisis went pear shape in this country "jet set Willy" told us all he was not in charge of the country as  "I knock off at 3pm" Nick [where the hell are you] Clegg was and "Jet Set Willy" was leaving on a jet plane to Washington that night in any case. Remember at that time Nick (where the hell are you) Clegg had forgotten he was in charge of the country (or Cameron had forgotten to tell him)?

Now that Disappearing Dave cut his fifth holiday of the year short (poor thing) to return home, we would have also expected to hear from the Foreign Secretary too, but we haven't, not a peep!  As Disappearing Dave  knew things were reaching a tipping point in Libya, the wise thing would have been not to go away in the first place, then he would not have felt compelled to rush back to Downing Street to bask in any glory he could find, however, now he is back and jumping in front of any camera available giving the impression that it was all thanks to him, while the rest of the world's leaders are taking a very downbeat measured response to the news, probably sensible as this morning Gaddafi's son Saif who was supposed to be arrested yesterday, has popped up in front of cameras and reporters overnight and one is now left wondering just what kind of last ditch defence Gaddafi and his sons are going to mount, so muted dignified response by other world leaders is probably the correct thing to do. Not so for Disappearing Dave, he wants to get in first, still it is not as if he is known for his excellent judgement is it? this is just one more view of this incredibly idiotic ineffectual prime minister, who has managed to make a fool out of this country on the world stage - yet again!

Pity "DD" did not deem it important enough to return to this country when people desperately needed our prime minister during the riots, but it is noted that he can manage it when he thinks there is something in it for him!

However, isn't it odd that the person who has seen this thing right through, has taken all the knocks when things went wrong, took all the bad publicity when Disappearing Dave was out of the country when Libya first kicked off and was doing nothing about our nationals stranded in that country in fear for their lives is not now here to explain about Libya and what is happening? Why?

Where is William Hague the Foreign secretary, has he been kidnapped? Has little Willy caught the "disappearing bug" from Disappearing Dave?  has "Jet Set Willy" indeed jetted off somewhere on holiday and cannot be asked to return home to do his job at such an important time in his career?

Something is wrong, wonder why the papers have not picked it up? Perhaps it is something personal, even so, I would still have expected the foreign secretary to have given a statement to camera for this occasion.


Is Cameron keeping him away from the cameras because Cameron wants to hog all the glory for himself?

Has there been some kind of huge falling out between Disappearing Dave and  "Jet Set Willy"?

When parliament returns from the summer recess, is William Hague going to resign?

Willy just spotted on Sky News (at last)
Posted by Gracie Samuels at 11:22:00 AM