Can Cameron Get Any More Stupid? 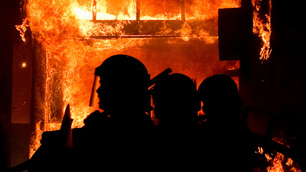 Words fail me just how utterly stupid the prime minister actually is, why the hell is he using emotive terms like "the fightback has begun"? I think he has been reading the Daily Mail too much, perhaps he is trying to suck up to the Mail? Who knows what the hell is in that man's mind.

"Fightback" means we are in a fight with these individuals carrying out these criminal activities, we should not be fighting them, we should be controlling the situation and be in control of the country. If they break the law they are arrested and face charges and trial, we do not fight them! this is emotive language that could actually inflame an already tense situation, it could cause more stand-offs with the police and the police are already over stretched, especially in London, where the Tories have already got rid of 900 officers within the last year!

Cameron needs to stop thinking about his re-election and start doing the job he lied and persecuted his way into.

What a cheek he has, Cameron uses words like "responsibility" and "complacency" yet it is he who is totally irresponsible and it was he that showed alarming complacency when he stubbornly refused to return from his luxury Tuscan holiday villa, yet he could see with his own eyes London was burning and the anarchy was spreading and no doubt he was told that hundreds of people had lost their homes, their possessions, their businesses, their jobs, their cars and vans and some only had the clothes they stood up in because they had to leave their homes so quickly because they had been set ablaze by rioters.

David Cameron should resign now, before he causes still more heartache to people!
Posted by Gracie Samuels at 5:21:00 PM

David Cameron made an odd remark Gracie in where a young man who was being helped by fellow youths after being injured was actually being robbed by them. David Cameron said that was a sick act

"The rich are different — and not in a good way, studies suggest

Might be a good idea to create a system that does not have people who consider their people to be vermin as our leaders in future.

fourbanks, I find whatever the PM says hard to believe, the way he has used people to get what he wants is underhand and that is a very good way to describe him. I think Cameron is such a liar that the lines have become blurred and he now probably believes his own lies and then simply forgets the things he has promised people.

I just read the little article on the link Robert supplied and think that there is probably some truth in it. I like this bit:

There is one interesting piece of evidence showing that many rich people may not be selfish as much as willfully clueless, and therefore unable to make the cognitive link between need and resources. Last year, research at Duke and Harvard universities showed that regardless of political affiliation or income, Americans tended to think wealth distribution ought to be more equal.

The problem? Rich people wrongly believed it already was.

I do find most rich people absolutely clueless as to the way other people are forced to live. However, I am not sure they are not selfish because I think they are.

Obviously people without much do aspire to have things that for most stay firmly out of reach, which is probably behind a lot of this looting.

Rich people tend to think that all one has to do is work hard (like them) and all will come to you, well it doesn't work that way, what most rich people have which poorer people do not is "connections" and nothing more graphically demonstrates that then the internships for sale, do you remember that? Rich and connected people use their connections to get their relatives or friends into good positions, it is second nature to them and they do not realise that connections help. Look at Sam cam, she has all the best connections for her business it was never going to fail, but if I started the same business I doubt I would even have been able to get past the first hurdle of actually buying the stuff for sale.

Good article as always, Gracie, and good comments. However, I would disagree with Fourbanks in his assessment of Sir George Young. It was Young who made a very Marie Antoinette type comment about homeless people in the 80s - 'aren't they the people one steps over on the way to the opera?'

Stephen Fry has a throwaway line in his autobiography ('Moab is my Washpot') which sums up the recent history of the Tory party. Describing his teen years in the 70s, he mentions how his father's social life revolved around the British Legion and the Conservative Club. 'That was before the Tory party went insane,' Fry notes.

Thatcher despised Ted Heath (the recent play about her on BBC4 had a scene where she tells party activists that she's as much against Ted Heath's brand of Conservatism as against Labour). Heath was a rotten PM, but he did adhere to the post-war political consensus. He had no wish to dismantle nationalised industries or undermine the NHS. Likewise Macmillan criticised Thatcher for 'selling off the family silver'.

The Tory party now is hellbent on repeating the mistakes of Thatcher and Major's premierships. Their policies are irrational, highly damaging and dangerous. The Tory party has indeed gone insane. The only good that can come out of this is that they will finally make themselves unelectable.