Government Forces Us Into Debt To Pay For Mad George Osborne's Insane Plans!

First a bit on the so-called closures of tax-loopholes. (I could go on to expose all the Tories that get up to this game, but I'll leave this for another day).

In last Wednesday's Budget Conservative chancellor George Osborne muttered something about tax dodgers and tax avoiding, it was hard to understand what he was saying because most of the time he was looking down and muttering and the rest of the time coughing and spluttering.

The chancellor highlighted plans to scrutinise “the taxation of very high value property, where evasion and avoidance are widespread and some of the wealthiest are found not to be paying their fair share”, along with plans to close down three forms of stamp duty land tax avoidance. However, absolutely nothing was done about the avoidance of stamp duty by companies buying residential  property - why has the chancellor not taken this opportunity to close down this tax-loophole? It is a massive loophole which allows these companies to avoid paying their correct taxes. (I am not going to cover why I think this is happening in this blog but it is something I will be exposing very soon!)
So in event of all the bluster and " tough talk" by the chancellor, it turned out as usual to be just that -*talk*, and Britain's 120,000 "non-dom" overseas taxpayers having escaped a full-blown government crackdown on their disingenuous tax affairs all breathed a collective sigh of relief!

In fact all the chancellor has done is promised to collect just £1 billion out of  approximately £120 billion per year of the tax due to the UK Treasury, that means that approximately £119 billion is going uncollected by HMRC. Multi-national companies like Vodafone have personally been allowed off of paying £6 billion in back tax to the UK Treasury by George Osborne. It should be noted that politicians of all colours promise to save this "mythical" £1 billion in tax loopholes, but strangely none of them ever seem to manage it!

George Osborne said that those who are resident in the UK but domiciled elsewhere for tax purposes will have to pay an increased levy after living in Britain for 12 years.Under the current system, non-doms are charged a £30,000 annual levy after living in Britain for seven years, in return for paying tax only on their UK earnings and monies brought into the country. The fee will now increase to £50,000 after a non-dom has been resident for 12 years. However, non-doms will pay no tax on funds remitted to the UK that are then invested in British business. (Another government manufactured tax wheeze in the making)

Not only has Osborne's move done virtually nothing to worry the non-dom status in this country, or the widespread abuse of the tax system by non-doms and multinational companies or wealthy individuals, the move is expected to boost the appeal of London as a place of residence and the new tax relief now offered by the chancellor could open up possible money laundering opportunities! Nice one George! I mean do look after your billionaire Tory financial backing mates, God forbid they ever have to put their hands in their pockets and pay their fair taxes for the good of the country that has made them rich, affluent and all powerful. Why shouldn't their miserly voices be heard in corrupt political circles over and above the ordinary citizen in this country? After all it's true money does talk, especially in rich political Tory party circles, think tanks and lobbying companies!
Whether it is intentional or not and despite announcing a so-called crackdown on tax avoidance abuse, the chancellor looks to be opening up nice comfortable tax avoidance opportunities for mega rich people. Osborne's crackdown which is predicted may raise just £1bn a year (if implemented) is just a fig leaf, really this chancellor has done non doms, tax avoiding companies and individuals a huge favour. George Osborne seems totally lacking in brain power, ability and flair and is simply unable to understand the complexities of the tax system and what his changes may mean, invariably, whenever Osborne tinkers about with something it ends up making things a lot worse, he just doesn't possess the ability o to see or understand the knock-on effect and chain of events he sets off when he messes about with something.

Bizarrely non-doms had a further reason to be cheerful as Osborne confirmed that the 50% top rate of income tax was considered a temporary measure, giving hope that this may be reduced before the end of this parliament. This tax break will be paid for by millions of people being hit hard by VAT increases, fuel increases, utility bill increases and the poorest people having their benefits cut and frozen, from pensioners winter fuel allowances to family's working tax credits, to disabled people's allowances and to the detriment of spending on health and the NHS and education. yet again another Tory chancellor is taxing the poor to pay for the rich. Individuals like Philip Green and his wife pay very little tax in relation to the billions they make in this country. Philip Green once described giving his wife (who resides partly in Monaco)  £1 billion as "a bit of housekeeping", yet Philip Green was personally asked to by David Cameron to advise the government on making cuts!

While Osborne allows his Tory friends the non-doms and leaders of multi-national companies to avoid paying their taxes, he has given a personal directive from the Treasury to all collectors of taxes to pursue relentlessly all the small businesses who are late paying their tax! Now these businesses as Osborne should know virtually all have cash flow problems caused mainly when large multi-national companies (sometimes owned by the chancellor's buddies) are months late in settling their accounts with small and medium sized businesses, it can make or break these businesses and has put many of them out of business causing them to go bankrupt and then the debts are striked. The chancellor could have done something about forcing these companies to pay their bills immediately to the smaller businesses thus easing one of their biggest problems "cash flow" but he did nothing!

In 2009 Barclays bank made billions in the UK but paid just £113 million in corporation tax! Yet a small business with a very small turnover is stung by a £33.000 tax bill, where is the fairness in the UK tax system?
According to 38 degrees George Osborne could have helped claw back some of the taxes owed to the UK by three simple measures.

The chancellor did none of the above, which shows he is simply uninterested in making these large companies pay - I'll go into why at a later date.
Last week's budget we all saw not for the first time this chancellor practicing sleight of hand and a blog called sturdyblog explains how we are going to be forced into debt to pay for the chancellor's plans to reduce the deficit. I hope they do not mind but this needs to be widely circulated.


Ahead of Osborne’s emergency budget, the forecast of the OBR for household debt (i.e. the money an average UK household owes, incl. secured loans like mortgages) had been: 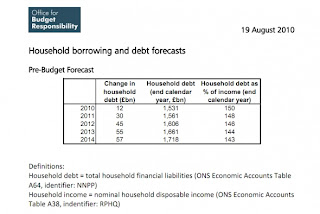 This showed a predicted decrease of household debt as a percentage of household income, from 150% in 2010 to 143% in 2014. This had to be revised for Osborne’s emergency budget: 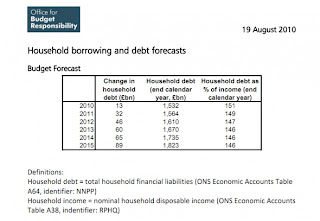 The decrease is now less sharp between 2010 (151%) and 2014 (146%)  and actually flat-lines in the last three years of the forecast. Ahead of Osborne’s recent budget, however, as the cuts bite and growth stutters, the OBR had to issue a correction, dramatically revising their forecasts to: 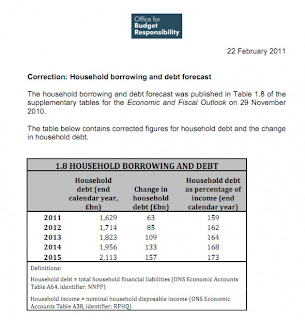 Not only are they no longer looking at a decrease in household debt. They are looking at a STONKING 14% increase over the next five years. In money terms, almost £500 billion is being added to MINE and YOUR personal debt. And this doesn’t even take into account the inevitable, approaching interest rate hike.
Tax Research UK Says:  "So the government is going to cut its debt. And as I noted they’re going to do that by increasing taxes at way over the rate of inflation, whilst cutting services.
And how is the equation squared? Why, they’re now predicting we’ll go into debt to pay for it.
I guess that’s one way to prepare RBS and Lloyds for privatisation.
But make no mistake - what this really means is that the groundwork for the next crash is being laid out in the government’s  own plans as borrowing becomes the only way people can feed and house themselves and their families. Irresponsible lending will follow, and we all know where that leads.
I am sickened at their sheer gall. So should everyone else. And full marks to Sturdyblog for spotting this. "

Put this in simple terms  we seeing here compelling evidence that the government is relying on large swathes of the population to borrowing money to stay alive to help get the country out of debt. In which case, we in this country are heading helter skelter towards another banking crisis with mad George Osborne at the wheel! Who will he blame that on? Don't tell me Labour!
Posted by Gracie Samuels at 4:45:00 PM

No wonder Gideon & co are trying to suppress this information. Labour should be shouting this from the rooftops, especially when the Tory/LibDumbs keep pushing the moronic 'nation's credit card' nonsense.

Exactly Nicky! Not only are this government totally feckless they are also totally dishonest and cowardly, not announcing the cut in pensioners winter fuel allowance and the chancellor tries 3 times and still has no idea how much tax he is taking from a litre of fuel!