The Bullingdon Club
Demonstrates The Privileges and the Excesses of Our Prime Minister
our Chancellor, and the Mayor of London 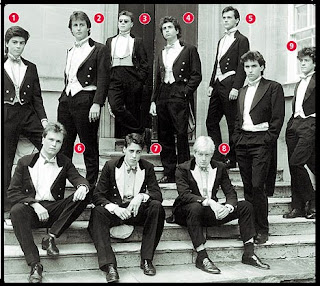 The Bullingdon Club
This is the photograph which reeked of privilege so much, there was talk that it could cost Cameron votes. Cameron was so worried that the electorate would actually see his privileged lifestyle that the picture was withdrawn from circulation!
The suits worn in this picture cost £1200 EACH.
On the night the picture was taken, some Buller members were arrested after a pot plant was thrown at a restaurant window, on fact such is the poor little bored rich boy's every whim catered for, they were allowed to wreck halls of residence and create havoc wherever they went, still there was always papa's money to get them out of any awkward situations!
The Bullingdon Club is now theoretically - a dining club which exists to support hunting, and has a traditional breakfast every year at the Bullingdon point to point.
So far 13 Old Etonian pals of David Cameron's have been placed in top positions within government, *WITHOUT* being elected.
this shows the duplicity of Cameron, especially when he repeatedly ridiculed former prime minister Gordon Brown for being an unelected prime minister! However Cameron and Clogg soon forgot about their apparent aversion to non elected prime ministers and other non elected entities, the pair of them soon persuaded their respective parties that a coalition government was the best way to go, instead of Cameron leading a minority one and facing the electorate after a while. Cameron obviously knew about his plans to attack the young, the elderly the sick and the disabled, to say nothing of the extra 1.3 million people he intended to put out of work. For Clegg persuading 23 of his Liberal Democrat MP's to ditch their principles, their core beliefs and prostitute themselves for power after coming a very distant 3rd in the polls, was apparently very easy. Both these men never had the confidence of the people to form a government, they are both using each other to cling onto power and they both do not care who they hurt in the process. It is a sign of weakness that Cameron did not have the balls to form a minority government and take his chances with the electorate, well who could blame him? After all he did manage to squander a double figure poll lead in just under a year as people woke up to him and his Tories and what he actually stood for, chances are had he gone much further the Tories would have lost their lead altogether.
The fact that David Cameron and Gideon [George] Osborne had to call in favours from all their Bullingdon cronies, their parents connections in the right wing press and actually sat back and worked out a way to humiliate and ridicule Gordon Brown for 2 solid years seems to sit alright with them. I realise that politics is a dirty game, but this dirty? These two men (I use the term "men" loosely) actually though it was OK to actually destroy another human being just so they got their greedy grasping hands on the reins of this country, it did not matter to them that they were both totally and utterly incapable of running this country, just so long as they got it, their spoiled little rich kid rearing, they want so therefor they must have.
Cameron was also supposed to be getting rid of unelected quangos. So far Cameron promised us NO top down reform of the NHS, and the first thing he does is give us top down reform of the NHS and the first steps to privatising it. He also promised to get rid of quangos, yet is in the process of abolishing 152 Primary Care Trusts and 12 Strategic Health Authorities and replacing them with at least 600 GP consortium quangos and one huge super consortium quango to oversee the lot of them. He promised us an elected House of Lords and has promptly been stuffing the Lords with as many of his Tory cronies as possible, in order that he may need them to get his legislation through.
There will be a price to pay for the "I wants" of Cameron, Osborne and Clogg, the trouble is that it will be the ordinary, the poorest and the most vulnerable people that will be paying the price for these people who would do anything to get hold of this country and make it pay severely for having the cheek to vote the Tories out for 13 years.
power.
By Rosie Wednesday August 25th 2010
Feel free to use in part of full on your website, blog or forum, I just ask that you also link back to here.
***********************
So Who Are The Cronies Pictured Alongside The Pretendy Prime Minister?
Source:
Daily Mail
Posted by Gracie Samuels at 9:09:00 PM