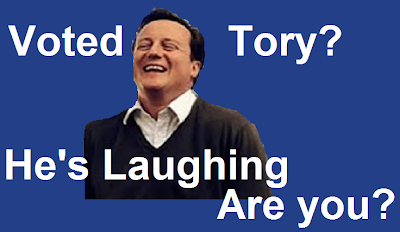 It could be said that nearly everything in every day life is about timing, which is why I believe police detectives when they maintain "there is no such thing as a coincidence". With that in mind the pong that is starting to emanate from Downing Street over former RBS boss "Sir" [no longer] Fred Goodwin being stripped of his knighthood is growing stronger and stronger.

Isn't it all just a teensy weensy bit coincidental that Fred Goodwin was stripped of his knighthood right at this particular time, when David Cameron and his Tory government were on the ropes over their mate (another RBS boss) Stephen Hester receiving almost a million pounds bonus? Am I just a wee bit cynical to suggest that the fact that Fred Goodwin was awarded his knighthood by the former Labour government and this was used in order to try and deflect bad press away from Cameron and Downing Street?  Cameron didn't just phone the queen up yesterday and ask her to do this, David Cameron and the Tories had pre arranged for him to be stripped of his title, a committee had met and already made the decision and the Conservative PM and his director of communications, former BBC editor Craig Oliver were saving it up for use when they needed a big story to divert attention away from the David Cameron. The whole thing stinks of party political pokery!

After David Cameron and George Osborne completely misjudged the mood of the British people and had publicly defended Stephen Hester receiving his bonus and then failed to pin the blame on Labour, they needed a quick political fix and unfortunately for Fred Goodwin he was it!

Don't get me wrong, I believe that Mr Goodwin should have been stripped of his knighthood, but then again I suppose I should say that I believe he should never have been awarded it in the first place! I remain to be convinced about the need for knighthoods and peerages at all - ever. I simply fail to see, or understand the logic why any banker, or any boss of a multinational company should be awarded knighthoods and peerages just for doing their jobs, isn't it enough that they are awarded telephone number salaries, receive golden hellos, golden goodbyes and are awarded platinum pensions and are bunged nice big bonuses of a few million quid in between all that lot? Fred Goodwin was awarded a knighthood for "services to banking" no mention of that fact that his particular "services" to banking involved having to be bailed out with £49 billion of taxpayers money  and that his services to banking nearly collapsed the whole world's economies,  however, it was not just down to him alone, it was him and all his banker mates, so why pick on just one single person? And isn't this [pardon the pun ] the $6 million question!

Why just pick on Fred Goodwin, or was he just a handy scapegoat to be used because the government had placed themselves in trouble? There are plenty of other bankers and leaders of multinational companies that have got knighthoods and peerages and what about those Lords that have criminal convictions and have even served prison sentences yet get to keep their peerages? People Like Tory Lord Jeffrey Archer, Lord Taylor and Lord Hannifield. Here are just a few of Tory peers and Knights and MPs who have fallen foul of the law.

Sir Paul Ruddock - David Cameron awarded a knighthood to Paul Ruddock, who made millions  short selling from the collapse of Northern Rock Sir Paul Ruddick  has given over £500,000 to the Tories. George Osborne has since refused to outlaw short selling, even though it has been outlawed in other EU countries because it can destabilise whole economies.

Gerald Ronson - the property tycoon and Tory donor and time served convicted criminal was awarded a CBE by David Cameron.


Doug Ellis, James Wates and James Lupton received a knighthood and two CBEs respectively, for charitable and philanthropic work. They have given £370,000 to the Tory Party between them.

Tory Lord Ashcroft - Tory donor who has donated millions to the Tory party, but has also avoided paying over £127 million in tax to the UK treasury.

Lord Hanningfield? The 70-year-old former Tory frontbencher falsely claimed almost £14,000 for overnight accommodation in London, when on most nights he was returning home to his bungalow, less than 50 miles away from the capital

Tory peer, Lord Taylor, a Birmingham-born former barrister who became the first black Conservative peer when he took his seat in the House of Lords in 1996, is set to remain a member of the Upper House despite being jailed.


Sir Anthony Bamford  - a Tory party donor.  In 2010, one minute he was being measured up for his ermine robes to enter the Lords and the next he had decided not to accept. probably had something to do with the tax authorities - routinely consulted by the house of Lords appointments Committee - had declined to support his nomination for a life peerage, because of what they'd been confidentially told by the tax authorities.

Tory MP Alan Duncan - Resigned as a parliamentary aide in January 1994 following accusations that he made £50,000 from an illicit purchasing deal on a council house. He was said to have loaned a neighbour £50.000 to buyh his council house under the right to buy scheme and then purchased the house off of him. He is now the shadow secretary of state for business, enterprise and regulatory reform.

Derek Conway  former Tory MP  was suspended from the House of Commons and had the Tory whip withdrawn after it emerged that he paid his son parliamentary allowances while he was still a student at Newcastle University.

Giles Chichester  Leader of the party in the European Parliament was forced to resign his post after admitting breaking the rules on expenses to the tune of almost £500,000.

Neil Hamilton, former Tory MP for Tatton and former corporate affairs minister's career ended in disgrace for his part in the "cash for questions" affair of the 1990s. He faced accusations he had accepted cash from Harrods' owner Mohamed Al Fayed in exchange for asking parliamentary questions. He resigned alongside parliamentary aides Graham Riddick, David Tredinnick and junior Northern Ireland minister Tim Smith, who were all implicated in the scandal between July and


Jonathan William Patrick Aitken  is a former Tory MP for 24 years, and a former Conservative government Cabinet minister. He was convicted of perjury in 1999 and received an 18-month prison sentence, of which he served seven months, His famous quote when charged with his offences was;


"If it falls to me to start a fight to cut out the cancer of bent and twisted journalism in our country with the simple sword of truth and the trusty shield of British fair play, so be it. I am ready for the fight. The fight against falsehood and those who peddle it. My fight begins today. Thank you and good afternoon."


Lord Jeffrey Archer served 4.5 years for perjury and perverting the course of justice, he has served his time, but he should not be allowed to remain a Lord.

Dame Shirley Porter - The former Tory leader of Westminster council was ordered to pay a surcharge of £27 million for her part in the "council home sales for votes" scandal of the 1980s. The law lords said attempts to gain political support by selling council homes in marginal wards to potential Tory voters was "a deliberate, blatant and dishonest misuse of public power"

Although successive ministers have proposed reforms so errant peers could be expelled, there is currently no way of removing them other than passing an Act of Parliament
The ball is in David Cameron's court, he could if he wanted do something about this, but he probably wont as we all know that the majority of people who would be stripped of their titles would probably belong to the Tory party.
The knights and peers from the business world are hedge funders, City bankers, venture capitalists and heads of multinational companies and many donate huge sums to the Tory party - this is why David Cameron will never do anything about this.

The question also needs to be asked; "would David Cameron have had Fred Goodwin's knighthood annulled if it had been awarded by a Conservative government"? This is the Pm who awarded a knighthood to Paul Ruddick a hedge funder whom made millions out of the collapse of Northern Rock!

One of the most striking anomalies about the Tory party scandals is that very few of their MPs were ever taken to court, while Labour MPs were prosecuted for far less. I  lose no sleep over MPs going to jail for what they did, however, justice should be fair and be seen to be fair and when it comes to the Tory party - it just isn't!

If public life is to  be cleaned up then there needs to be greater parity coming from the heart of the Conservative led government and Cameron's habit of awarding honours to large Tory party donors does nothing for the reputation of politics.

Cameron is tough when it is easy for him to be tough but inherently weak at all other times.

This from the Prime Minister who promised us he was going to clean up politics and make it transparent - yeah right.

Also just after the BBC Panorama program on cashcrofts shennanigans