Stop Whingeing and Whining Trevor Kavanagh at the Sun and Take a Dose of Your Own Medicine! 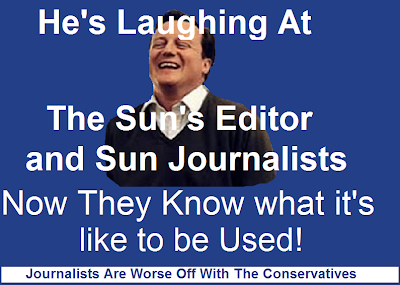 Yesterday a Sun newspaper journalist asked David Cameron at number 10 for a political favour, they "invited  Downing Street to agree that the police had deployed a disproportionate number of officers to investigating allegations of criminality at NI.

Downing street refused saying "It is for the police to decide how they deploy police officers."

How will the Sun newspaper respond to this? For years now they have allowed themselves to be manipulated by David Cameron and George Osborne into attacking the Labour government and blaming them for what was the worse *global* recession for over a 100 years and for the greed of the Tory "doning" fatcat bankers that almost destroyed this country's economy as well as them having a collective effect on the global economy.

The Sun has stood by and said nothing about the clear case of conflict of interests regarding the Tories and David Cameron, George Osborne and health secretary Andrew Lansley and their Tory doning private health care companies and the latest scandal to rock the Tories involving management consultants McKinsey & Co, helping to make the very policies which will put McKinsey clients first in the pecking order to  be awarded lucrative government NHS contracts, should Lansley and Cameron's hated health and Social care Reform Bill make it to the statute book.

In its often screaming vulgar banner headlines, the Sun newspaper has backed David Cameron attempts to use his filthy political tactics to divide and rule this country, in order to get his vicious policies accepted by the British people. They have sought to back the prime minister when he has deliberately set out to pit, worker against unemployed, able bodied people against disabled people, working families against those not working, childless couples against couples with children, private sector workers against public sector workers, the indigenous population against immigrants and immigration. They have backed this government to the hilt when they have mercilessly cut the winter fuel payments to pensioners, despite David Cameron's promise not to on live TV during the leadership debates in the run-up to the May 2010 election, when Cameron famously called Gordon Brown a liar, when Brown had done little more than try to warn people what Cameron was going to do. Cameron was in fact the liar and Brown was telling the truth and yet the Sun newspaper has not even mentioned this, yet if this situation was reversed it would be being screamed at us from repeated Sun headlines day after day after day.

All this the Sun has done for Cameron, Osborne and Clegg to try and get them elected and to try and shore up their future election prospect and so much more, so the question is, how slighted will the Sun editor and his whingeing complaining journalists now feel when they have turned to David Cameron in Downing Street for one small favour and received a very large kick in the metaphorical teeth for it?

If the Sun does nothing it will only seek to prove what a set of cowering whingeing Patsys they actually are, who doesn't like it up 'em and who cannot take the medicine it so readily dishes out to others. If they do nothing then Downing Street will feel emboldened by this and Cameron feeds off of events like this, he will take this as sign of total weakness at the Sun and move to manipulate and exploit them still further.


It will take more than the Sun editor's (Dominic Mohan)  bumper edition of  Monday's 104 page Sun and  Trevor Kavanagh's petulant indulgent tirade to save their faces after them begging number 10 for help and it being refused. David Cameron has right royally shafted the Sun and not for the first time dropped it refusing to help when the news got too hot to handle and in so doing has once again made the Sun look like complete idiots.

What goes around, comes around and the Sun and its journalists are now only just starting to feel the presence of Karma behind them.

Is this the start of the end of the "special relationship" between the Sun and David Cameron and the Tories?

I know there is still much more to be revealed about the Sun newspaper, Andy Coulson, Rebekah Brooks and Rupert and James Murdoch's relationship with David Cameron. Up until now it appears that Cameron with the help of the Sun has managed to keep a lid on it, much to the personal cost of Andy Coulson, who was employed by Downing Street on the say so of former News of the World and Sun editor, Rebekah Brooks.

"The integrity of The Sun and the News of the World started crumbling the moment Rebekah Brooks got her hands on them. Throughout her career, she has had one aim only: self-glorification. She used the papers to promote her own interests, not to break stories or to entertain. Whether it was securing seat A1 on her favourite airline, claiming the best view at a West End show or winning access to the Prime Minister’s inner sanctum, Rebekah would do whatever it took. Good journalism was secondary. When she took charge of The Sun......."


The question is now, will the Sun newspaper and its so-called "fierce" journalists continue to support Cameron and his clown government regardless of their incompetence, poor handling of the economy (UK is now under a negative credit warning from Moody's credit agency) and their perilous Health and Social Care Reform Bill which threatens the health of this entire nation and all that this will entail when it all goes disastrously wrong as 98% of all medical practitioners, clinicians, nurses doctors, medical organisations have repeatedly forecast it will? If they do then they will just become known as a band of Cameron's Patsy's who do and say exactly as Cameron wishes them to. Cameron will seek to use this as a tool to tell the nation that he is not in the "pay" of Murdoch and the Sun and he doesn't mind trampling all over people who have been steadfastly loyal to him to do it either.

I cannot resist taking a little Schadenfreude pleasure at the Sun's whining about their treatment at the hands of the police, especially when the Sun has always taken such great delight when this very same treatment has been dished out to others. Why does the Sun expect to be treated any differently to anyone else? Maybe they thought that all those lavish lunches, dinners, theatre tickets they gave out to the police in exchange for classified inside information entitled them to preferential treatment? Maybe they thought all the help they have given Cameron entitled them to preferential treatment too? Turns out no, it has all been for nothing.

Rupert Murdoch has given assurances to Sun employees that the paper is safe, if I were them I would not be taken that as read. If the scandal at the Sun in the way of  phone hacking, email hacking etc takes any further twists then advertisers will start pulling out and if this happens the Sun newspaper will start to look very shaky indeed.

One wonders then if the full extent of any government involvement will start to be known? Just how did the Sun get hold of those government emails that they published and used to attack Gordon Brown and the Labour government with? How did members of the then Tory opposition come to be in possession of these emails etc? It seems strange that some of them got into the hands of journalists and the Tory party just at the time when Gordon Brown was increasing his poll lead!

At the start of this police investigation into phone hacking etc the police have said that they will not be bringing any charges until their enquiries have ended (doesn't Trevor Kavanagh read his own paper?), if at the end of this charges are brought against Andy Coulson, Rebekah Brooks and the Murdochs an any of the other numerous arrests made over the past few months, we  could then start to see the full extent of any involvement in this whole tawdry affair by David Cameron and George Osborne, especially if Coulson lands up in the dock with his liberty threatened.

Something tells me not only are we witnessing the beginning of the end for the Sun newspaper, we are also witnessing this scandal taking still more steadying footsteps closer right to the heart of the British government and David Cameron the Prime Minister, and Chancellor, George Osborne and by association Nick Clegg (who has also backed this government's incompetence to the hilt).

No wonder then that Trevor Kavanagh is throwing a strop, doing the rounds of TV and radio and crying and whingeing and ranting and raving to anyone that will give him (and the Sun) air time.

The Sun's days are numbered, perhaps it is retribution for helping inflict the likes of the narcissistic, incompetent liar David Cameron upon us, at the expense of a good and decent brilliant man in the former PM Gordon Brown! Perhaps Rupert Murdoch may like to think about that too, if anyone deserves a dose of Karma for stabbing his "friend" in the back simply because David Cameron promised Murdoch BSkyB on a plate (another broken Cameron promise), it is Rupert Murdoch!

The Sun's hypocrisy and sycophantic crawling to David Cameron, George Osborne and Nick Clegg has  at last landed them with a kick in the "proverbials" - and well deserved, I say! made even more delicious by the sight and sound of Trevor Kavanagh's unedifying moaning, ranting and raving.