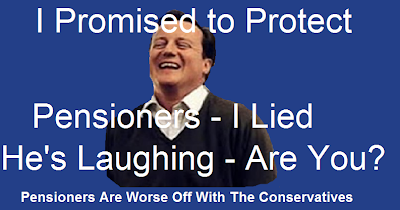 The Conservative controlled Central Bedfordshire council is to start charging elderly people for their Careline service. (Central Beds is also covered by Tory MPs, Andrew Selous, Alistair Burt and Nadine Dorries. Labour has one MP in Gavin Shuker (who was outnumbered). Careline is a service that gives the elderly reassurance, it is a telephone system where they wear a control unit around their necks and have a button on the telephone that enables them to get in direct contact with help should they fall, cannot get out of bed or maybe need other assistance.

The Tories excuse for charging for this vital service? Is apparently they are not the first to charge and some other councils already charge between 50p and £1.00 per week. So in their warped way of thinking CONSERVATIVE controlled Central Beds council think it is OK to charge £4.50 PER WEEK (approximately £4.00 more than any other council) and they maintain this will raise over £200,000 per year! This unscrupulous council obviously see nothing wrong in using the frailties of the elderly to raise funds in order to try and plug the black hole in funding caused by the vicious and unnecessary cuts in funding by the Conservative central government!


The downside of this of course is many elderly already struggling under the the fact that utility bills have soared, food prices have continue to rise and the council have already raised the cost of the Meals on Wheels service to the elderly by a massive 60% and the Tory chancellor has already cut up to £100 off of their Winter  Fuel Allowance, many elderly people are now swearing that they will no longer be able to pay for the service and will discontinue it if they are forced to pay from their already dwindling incomes, many say it is not a case of won't pay, it is a case of just cannot pay.


This charge will almost certainly prove to be a false economy as this will be the last straw for many pensioners who are already being forced to live in poverty by this callous unfeeling Conservative government.


Elderly and frail  people consider this service a lifeline which enables many to stay in their own homes,  thus actually SAVING the council money! If elderly people have to start being taken into residential care for their own health and safety, how much will this cost the council per year? It will only take a relatively small number of  pensioners to be forced into residential care to cost the council in excess of £200,000 per year, where is the sense in this and why is Central beds council charging up to £4.00 per week MORE than any other council who charges for this service?

Conservatives, David Cameron, George Osborne and Nick Clegg have made much about the rise in the state pension, however, the introduction of this one charge in this one Tory controlled council will more than wipe out that rise in pension in fell swoop! More Tory double dealing disingenuously attacking people who cannot fight back.

All this is in ADDITION, to the fact that the Tories in Central Bedfordshire have already put the cost of pensioners’ meals on wheels up by a HUGE 60%.  Now this morning we wake to the news that Tory run councils are also said to be preparing to raise their council tax and the person responsible for the cuts to local council funding Tory minister Eric Pickles is trying fervently to pass the buck. Well  he should not be allowed to get away with this, the Conservative government should not be allowed to get away with this despicable attack on our elderly, the buck should stop with him, it is his Tory government and his Tory councils who are bringing about these situations across this country, through their incompetence and their startling lack of ability to see the bigger picture and the fact that every time they change something it has a domino effect on others services.

This hideous lying government came into power promising to protect pensioners winter fuel allowance, eye tests and free TV licenses, David Cameron blatantly LIED to the elderly. The Tories have already cut the fuel allowance by £50 for those aged 60 to 80 years and for those aged 80 years and over by £100 and now these other benefits may well be means tested in the future which will inevitably mean that many pensioners will lose out.No thought has been given to the medical fact that as we age the more likely it is that we will suffer from hypothermia, so to cut the fuel allowance of those age 80 and over is a particularly callous move, especially as elderly people have little or no sensation that their bodies are becoming dangerously cold and they will either turn down their heating or turn it off altogether and they could collapse before they realise what is happening, and now they will not even have their Careline service to call for help when they are laying freezing to death on a cold floor, it is an appalling, ill judged and ill thought out  and a shockingly horrendous way in which to treat our elderly citizens!


The Tories have done nothing about the elderly living in fuel poverty who are being forced to make a choice between eating a hot meal, or  heating their homes.


The Conservatives have done nothing about the growing number of pensioners now living in fuel poverty and who are struggling to pay the cost of the rise in utility bills which have risen by an average of 19% for gas, 14% for electricity and now we are told water is to rise by 6%.
Add all this to the fact that  despite when in opposition David Cameron promised not to cut pensioners winter fuel payments, the Conservative Chancellor George Osborne,  has already CUT  up to £100  from pensioner’s winter fuel allowance, where will it all end? When pensioners cannot afford the Careline service and fall over and freeze and starve to death in their own homes alone, cold in pain and terribly frightened?

I agree with everything in this report. I live in one on the Central Beds constituencies and the way the Tory council is treating our elderly is a national disgrace and a serious embarrassment to this country. Please keep exposing these dreadful Conservatives.

Hello there, just became aware of your blog through Google, and found that it's truly informative. I’m going to watch out for brussels. I’ll be grateful if you continue this in future. Lots of people will be benefited from your writing. Cheers!
Sorel Women's Cate The Great Boot