Oh the "Success" of "Osborne and Cameronomics" 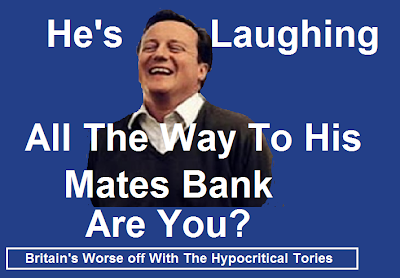 
Corporation tax should be halved to boost business and revive Britain’s economic growth, according to a think tank.
The Centre for Policy Studies is urging David Cameron to cut corporation tax to as little as 10 per cent because it is the “only source of a viable economic recovery”.

Because of course this really worked for Ireland - didn't it?

During the past years Ireland cut corporation tax to the bone with the specific aim to poach industry and multinational companies away from the UK. Ireland almost bankrupted it itself in the process as their tax receipts from these companies plummeted and had a dangerous damaging effect on the Irish economy. Remember here that George Osborne has described Ireland as our friends and neighbours when he bailed  Ireland out with an £11 billion pound loan at British taxpayers expense. Personally I would not describe someone as a good neighbour who poached all our business forcing our people out of work and then bend over backwards to obtain loans at preferable rates for them, especially as Ireland still has not learned its lesson and has not raised its level of corporation tax. If I were in Osborne's position one of the provisos of helping out Ireland, our "good" neighbour out of the hole it dug for itself would have been a stipulation that they raised their corporation tax to match the UK's so giving an even playing field again. However, Osborne failed to do this but hang on wasn't George Osborne the same person who when in opposition travelled to Ireland to "look, listen and learn from the Irish economy" in order to introduce many of their policies in the UK when he became chancellor? All I can say is thank the Lord that Osborne was not our chancellor at this time or we would now be in exactly the same position as Ireland - Oops sorry I forgot we are, George Osborne took an economy with 1.1% growth in Q1 in May 2010 and turned that growth in to negative contraction inside 19 months and he now has the UK looking down the double barrels of a shotgun with a double dip recession looming, we need just one more quarter negative growth and off we go and many top economists are forecasting that, while others are describing the UK as already in a "technical recession". Oh how I love these City folk, a technical recession, a light recession, one that will not last, pity these people who have all been backing Osborne's insane austerity measures to the hilt (despite the fact that lowly people such as us forecast this recession as soon as Osborne announced his plans and pointed out the glaringly obvious) don't loose their jobs.

And the moral of this story is that in Ireland all their services have been cut to the bone and corporation tax is still rock bottom producing hardly anything for the Irish economy and to top that the Irish people have had their national minimum wage cut forcing them to subsidise the multinational companies that their government is already heavily subsidising with low corporation tax. The Irish economy is in recession, austerity measures have not worked, they have been cut, cut and cut now they cannot cut back any more and austerity has failed, what now? More "Osboromics" more Cameronomics"?

Still Osborne doesn't need to worry about a double dip recession, he is still avoiding paying £1.6 million in tax to his own Treasury, he is still allowing the likes of Bob Diamond from Barclays to avoid paying tax and he is still writing off the £6 BILLION owed in tax by Vodafone and Stephen Hester of RBS may have been forced to hand back his million quid bonus for doing sod all, but don't  feel sorry for the "poor man" he sill has his mansion sitting in 350 acres of prime land, he still has his Swiss chalet and his luxurious flat in Knightsbridge and Cameron and Osborne are still blaming the weather, the royal wedding, the eurozone and the Labour party for their own appalling cock-ups, so everything is fine in Tory land, it;s us poor bastards that are carry the can for the rich, powerful and affluent 1% (as per usual)!

By the way don't fall for Cameorn's shifting the blame for Stephen Hester's bonus onto the Labour party, the buck stops squarely at Cameron, Osborne and Clegg's door and here is exactly why;

Hester's contract didn't guarantee his bonus it the bank made a profit. It is the banks remuneration committee that issued instruction for the bonus to be paid, so the previous Labour government had nothing to do with the bonus. The bonus needed to be ratified at the AGM and the government (us taxpayers) as the major shareholder with 82% could have vetoed that bonus at that point or earlier and instead of doing this Cameron and Osborne signed it off. Hester and the Tories only gave in to pressure because the Labour party tabled a vote in the House of Commons and all this would have become common knowledge.

Who said that lies, deceit and hypocrisy wasn't alive and kicking in today's Conservative party?