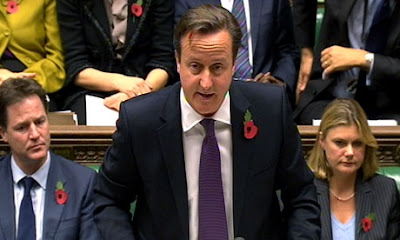 In response to a question about whether the PM's new Australian election strategist and spin doctor, Lynton Crosby has lobbied him on cigarette packaging and alcohol prices Cameron said:


"Lynton has never lobbied me about anything, except how to destroy the credibility of the party opposite, he just gives advice on destroying the Labour party, he's brilliant at that".

Lynton Crosby owns a tobacco and alcohol lobbying company and shortly after he joined Cameron and the Tories, their widely talked about Tory policy on plain cigarette packaging and alcohol prices was surreptitiously dropped from the Queen's Speech.

During PMQs the Speaker John Bercow for once pulled David Cameron up when he started to talk about Labour's policy rather than talk about the government's, (which is what he supposed to do, but very rarely does). However, the Speaker should also have pulled Cameron up about what he said about spin doctor Lynton Crosby. The prime minister is the House in PMQs to answer MPs questions he is not there to make thinly disguised threats to the opposition and he is definitely not there to operate some kind of party election broadcast on behalf of his own party using taxpayers time and money. Even if it were, surely Cameron's job is to point out flaws in policy not to "destroy credibility"?  But at least we now know how low this  arrogant man is willing to stoop in order to get himself re elected!

As Cameron himself has said that "lobbying is the next big scandal to hit politics" the question he was asked about Crosby was pertinent and the Speaker should have instructed Cameron to answer the question about Lynton Crosby and he should not have been allowed to fob the question off by making threats to the opposition. It seems odd that the government were going full speed ahead with minimum alcohol pricing and plain packaging for cigarettes, but as soon as Cameron hires Lynton Crosby who owns a tobacco and alcohol lobbying company, this policy is suddenly dropped and does not appear in the Queen's speech! (Something else Cameron's journalist buddies have conveniently on purpose  forgotten to mention in their hostile right wing rags)

With the prime minister telling so many lies, how are we supposed to know when he is telling the truth? How do we know that he is not lying through his back teeth about Lynton Crosby influencing policy for his lobbying company, when he has lied about virtually everything else?

The first week of June when the PM finally came back to the House after missing 10 PMQs, he started off with telling a deliberate lie about the NHS which he repeated twice. Two blatant lies made all the worse for the Speaker allowing him to get away with it and not least because he had already been rebuked for telling these lies and misleading the public by Andrew Dilnot of the UK Statistics Authority. Why is Cameron being allowed to make political capital out of telling lies in the House of Commons?

In last week's PMQs (19/6/13) Cameron was allowed to get away with opening PMQs with an  unprovoked attack on Labour's policy plan to stop people teaching our children who do not have proper teaching qualifications. Again he was allowed to set the questions and get away with it which is extremely unfair as the opposition has no power of redress and cannot challenge the PM each time he lies.

Once upon a time those who deliberately lied to parliament and misled it resigned, but Cameron and his Government now treat parliament with contempt as they continue to tell lie after lie after lie. Time and again different people from the ordinary like me, to organisations such as Mencap and the UK Statistics Authority and the ONS have proved repeatedly that David Cameron tells blatant lies.

PMQs is not a platform for the Tory PM to use to get the Conservative message across, it is not a platform for him to use for political point scoring or electioneering, it is time set aside just once a week (when the PM bothers to turn up that is) to be used by the leader of the opposition and MPs of all parties to ask questions of the government of the day. The fact that Cameron thinks he can avoid answering questions and ask the opposition questions which he knows they cannot answer or defend and to use this time to deliberately lie to and mislead the public; and deliberately misquote and misrepresent others when he knows they have no chance of defending themselves and correcting the record, is an abuse of his power and it is about time the Speaker, John Bercow stopped him doing it.

David Cameron and his arrogance and his deception and abuse of power is turning PMQs into a farce and Speaker John Bercow is allowing him to bring the British parliament into disrepute - how long is the Speaker going to allow Cameron to get away with this?

John Bercowitz. Family dropped the latter part of their name for reasons unknown. Possibly to escape links to dis-tasteful ex-family members and/or persecution