Cameron and The Telegraph - Risible "Partners" In Shame!


David Cameron calling for calm and putting on his best "top lip curling - most sincere face" pleading for us not to be divided since Lee Rigby's tragic death in Woolwich, is political subterfuge and political opportunism of the most despicable order all rolled into one and that he is prepared to use such tragic circumstances to his own political ends is totally abhorrent. I find Cameron's pleas for unity to be absolutely gut wrenching and nauseating, especially because Cameron and his government (and that includes Nick Clegg and all of  the turncoat Liberal Democrat MPs) have done more to divide this nation than any other person and any other government, and furthermore, they have been doing this from day one of this mongrel Tory-Liberal Democrat Coalition. It has been so obvious and so well coordinated that it could well be an unseen, unwritten agreement between the two Coalition partners, discussed by the all male delegates from both political parties in the wake of the hung parliament after the general election in 2010.

Lately we have seen the BNP and EDL trying to "terrorise" the streets and take control of them apparently from Muslims and in so doing they attack the British police (such bright sparks).  Many BNP and EDL  members have found a home behind the thinly veneered face of Ukip, and while I do think this is an unintended consequence,  David Cameron has to take much of the blame for this happening as he and his tawdry, lying deceitful, corrupt government and the Tory supporting press have actively encouraged this kind of behaviour with their incessant attacks on immigrants and welfare recipients, so much so, that now some impressionable people think that it is OK to attack ethnicity and that it is OK to attack the poor, the disabled and vulnerable etc, because they see Cameron, Osborne and Clegg and Tory supporting press all doing it on a regular basis. Also what does it say about the Tories that many former Conservatives have joined Ukip and even some Conservative MPs currently want to form a pact with Ukip? Ukip the party that has been exposed as having 'unvetted' BNP and EDL members in their midst who show images of US president Barack Obama and his wife mocked up to look like chimpanzees and whose fb page contained racist jokes about destroying mosques, burning Muslims and knocking over a Pakistani with a bus? It is not racist to discuss immigration and welfare etc, but it is socially reprehensible to discuss it in such a way that it causes offence and misunderstandings to gain a political advantage out of it!

I am sick of seeing the press pussy footing around this subject and never actually reporting the truth, so let's just say it as it is, David Cameron may not be a racist, but he is not averse to using the tools of racism and the tools of social bullying to get him what he wants - votes! Why else would he employ tobacco and drinks lobbyist Lynton Crosby as his election strategist? Lynton Crosby the man alleged to not being averse to making a few racist comments about Muslims  himself?

I liken this hideous government to a political pincer movement, attack immigration on one side, while attacking welfare on the other, trapping the poor, disabled, vulnerable, low waged and unemployed in the middle and squeezing the life out of them, blaming them for all society's ills and offering them no hope of escape, just a long protracted death and the longer the better, because the longer it goes on, the more political mileage the Tories and Liberal Democrats can gain out of it for themselves. And all the while it goes on, the greedy Tory bankers, the Tory hedge funders and the leaching multi national corporations, (the faceless people who actually did much to help cause the global financial recession) are allowed to escape without one single prosecution, and yet Stephanie Bottrill, a grandmother who was forced to pay money she simply did not have in the hated Tory bedroom tax, and a man in Bedfordshire that owed Central Beds Council £1,300 in council tax arrears have committed suicide and hardly anything is said about this and yet these two desperately sad cases are the tip of the iceberg of how this government's policies are actually killing our citizens. If these cases and many like them do get a mention and are reported in the hostile Tory supporting press, the journalists spin the stories to blame the victims and their families and steer blame away from where it really lies - right at the heart of the British government! See Calum's List for the truth, I promise it will open your eyes!

Today, as if to prove everything I have written, the Tory supporting, (ordinary person hating), right wing newspaper, The Telegraph, have run a report on where your tax goes to pay for welfare in what appears to me to be a disingenuous and deliberately misleading way. It looks like yet another ignorant product of sloppy journalism  in a thinly veiled divisive and stigmatising attack on the recipients welfare. The Telegraph make a list of where tax goes and what it pays for, yet they use the statistics spun in a underhand way devised to deliberately occlude the biggest welfare expense of all - pensions. Pensions are by a long way the biggest spend and the biggest problem facing this country, yet the Telegraph want to gloss over this and try focus people's minds towards yet another underhand scathing attack on immigrants and the poor and vulnerable, blaming them for the problems in this country they simply did not cause.

Why does the Telegraph do this? 1) Because a lot of their readership is probably of pensionable age. 2) They seem to have picked up a lot of crazed Ukip supporters which they seem to be too scared to upset. 3)  If the Telegraph did truthfully focus peoples minds on pension payments alerting them to being the biggest expense in the welfare bill, people would quite rightly stop scapegoating the poor, disabled, vulnerable and immigrants, but if they did this, then  this probably would not fit in with their Tory bias agenda and that is their one dimensional tunnel visioned mission to have people believe that everyone on welfare is either a "shirker, skiver" or "benefit cheat"! When nothing could be furthest from the truth, as the vast majority of people in this country are decent honest and given the chance extremely hard working, they are not welfare cheats or skivers at all but this is not the impression the Tories or their Tory supporting editor mates want to propagate, it doesn't fit their agenda! In fact many of the people now on welfare are there as a direct consequence of this government's insane policies! Cameron making emotive statements like this:

is not only completely untrue as benefit fraud is approximately £3bn, the words are carefully chosen to stoke up resentment between ordinary people and it is this resentment that we are now seeing spilling onto our streets and it is a highly dangerous game that Cameron and his mates in the press are playing!

Of the welfare spend approximately 50% is spent on pensions. It is not only morally indefensible for the Telegraph to give the impression that Britain's welfare bill is out of control because of a *minority* of idle work "refusniks" and those who cheat the system, but it is simply mathematically incorrect! If we are to come down heavily on those who do cheat the system, then perhaps we should also come down just as heavily on newspapers and those in public life who deliberately falsely misrepresent figures and statistics? Take bows David Cameron, George Osborne, Iain Duncan-Smith, Jeremy Hunt, Grant Shapps etc, all Tory cabinet ministers who have recently been rebuked by the UK Statistics Authority for deliberately presenting  figures in a way which has  deliberately misled the British public.

In the same vein perhaps the Telegraph should be reported to the Press Complaints Commission for publishing a report they knew did not contain the whole facts and for deliberately trying to stoke up division and unrest between the people of this country, by deliberately publishing misleading figures? 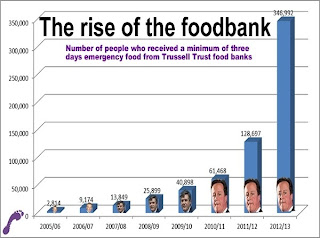 wing press are playing, but I know it is an extremely dangerous and divisive one. It's not only a game that will eventually bring fear, chaos and rioting onto our streets, it is a game that will see an end to state funded education, it's a game that is overseeing the full-scale privatisation of our NHS and our police, fire and ambulance services and it is a game that will see thousands of homeless people wandering our streets, it is a game that will see lengthening queues at soup kitchens and families forced to go to an ever increasing number of food banks to try and feed their families  and it is a tragic game where children will end up being taken into the care of social services because their family has become homeless through this government's insane policies and or can no longer feed them. clothe them, keep them warm or house them - it's a game that is a horrendous recipe for social catastrophic disaster in our country, and it is a game of division and fear and scapegoating of the innocent most vulnerable which is willingly played by David Cameron, George Osborne and Nick Clegg and their mates in the Tory supporting press, just so they can stand a chance of getting re-elected.

It may be unpalatable and something real people are loathe to do but it is a game that all those with a social conscience must take part in because we have no choice and we can use social media to win, because losing is just not an option. We can slay these risible politicians and we can show them, they work for us, not the other way around.

It's time to stand up and be counted people!

Then get your eyes tested.

The British people do something?, yeh their so gullible they would swallow any old crap and take it as fact....Oh they have already what I'm I saying.

They are either deaf, blind or just don't care, because anybody can see that these cuts are attacking those poorer than ourselves and it is all to do with political hatred of the working man and woman.

Bedroom Tax, Tax Credit cuts (work will always pay), Legal Aid cuts so you can't defend yourself against the likes of THE SANCTION CENTRES (Job Centres they are not) when they unfairly stop people's benefits...surely this is a breach of that persons Human Rights to be starved and even made homeless by their own Government.