Tax Dodging & Tax Breaks for the rich? Must be Another Tory Government!

And when are the Tories going to change the "It's all Labour's fault" record? 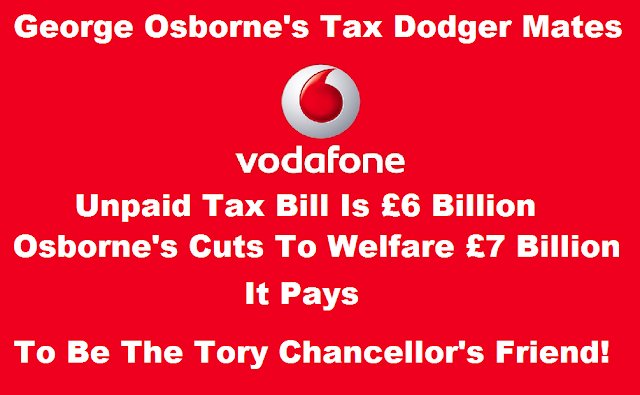 To hear David Cameron, Osborne, Clegg and assorted partisan by-products of this Tory-led Coalition government still insist on blaming the previous Labour government for "this financial mess" is becoming really tedious and not least because it shows two clear reasons why the current government should not be in charge of running this country.


Yet the Conservative party and this Coalition government aided and abetted by Clegg, Cable and Alexander and all the Liberal Democrat MPs want us to carry on believing their lies and their deliberate misleading and misrepresentation of the facts because it suits them to do so and gives them the freedom under their manufactured excuses to rid the country of the NHS, the welfare state, state education, and to deliver us a privatised police service and greatly reduced and compromised military. It also allows this disingenuous government to divert attention away from the Tory supporting bankers, shadow bankers, private health care companies and the Tory supporting big businesses and corporations like Vodafone for example, at the same time as placing unfair onus on the people, nurses, lollipop ladies, dinner ladies, public servants, cleaners, refuse collectors, who were NOT responsible for this "mess" to force them to pay for cleaning it up.

It's telling that not one Tory supporting banker has been prosecuted for their part in the economic downfall of this country or for their part in the economic downfall of most of the world's economies. Other people in other countries have been prosecuted but none in the UK. Through their greed and lust for yet more money and more power they have delivered us all a huge a toxic pit of debt and they now expect the ordinary people in each of these countries to pick up the tabs for the mess they have created.

Of course the British Tories do not want people to know the real truth of what lays behind the global crash because they know that it is the very thing that they believe in, it's the very tenet that their party is built upon. "Conservative capitalism".  The Tories know fully well that it is global conservative capitalism that has produced the mess in each country. They know it is bankers, stock brokers etc playing  about and gambling with telephone number figures on spread sheets on the world's money markets that has really got us into this mess.

The Tories do not want us to know this so they do what the British Conservative party always does, they find a scapegoat and blame it all on them! In order to divert attention away from where the blame should really lay, they have made the Labour party, the poor, the vulnerable, the unemployed, the low waged, and the disabled their scapegoats, and now they are shamelessly using us all, not only to blame for the mess they have made of our economy but are also taking the opportunity to take away our public services like the NHS, welfare, state education, further education, university places which the Conservatives have never wanted. In order to get these policies through David Cameron blatantly lied about being the new "compassionate Conservatives" and as soon as they got power they began their mission to strip us all simply because they resent paying tax for it.

In the past few years many of these people have moved their huge cash reserves to off-shore banks where the British Treasury cannot touch them and among these people are those who actually donate large sums of money to the Tories to try and help keep them in power - why do they want to keep the Tories in power? because it suits them to do so and while the Tories are in power, none of the people who are truly responsible for the state of our economy will face prosecution. Even members of the current Conservative cabinet have off shore accounts and have been transferring their wealth into the names of their spouses to avoid paying tax! Even David Cameron's late father used off-shore umbrella companies to make the family fortune the same fortune that Cameron inherited. They do all of this and yet it is made light of in the Tory supporting press, yet the same Tory supporting press wastes no time in attacking those who they see as "benefit cheats, shirkers and scroungers" etc they use one sensationalist story and blow it right our of context to make it look like everyone who claims welfare is some how a cheat, while virtually ignoring all the Tory supporting bankers, shadow bankers and corporate tax avoiding cheats!

But if you are self employed or run a small company, don't expect any help from George, he only helps his mates in the banking industry, big business and multi-national corporations, if you g have a problem with your tax, you will be pursued to within an inch of your life and threatened with bankruptcy, bailiffs and ruination, as "good old George" has instructed HMRC to squeeze you until your proverbial pips squeak!

For the last ten years Vodafone have been fighting tooth and nail to avoid paying the UK [Labour] government around £6bn in tax. Court case followed court case, and eventually HM Revenue and Customs won a decisive victory. Vodafone were on the ropes and all that was needed was a couple more government knocks to finally make the communication giant pay up. But instead of forcing through the deal, the exchequer, run by George Osborne, let Vodafone off. It was one of the most shameless, blatant and costly examples of corporate-government cronyism in years. But at a time when the government are insisting upon massive cuts in public spending, the deal is particularly hard to swallow.

Vodafone are relatively open about their motivations. “The maximisation of shareholder value,” their website declares, “will generally involve the minimisation of taxation.” In India too, Vodafone have sought to avoid a further £1.6bn tax bill. However, the Indian authorities, unlike the British, have successfully pursued Vodafone for the money, forcing them to pay up.  Read More: UK Uncut

Osborne has been very generous to top earners and all of his mates in the cabinet too, he has given them a tax cut saving them around £100,000 per year in tax while forcing poor people to lose benefits, child tax credits and forced unfair unworkable taxes like the bedroom tax and benefit cuts on the poor in order to pay for it all. Vodafone's unpaid tax bill is over £6 billion and Osborne's cuts to our welfare budget is over £7 billion! George Osborne actually lobbying and threatening the Indian government  on behalf of Vodafone over its tax matters.

While if you are made unemployed you will be forced to work full-time for your job seekers allowance (approx £71.70 pw) at one of George Osborne's mates large companies like Poundland, or Argos, or Tescos etc. You get all the pain and his mates get all the gain (which is your labour for absolutely nothing), as the taxpayer picks up the bill for your JSA, which is giving Osborne's mates another nice little earner compliments of the Treasury and us mugs, the taxpayers!

From 2012 offshore financing structures such as Voadafone's, for instance were supposed to be taxed at no more than 5% (this is actually in the statute books), yet now we learn that even this paltry amount of tax didn't happen as George Osborne instructed that Vodafone be allowed to avoid paying tax for yet another year, despite making a revenue of over £40 billion this last tax year! George Osborne and the British Government is actually subsidising the largest companies to send billions of pounds into the world's tax havens and meanwhile we are supposed to believe all his and Cameron's guff, bluff and bluster about getting strict with tax avoidance?

Remember David Cameron in Davos said that businesses are "setting up ever more complex tax arrangements abroad to squeeze their tax bills right down....Well they need to wake up and smell the coffee", well obviously George Osborne thinks that Vodafone and other multinationals need not heed Dave's words and nothing has changed, it is all talk tough then and it is still talk tough now at the G8, but that's all it is, talk and with the Conservative government that is all it ever will be ....talk!

We have this ridiculous British government talking up trade with China and totally ignoring the massive bubble that is about to burst there, China is on an unsustainable path, their credit bubble is swelling and the Chinese government are building huge shopping malls and apartments that no one a can afford they have become known as "China's Ghost Towns and Malls", (see video below) it's inevitable that this will not be able to go on for much longer. China has now surpassed the US as the world's biggest manufacturer, we do considerable trade with China in raw materials etc, they are also probably single handed keeping our motor industry going.  It used to be said that when America sneezed the rest of the world caught a cold, I dread to think what the rest of the world is going to catch when China sneezes! Yet David Cameron and gormless George appear totally oblivious to this impending danger and rapidly swelling credit bubble.

I've mentioned on here before, the Conservative party is not a proper political party, it is merely the political wing of the banks, the shadow banks, big business and multinationals. The ruination of our public services will be entirely the fault of big business and the their political wing the British Conservative party. The privatisation of our NHS, state education and welfare will be sacrificed so these establishments can pay little or no tax. While we pay more for less and will be powerless to do anything about it as we are having our workers rights removed, our human rights and our rights as citizens and we are losing our public services. We will not even be able to challenge the establishment in the courts because the Tories have removed and cut most legal aid, rendering the legal process beyond scope of us ordinary folk. If you think this is bad, wait until you or you family needs medical treatment and you have no medical insurance, you'll be lucky if you are treated in some poor hospital somewhere "St Elsewhere". Wait until your children cannot afford a home and there is no social housing, because our idiot chancellor is not building nay but is borrowing more to subsidise his mates payroll bills in the big corporations etc. To say nothing of the credit bubble he is creating with his help to buy scheme, the scheme that allows foreigners and his rich mates to borrow cheap money from us the taxpayers to buy second homes.

This is the truth and it is this truth that the British Conservative party do not want us to understand.