The Battle of the "Swivel-Eyed Loons"! 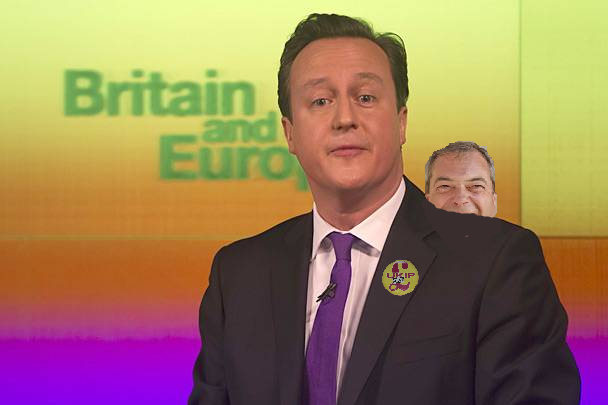 The farce over the Ukip threat to the Conservative party trundles on, day after day after day, it is now affecting the running of day to day business of this government, exposing the the deep splits within the Tory party and their infighting has almost reached implosion pitch. The row completely overshadowed his recent trip to Washington, where we had the bizarre situation of the President trying to help dig Cameron out of a hole!

David Cameron has not only lost control of his party, he has lost control of the government. The Tories right wing and ultra right wing factions fighting like ferrets in a sack is having a detrimental affect on the running of this country, as well as rendering the UK a complete laughing stock in the face of the rest of the world!

The Tories have become all consumed with fighting each other, yet the one theme runs through them like a stick of  Green Party Brighton Pavilion rock, is their desire to win the the next general election. Never mind that their incompetence and their disgraceful public backbiting and infighting and their obsession with Europe  clearly demonstrates that they are not fit to run a sweet shop, let alone be responsible for this country and our peoples lives!

Nigel Farage doesn't need to be an MP at Westminster,  he is already running the Tory party and dictating government policy. The man who hates the EU so much that  to satisfy his own xenophobic whim he would risk the livelihoods of millions of British citizens by pulling the UK out of the European Union, is bizarrely an MEP in the EU which he professes to hate so much! Farage is also on the EU fisheries committee and would expect him to realise how important this country's fishing industry is, yet out of the last 30 meetings he has been present at only one meeting - so much for representing British interests! The man is a boozing fag smoking joke who Cameron has allowed to all but in name run the Tory party and this country!

The Tory party and the Tory led coalition government has now descended into complete chaos and it is now the Ukip tail wagging the Tory dog and normal government business is being completely overrun by infighting.

Cameron has shown himself to be incredibly weak and ineffectual, by giving in to successive ultra right wing demands. At great risk to inward investment into this country at an exceptionally vital time for our economy and our people, a panicking Cameron promised the right of his party an in or out referendum! This is not the way Government should be, it should be country before party every single time, obviously Cameron couldn't care less about this as since then he has made a string of concessions  which never quietens the Tories for long, as they pocket the latest concession and then ask for the next one and now as the Ukip threat has materialised it has the anti EU, anti gay marriage "swivel-eyed loons"  at each others throats again!

David Cameron has his own special names for people, 'swivel-eyed loons' is apparently what he calls his right wing Euro-sceptics and of course we all know that he refers to Ukip members as as a "bunch of fruitcakes, loonies and closet racists" obviously  forgetting that quite a large majority of his right wing MPs and Tory supporters in general are actually "closet Ukippers". Cameron and his 'swivel-eye loons' also have a name for the unemployed and disabled whom he often refers to as "skivers and shirkers" or "benefit cheats" etc. It seems that his right hand man Lord Feldman (who Cameron made a Lord shortly after assuming power in 2010), may share his friend's love of the neologism, as not to be outdone, according to two journalists from the national press he (or someone else) apparently referred to Tory party grass root activists as 'swivel-eyed loons' and is hasn't gone down at all well!

Not content in forcing the Queen to make an unpleasant attack on immigrants by turning the Queens Speech into some kind of Ukip manifesto rant against immigrants, Her Majesty's Government is made up of openly warring right wing Tory MPs, ultra right wing Tory MPs, and ultra, ultra right wing Tory MPs (who wish they were really Ukip MPs) all slugging it out to see who can out right wing each other. If that wasn't enough, the Tory grass root activists ('swivel-eyed loons') and already up in arms about Cameron's leadership etc, are apparently leaving the Tory party in droves and joining Ukip, and those who are left are demanding Cameron pull out of the EU and drop his gay marriage bill!

Meanwhile the country teeters ever closer to falling off the edge of a economic cliff . However, we are supposed to be seeing green shoots of recovery according to the outgoing Governor of the Bank of England, Mervyn King, the man who says the BofE must remain out of politics, but has been regularly climbing into bed with the Tories. The trouble with Merv's forecasts is, that not once has he ever got one right!

Unemployment continues to rise despite the fact that this government have come up with a whole myriad of ways in which to massage the figures down.

The Tory Health & Social Care Act of 2012 is causing mayhem in the NHS and in Accident & Emergency Departments the length and breadth of the land. NHS 111 replacing the perfectly good and extremely efficient NHS Direct is not working and is adding to the pressure. The Health Secretary Jeremy Hunt hasn't a scooby do what he is doing or when he is supposed to be doing it, he is currently running around telling overworked, pressurised staff that we need more nurses, apparently completely oblivious to the fact that it was his government that is responsible for getting rid of 5000 nurses since they came to power!

The education secretary has managed to insult the country's teachers and head teachers and upset them reducing them to tears with threats of bullying and intimidation and the Work and Pensions secretary has introduced the bedroom tax which is unfair and unworkable and is now either forcing people to commit suicide or attend one of the ballooning number of food banks being set up to try and feed the population who now have no money, due to the government's welfare reforms and trying to force them to pay out from money they simply do not have. Others on low wages are being forced to pay council tax for the first time and if they cannot increase their work hours they are seeing their tax credits cut. The disabled are being subjected to immoral unreliable Atos interrogations and having their DLA removed and their cars taken away from them. (Why doesn't Cameron and IDS just order them to be knee capped?)

Cameron has only done one  PMQs out of eight - George Osborne hasn't answered questions in the House for coming up about 3 months now, and has anyone noticed how quiet George is being over #swivelgate? Resident Tory thug, London Mayor Boris [break the ribs of journalists] Johnson, has so many different opinions on the EU that it appears he is doing a one man Hokey-kokey  " are Eu in out, in out, - shake it all about".

All this and so much more (far too much to mention here) and all we see is the continuation of the Tories delusional obsession with their soap opera which is the EU! The PM's answer to his ever growing right wing backbench rebellion is just to let them fight it out in public. After rebuking Gove and the Defence Minister Philip Hammond last week for saying they would vote to withdraw from the EU, Hammond (suitably "chastised" - not) turned around and lobbed a metaphorical hand grenade on Cameron's gay marriage bill causing more explosions in the potent EU mix, and Gove's answer to his leader was to insult the country's teachers live on national TV, for which he was booed and heckled, and all this is being played out on the world stage acutely embarrassing the country's standing abroad (and not just in Europe), very, very damaging.

And the Liberal Democrats answer to it all? Well to do what they have done from day one and just keep backing the Tories, no matter what they say, or what they do or how much they are now endangering the public and embarrassing this country.

I think this is the beginning of the end for the British Conservative party as we know it. It could be that it is about to split not two, but three ways. First the Liberal Democrats will walk and break the coalition up as they realise backing Cameron over a referendum would be just one hypocritical step too much (especially as the general election is fast approaching). Then after huge public fights and blood letting the right wing Tories will split from the ultra right wing Tories and stay with Cameron, the ultra right wing Tories will split from the Tory party and form their own party, and the ultra, ultra right wing Ukip Tories will join Ukip. In any event we will have an early general election as the public lose patience and confidence in this appalling incompetent split asunder Tory Government.

Thank goodness for Ed Miliband the Labour leader, who is the only leader to be actually leading (not following) his party. It would have been very easy for Miliband to try and cash in on the Tory furore by offering a referendum or trying to force the Tories to bring the supposed 2017 referendum forward, but he didn't, his position is clear, he is not going to damage this country for the sake of his own and his party's narrow political interests, he is going to do what he thinks is right for the country at this time. Which is negotiate Britain's terms when the time comes and not threaten vital inward investment at a time when the British economy is flat lining. It took guts and strength to stand in the face of an adverse hostile press, who have done nothing but try to belittle him (even though on all the big questions it has been Miliband who has been correct) and face them down.

What a pity that David Cameron doesn't have the intellect, the integrity, honesty and strength of Ed Miliband.

To coin a phrase "Ed Miliband leads his party, David Cameron follows his"!

Yes they are good points Gracie

Come back and say that after the next general election, which is now probably a lot sooner than 2015.

I'm sorry why party is Miliband in, not to sure anymore he backs the Tories on most things especially disability.

Tory labour can anyone tell me the difference

So Anonymous 10:37 back that up with cold hard facts.