Cameron Has Let Ukip Genie Out Of The Bottle! 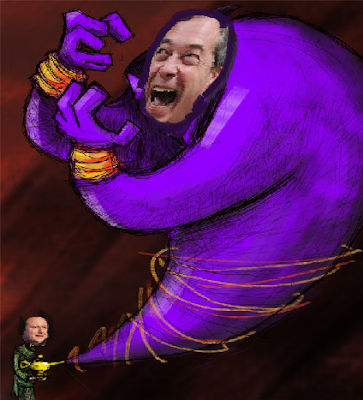 Ever since the Tory led coalition came to power they have sought to divide society and pit people against each other for their own political agenda. Wallah they have almost succeeded!

By turning people against each other and indigenous population against immigrants, able bodied people against disabled people; employed against unemployed, private sector against public sector, young against old, couples with children against single parents and turning large sections of society against poor people, and by blaming poor people for being poor, this government deliberately set out to create an uneven unpleasant bigoted narrow minded society. Austerity has very little to do with what the Tories are doing, except it is a useful tool they can use to beat people about the head with and make it appear like they are forcing the "skivers, the malingerers, the benefit cheats, the scroungers" etc etc to pay their "fair share" and to try an garner support from those they are openly deceiving. The Tories have ploughed the land and made it a fertile growing plot for parties like Ukip to grow and flourish.

David Cameron, George Osborne, Nick Clegg, Iain Duncan-Smith, in fact the whole cabinet are guilty of deliberately whipping up hatred to suit their own political agendas. Using phrases like "making work pay" except of course they are not, because they are attacking the low paid who are actually IN work and forcing them to pay for the greed of the Tory doning bankers and corporations. This agenda started immediately they assumed unelected power in 2010 in order to win the next election in 2015 outright, it is of course why they decided to fix 5 year terms on parliament, they knew they needed longer to get inside peoples heads. They don't care who or what they have use to achieve this goal, whether it is their useful idiot poodles the Liberal Democrats, or people they have deliberately scared with their scaremongering, the ordinary folk who work the shifts in factories and hospitals and who work in shops and offices, refuse collectors, road sweepers, lollipop men and women etc have all been used by David Cameron and George Osborne to further his and the Tory party's political ambitions and they don't give a damn who they hurt in the process.


Cameron is guilty of pandering to the extreme right wing of his party and has been gradually lurching further and further to the right in order to try and pacify them, promising them referendums on the EU which he has no intention of keeping and he retains the Liberal Democrats solely because they are keeping him and the Conservatives in power.

Cameron and Osborne carelessly and selfishly loaded up the immigration and welfare gun  intending to use it for furtherance of their own right wing ideology and then stupidly allowed Ukip to get hold of it and now Ukip have started to fire it and use it and the Tories have no idea how they are going to stop them! The Conservatives have created a multi headed monster in Ukip, the Genie is well and truly out of the bottle and I doubt it can ever be put back in and the losers in the fight of the right wingers trying to out right wing each other, will be us, the ordinary folk of this country, who will once again be left picking up the pieces of a Tory government's horrendous mess.

How will Cameron react to the Ukip threat which he has stupidly brought down upon his own shoulders? How hard is it going to be for him to get his former voters back, who now see themselves as supporting an established party in Ukip?  Does cameron even realise just how hard that is going to be? Cameron now has to use his judgement and that in itself is worrying as it is well known that David Cameron doesn't have  judgement and will almost certainly lurch even further to the right. Cameron will go down in history as the unelected prime minister of a mongrel coalition government who was  responsible for breeding the underlying racial and social tensions in this country and for succeeding where Hitler failed, by turning working people against each other and also creating a poor socially cleansed underclass. Cameron is slowly driving down peoples standard of living and removing their working and human rights, he is also removing any vehicle they once had in which they could claim against the establishment, soon people will have nothing and have no one who can help fight with them and for them. We are slowly being controlled by a right wing government which  is not a real government it is the political arm of the banking sector and the big corporations, who want to remove any rights their employees have. Why else is Cameron and Osborne doing THIS?  "Here is the final wicked twist: legal aid has been removed for advice on benefits, housing, divorce, debt, education and employment.Last month the budget of Citizens Advice for such cases fell from £22m to £3m. The few emergency cases still covered – families facing instant eviction – can only use a phone service, not face-to-face legal help. Law centres will close. There will be no help on school exclusions, landlord or employer harassment, or failure to pay wages." Guardian

This government is providing a false sense that the cuts are being fairly and evenly spread and nothing could be further from the truth. See Bedroom tax.

How much more of this will people blindly accept before they wake up and realise what this shocking incompetent government is doing to the people of this country?


This is a famous poster, produced in the 1930's in Nazi Germany, it was used as a propaganda tool to victimise the disabled. Very loosely translated it says; "60,000 RM [Reich Mark] is the cost of a lifetime hereditary illness and people that is your money". The poster was used to turn the German people against disabled people by encouraging taxpayers to view the disabled as a burden upon the State - Sound familiar? How long will it be before the Tories new election strategist (Lynton Crosby) starts ordering poster campaigns against the disabled, the poor, the unemployed etc in order to feed peoples fears and insecurities?

This is what is happening today in this country, this is  the dangerous game that David Cameron and the British Conservative party are playing and this is the loaded gun they have handed Ukip!

Make no mistake, the reason why Ukip were able to do what they did in last Thursday's local elections was because of the fears that David Cameron and his cohorts in government have deliberately whipped up. Cameron and the Tories have deliberately fanned the flames of right wing ideology for Ukip and now the Tories have lost control of their own right wing agenda because Ukip has stolen it and is running away with it.

You would think that our so-called "free" press would try and accurately report on what the Conservatives are doing but no, the hostile right wing Tory supporting media are actively helping them do it and producing scaremongering banner headlines deliberately thought up to scare people and to mislead them and the BBC and most of the broadcast media have joined in too. Instead of trying to expose what this government are doing, the right wing press and broadcast media who all have their own agendas have actually published and broadcast the hate speeches of Cameron, Osborne and Clegg, Iain Duncan-Smith and other leading Tories, speeches that deliberately set out to distort the truth and deliberately mislead the public.

The reason why the press are not reporting Cameron accurately and are NOT informing the public about what is really going on is the fact that most of them are actually in cahoots with David Cameron and list the PM among their closest friends, so how can they ever hope to report accurately on what this government is doing? See HERE.

The Tories are socially cleansing our towns and cities of disabled people, poor people, unemployed people and immigrants and the elderly and they don't much care where they go or end up, or even if they have a roof over their heads. They are turning the public into a nation of malcontents using a witch hunt engineered in Downing Street. The whole process is being furthered by their mates (the editors) in the right wing press who appear happy to carry out divisive malicious campaigns against vulnerable people who find it extremely difficult to fight back.

Ukip is the party that ex BNP, NF and EDL members find no problem supporting and not one single newspaper has asked why?  Now Ukip have got hold of that mantle hate invented by Cameron and the Tories and goodness knows where it will all end up!

"Well done" David Cameron for taking an extremely dangerous gamble with the psyches of the nation and losing and now you've let the Ukip Genie out of the bottle - what now? What next? Whatever it is, there are those around who will not allow you to get away with it, make no mistake about that. You David Cameron and the Tory party will be found out, for certain you will.