Welfare to Work - Government Misses It's Own Low Target 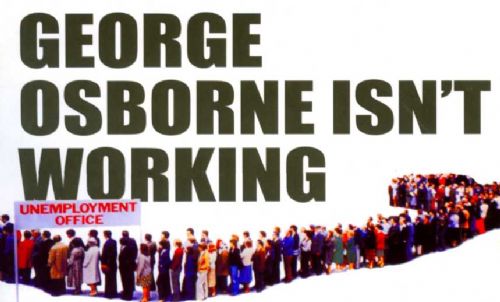 Official figures show that the Tory controlled government's flagship welfare-to-work programme has failed to hit its own target.
Under the scheme companies and charities are paid around £14,000 for every person it finds work for.

If the government had done absolutely nothing at all, the same number of people would have found themselves jobs.

Under the previous Labour government's successful jobs for the future work programme more people were found proper jobs. Prime Minister, David Cameron's reply to this was that Labour's programme was too expensive! I know he doesn't do detail and figures very well, but even by David Cameron's not very exacting standards, that was a pretty silly comment. It cost far less in terms of getting people back to work and having them contribute tax and national issuance etc, than it does for the £14,000 per person that the Tories are paying scandal hit back to work companies like A4e!

The government says the scheme needs more time, but back in June 2012, companies like A4e had still only managed to get 3.5% long term unemployed back to work, if anything the situation at A4e has got worse since the summer and not better.

The taxpayers are paying companies like the scandal hit A4e to produce results and so far they have totally failed. I would also like to know how many people A4e have actually put into work in jobs that exist and how many are made up! Previously auditors found A4e management instructing staff to claim for putting people into jobs which did not exist and into jobs which did not qualify for payment and fabricating paperwork. This is yet another way the unemployment figures can be manipulated, no wonder the government is loath to do anything about A4e!

Another bare faced lie David Cameron told today in Prime Minister's Questions (PMQs) was that the number of those claiming job seeker related benefits had fallen, this was a bare faced lie! The number of long term unemployed and claiming unemployment related benefits has reached an all time high and to ad to that we have another startling fact, there are now more people in work claiming Housing Benefit and tax Credits than there are people claiming out of work benefits. The whole system is in total chaos and this is *before* the massive unprecedented reform of Universal Credit kicks in next year!

With the implementation of Universal Credit, and a much tougher sanctions policy for those people unfit for work on Employment and Support Allowance (ESA), things are getting very tough and very frightening. Only 1.5% of people from this group were found work. Referrals to the new ESA claimant group are very low and successful outcomes in the hundreds rather than the thousands the government expected. This means that some disabled people are failing to get the tailored help they require and were promised and how can you make people that are too sick to work, suddenly pick up their beds and work? Why is the government "scratching its collective head" over this fact? They have been repeatedly told by various disabled groups that people are too sick, or too disabled to work and even if they were able to work the employers offering jobs for them are just not there.

For those on Job seekers Allowance (JSA) as well as those on  ESA, it will be providers such as scandal hit A4e who police claimants' job-searches and refer them for sanctions. These companies do this already, however, with Universal Jobmatch they will have even more influence than they currently have.
As the government keep banging on about "something for nothing" and are using the taxpayers money to fund their failing back to work scheme. Also why is the public and journalists being denied information on government contracts with A4e and why information on Freedom of Information requests been heavily redacted on the pathetic excuse of commercial confidentiality? It's taxpayers money, we have a right to know!

It cost approximately £5bn per year to pay out JSA claims and the government frequently infer that people are just "lazy feckless scroungers" whose "blinds are still down" when others are going to work and if they do not meet a whole raft of insults and conditions then sanctions will be applied that may last up to three years, yet Work Programme providers are being paid over £5bn a year and we all now see they have spectacularly failed. Yet far from the government applying sanctions to these companies, they are actually defending their appalling record. Former boss of A4e, and friend of David Cameron's, Emma Harrison has personally been paid £8.6 million in one year alone. According to DWP figures 510,000 people have had their benefits sanctioned, while Emma Harrison gets off Scott free.

This back to work scheme isn't working because it cannot work, it is in chaos just like everything else this government touches or interferes with. Blaming the victims for this government's mismanagement and barking mad austerity and ideological driven measures is totally ridiculous. Out of work benefits represents approximately 15% of the entire benefit bill. it's a sledgehammer to crack a nut and it is failing - big time!

Virtually every Tory and Lib Dem MP has given a different figure and a different set of statistics. Matthew Hancock on BBC Daily Politics show today was gabbling on about a figure of 200,000 that had been helped back into work, where did he get that from, think of a number double it and a few naughts?  If Tory MPs and government ministers are incapable of getting their facts and figures right, how is the rest of us supposed to know what is going on? Or have the Tories decided to come out and intentionally baffle and confuse in order to confound the public to try and limit the damage of bad publicity?

Also if the government doesn't understand why it is having difficulty getting sick and disabled people from the ESA group back to work successfully, then it will not understand other less complex issues and the whole policy will fail - badly.