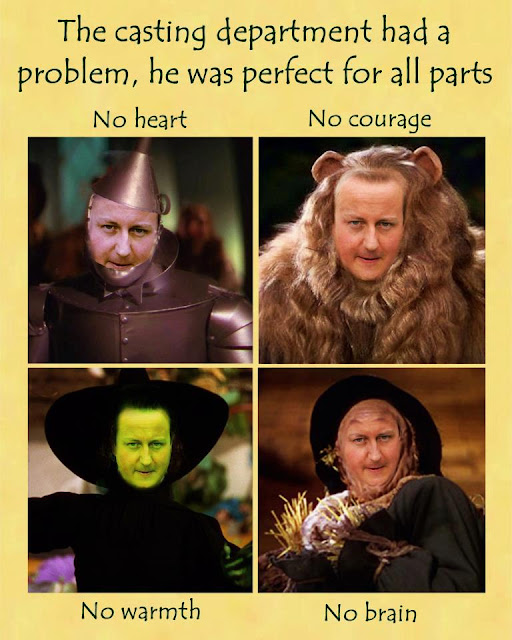 David Cameron and his faux moral outrage have managed to get the BBC Director General, George Entwistle's scalp. Of course Entwistle was helped on his way by Tory peer Lord Chris Patten, who along with David Cameron placed him into the post in the first place. (Anyone who doesn't believe Cameron had anything to do with this doesn't understand the situation.)

Following the controversy of the handling of the BBC and Jimmy Savile scandal, which did not happen under his watch, yet must have totally prevented him from doing his job, and the latest scandal to hit the BBC over their flagship programme Newsnight, George Entwistle, the new Director General of the BBC resigned late yesterday night.

Entwistle, who is rumoured to be the "son Chris Patten never had", must be pretty pissed at his "daddy" this morning. Perhaps he has now learned a severe lesson, *never trust a Tory politician*! They will do to you exactly what they what they need to do in order to save their own political necks. This is what just happened to Entwistle.

Personally I believe the Newsnight scandal was deliberately blown up completely out of proportion in order to make the Prime Minister, David Cameron look good. You could see him when doing his pieces to camera - lapping it all up!

Cameron is bombing in the polls and in some polls on personal rating Ed Miliband has overtaken Cameron, so Cameron is desperate to make himself look good. He can't do that by sacking his own errant ministers because he is far to weak a and too incompetent a prime minister to do all that, yet he can do it by giving Tory MP Nadine Dorries the sack for appearing in a TV reality programme, while failing to sack Jeremy Hunt who deliberately misled parliament and Andrew Mitchell who abused police protection officers in the street. Not forgetting the saga and scandal over Liam Fox, Peter Cruddas, Lady Warsi (and many others) and rewarding an ex minister David Laws with a job back into Government after he swindled £60,000 from the taxpayer on the pretext that he was gay and didn't want his family to find out!

So the "gift" of Newsnight and the half baked Philip Schofield so called "ambush" was manner from Heaven for Cameron, it allowed him to put on this overt display of "moral outrage" and completely hijack the very genuine and real concerns of Lord McAlpine for his own political ends. If Cameron thinks the public will fall for this then he is very much mistaken! Meanwhile while all this faux moral outrage with the hideous display of the equally false indignation put on by Cameron is diverting attention away from the real victims in all of this, those affected by the heinous abuse they suffered at the hands of a high profile paedophile ring operating in North Wales.

Cameron said that he does not want a witch hunt towards gay people! The fact that there was never one in the first place, doesn't seem to bother him, however, what a pity he could not show the same "moral outrage" towards his government and previous Tory government's shoddy treatment and witch hunt of those who have suffered hideously in all of this - the true victims of child abuse, those being incredibly strong and brave at the moment who are waiving their anonymity to try and make sure this doesn't happen to others.

What a pity Cameron cannot show the same indignation and moral outrage towards his government's witch hunt that his own Pensions Secretary, Iain Duncan-Smith is coordinating against the disabled in this country.

Pity he didn't show his "moral outrage" at the Daily Express headline last week that tried to start a witch hunt aimed at those families genuinely claiming benefits, it was *SHODDY JOURNALISM* so where is the Tory controlled government's "moral outrage" over this? Or is it because this is a witch hunt designed in 10 Downing Street?

This is what Prime Minister, David Cameron and his pal Tory peer Lord Chris Patten are doing each and everytime they try and divert attention away from themselves. Cameron parachuted Patten into his position of BBC Trust Chairman and in turn they parachuted George Entwistle in to be what they thought would be another safe pair of Tory hands. Now their slowly slowly catchee monkey politicisation of the BBC is being exposed for what it is.

The acting Director General is a Tim Davies, Chief Executive of BBC Worldwide and former senior marketer at PepsiCo.
When Andrew Lansley was Health Secretary, he courted publicity by putting fast food companies and drinks companies at the centre of writing government policy on obesity, alcohol and diet related disease, said by campaign groups to be the equivalent asking the tobacco industry to write the government's smoking policy, one of those companies was PepsiCo.

It seems that no matter what this Tory controlled government does, or who it appoints, it cannot keep its tentacles out of the sleaze.

Let's see which closet Tory Cameron and Patten can find to be the next Director General of the BBC. They should remember however, that this mess is the kind of mess you get when you try to politicise an institution like the BBC and if this is the kind of mess we have to look forward to as the Conservatives politicise the police service in the form of elected police commissioners, and privatise our NHS and privatise our armed forces -  then God help us!