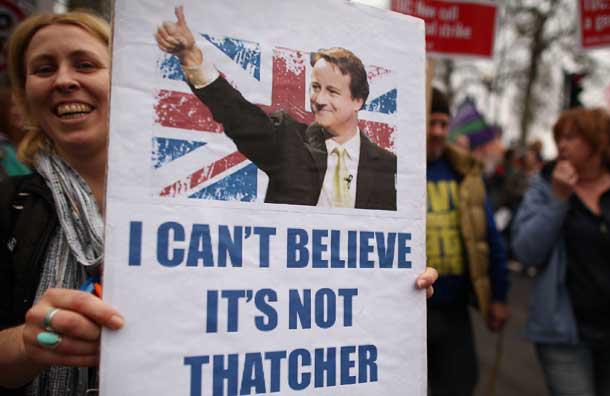 Speaking to the The Sun newspaper on the 7th October 2012 prior to the Conservative party conference, Prime Minister, David Cameron said:

The day before on the 6th October the Chancellor, George [Gidiot] Osborne told the Mail On Sunday:


I wonder if the PM and the Chancellor can explain why they are leveraging new council tax bills on the poor and the low paid, despite their pledges in the Tory press and the Tory party conference to freeze council tax?

Millions of low income families will be sent bills for money they simply do not have and have no realistic way of getting.

This is exactly the same as happened under Margaret Thatcher's poll tax, it sparked riots then and it will spark riots now.

Under the much maligned and hated poll tax, thousands of couples were billed individually for poll tax which saw the money they were previously paying out for "General Rates" almost double in one fell swoop. The unemployed and unemployed youngsters were sent poll tax bills and asked to pay with money they did not have.
Thousands of people were sent court summonses and prosecuted for money they did not have and many were sent to prison, while others were given suspended prison sentences for non payment of poll tax. Thousands of innocent people ended up with county court judgements against their names which ruined their credit rating, thousands more saw themselves declared bankrupt which went on to have a serious detrimental effect on their entire lives.
Now it's back, but in a different name and under a different guise, but make no mistake what the Tories are now doing is akin to the poll tax and will cause the same problems and disruptions.


Even those who now pay nothing will get annual bills averaging nearly £300. Some poorer people will be hit for double that.
Up to 3.7million under-65s - 1.1million of them single mums - will lose their council tax benefit.

In yesterday's blog I pointed out that in 2013 the government will be introducing their new flagship welfare policy "Universal credit". In effect, thousands of low paid workers who cannot find more than 16 hours part-time work per week will be faced with having their 'working tax credits' either stopped or cut. If these people are going to be sent council tax bills of between £300 - £600, how are they going to find that money when their tax credits have already been cut? This is a double whammy. Add to this the spiralling cost of utility bills and fuel at the pumps, how are these peoples supposed to live and feed and clothe themselves and   their families and get themselves back and forward to their low paid jobs?

As with the poll tax, local authorities fear that over half the people billed will be unable to pay up, this will leave them with a short fall in their budgets and on top of that will be heaped the colossal administration costs of firstly implementing the payments and working out who is to pay and who isn't; chasing payments and on top of all of that local authorities will be forced to use expensive bailiffs services and the courts, placing yet more burden on an already over burdened legal system, and councils will once again be accused of making criminals out of innocent people. During and after the poll tax years it took years for local authorities to recoup their costs and the majority never did, it will be exactly that same with this new system.

These changes being introduced by Cameron, Osborne and Eric Pickles will come into effect on April 6th, exactly the same day as Cameron's and Osborne's tax cuts for 8,000 millionaires is introduced, which will see them gain at least another £40,000 per year each. Prime Minister David Cameron, and Chancellor George Osborne will benefit from their own tax cuts and be at least £40,000 per year richer.

Cameron and Osborne have pledged to help who Ed Miliband has dubbed the "squeezed middle" and the higher earners, unfortunately low paid workers, the poor and vulnerable will be forced to pay for the middle classes tax cuts through cuts to their benefits and working tax credits. I hope that when their council tax bill is frozen, or when they go to fork out for their season rail ticket (that has been panic capped by the Conservatives), that they do not feel too bad about knowing that the money has been taken from those with nothing and next to nothing to pay for it. I know that for many this will be an upsetting experience, but it is all part of Cameron's class war on the unemployed, the low paid and those unfortunate enough to be sick or disabled, single parents and the genuine majority who are forced to claim benefits. David Cameron has been using divide and rule and driving a wedge between people ever since he assumed power. He has set worker against unemployed; able bodied against disabled; couples against single parents; the British against immigrants. What he is doing is not only wrong and immoral, it is highly dangerous, he is igniting a touch paper standing back and watching it all go up, soon he will get very badly burned, it's just a matter of time, all people that play with fire do get burned eventually, but we will *all* pay for the social unrest he is instigating in order to get himself re-elected.

As is normal for this government they are waging a vendetta against the poor, the hardest hit, the disabled and the unemployed and forcing them to pay for what the Tory doning City bankers and shadow bankers did to this country and the global economy.

The British government is picking upon those least able to fight back and what is more, they are inviting you to turn vicious bully and do the same. "All bullying together".

Bit by bit, day by day and week by week, the over privileged, out of their depth, incompetent David Cameron, George Osborne and Nick Clegg are taking this country back to some of its darkest days in history. Many like me will remember with fear and dread those days of hardship, financial ruin and an almost decimated education system and a destroyed NHS and streets full of starving homeless people. Many more will not remember because they are too young, now the time I hoped would never, ever happen again is happening and it's worse than ever. Many of us older people tried to warn the younger generations what would happen if we elected another Conservative government they didn't listen and now they are learning for themselves:


The Tories cannot be trusted with your lives or the lives of your family
God Help Us!!

Yes but the poor the sick the disabled would have to pay the same under Labour, I'm sick to death of being called work shy and a scrounger which was labours rhetoric, now we have a Labour list of what they would do, 100,000 new houses, but not social houses, 5p put back onto the rich, my god that will kill them.

benefits reduced by labour, new labour not dead it's camouflaged.

When did Labour say that Robert? Truth is they didn't. You know what I'm sick of? People like you that bleat on about Labour while they allow this evil government to get away with out and out attacks on the poor, sick and disabled. Labour were not and never were the enemy but this government is and rather than live in the past, I am more interested in trying to get this lot out, so we can save a lot of people so much distress. Labour never enacted Atos in the same way this government is doing and I know from 1st hand experience. I disagree with Atos, I want it gone and I will keep working towards that end, but I'll do it without attacking the one party that stands any chance of helping.