Who is Prime Minister Questions For? 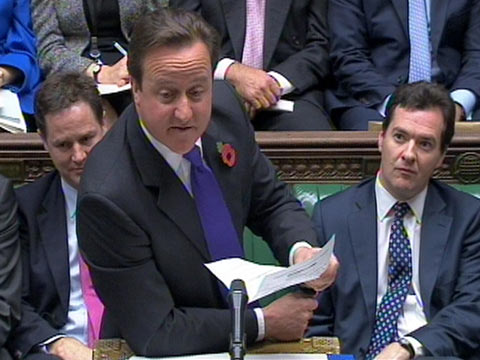 Who is Prime Minister's Questions (PMQs) for exactly? Is it for MPs and the opposition to table questions to the Prime Minister? Or is it for the PM to ask others questions and for him to give answers to questions he hasn't been asked?

I've watched PMQs since it first began to be televised and it's true to say all PMs avoid answering some questions however, without a shadow of a doubt, this PM, David Cameron takes not answering questions to another level. He never answered a single question today, not one, but gave us a string of answers to question he had not been asked. Perhaps it's time for Mr Speaker to inform Cameron in no uncertain terms that the weekly  half hour slot is not there for him to turn into a party political broadcast on behalf of himself. This is an abuse of his power and it should be stopped.

Another abuse of power today was the Prime Minister, David Cameron hinting at tomorrow's GDP figures, this is not only an abuse of power, it is against the law!

I am now wondering if tomorrow's GDP figures are not as good as he and Osborne had hoped, so Cameron purposefully mentioned them today in order to get some good coverage before it goes pear shaped tomorrow? Call me cynical and you would probably be right, however, can you blame me? I along with many others have learned that nothing the Prime Minister says can be trusted to be the truth, David Cameron cannot be trusted at all.

Cameron said last week in the House that he would force utility companies to put people on the lowest tariff and would legislate for it if necessary, this lie had fallen apart before he had even left the debating chamber and the government have been in a spin all week trying to get out of it. He misrepresented Miliband when his own Tory briefing told him that dual fuel bills were brought down under Labour and when Ed Miliband became Energy Secretary average dual fuel bills was £1,215 and when Ed left he had helped bring them down to £1,105.
Perhaps Cameron should stop lying, stop misleading and look into Ed Miliband's policy proposal of scrapping Ofgem and replacing it with a body which can actually help the consumer, rather than making stupid policy on the hoof which instantly falls apart and now no one knows what the government's energy policy is, it's a total farce and yet another omnishambles! I'm glad the PM can think it a joking matter that utility bills are now so high in this country that many people are being forced between heating their homes or eating proper meals. The cost of utility bills is extremely important to people and Cameron's response is nothing short of scandalous!

Conservative MP, Bob Stewart asked Cameron: "if he will ensure that the full panoply of government powers will be used to investigate "*MR* Jimmy Savile".

Cameron says; the allegations about Savile are shocking. The key question is, how was he allowed to get away with this for so long. The police will have adequate resources. And Cameron says he can announce that the CPS will review its decision not to prosecute in earlier cases.

This is all very well, but this matter has now gone far beyond this. It is now obvious that the BBC investigating themselves over alleged cover-ups which cover up other cover ups, is just plain ridiculous. Ed Miliband was correct at the beginning of this dreadful Savile exposure business, the wrongdoing as reached the NHS, the Ministry of Justice and the BBC, we need just one full public judge led independent inquiry to to unravel this properly. If Cameron keeps refusing to hold one then when all this comes out into the open (and it will) once again he is going to be left looking shifty and dodgy as if he has something to hide.

It would be a breach of parliamentary language for Miliband to state that Cameron is lying during PMQs, and yet Cameron's schtick is to continually lie and/or not answer the question. He's a disgrace to his office.

But now even right-wing commentators such as Fraser Nelson and Paul Waugh concede that Miliband is consistently getting the better of Cameron. And they're part of the commentariat who all wrote Ed off not so long ago.

What also gets my goat about Cameron's PMQs performance is that he refuses to make eye contact with Miliband when he (Ed) is speaking, instead he sits there pretending to be engrossed in his papers. Perhaps Ed should comment on the way Cameron appears afraid to make eye contact - it would certainly bring on an attack of the 'crimson tide'. It certainly looks like an abnormal and discourteous way for a PM to behave.

Interesting article in the Huffington Post, by a Conservative supporter, who at least has had the decency to admit that the 'Labour's mess' story is a pack of lies. Well, we knew that all along, but it's refreshing to get some honesty from a Tory for a change. He admits the strategy has been self-defeating because it's killed off consumer confidence and growth.

Hi Nicky thanks for the link, I read his other two pieces and they were excellent, if all Tories were like him we would all be in a better place now!

You are right about Cameron not holding eye contact with Ed Miliband, I've noticed this, maybe we should raise it on twitter, in fact I will!

I know that would go against Margaret Thatcher's free market ideals. It would be good for consumers though, but you are right he wont do it, he hasn't got the spine! meanwhile the poor, disabled, vulnerable etc will go on being punished and penalised by this government and be forced to pay for what the bankers did, it's a disgrace!