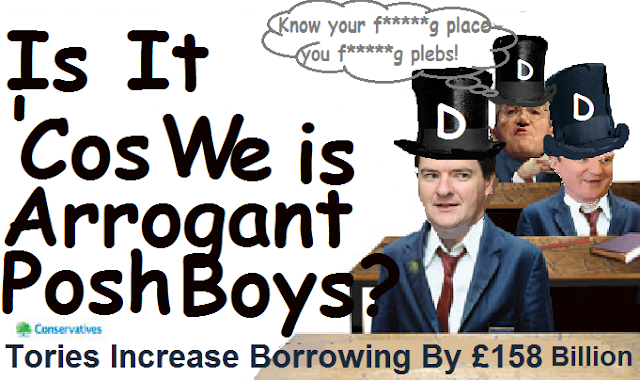 The Tory party have closed ranks and commenced "Operation Save Andrew" the embattled Chief Whip who screamed abuse at protection police officers at the gates of Downing Street; "Know your fucking place" and "fucking plebs".
This latest saga came after Andrew Mitchell held talks with West Mercia Police Federation in his Sutton Coldfield constituency. Police feel that Mitchell has no option but to resign and if he will not resign then the PM, David Cameron should sack him. However David Cameron has refused to do so.

At least we now know exactly what all Tories think of us as they close ranks to protect one of their own, we are all "fucking plebs" who should "know our place", what next? Tugging forelocks?

If any of us "plebs" had screamed abuse and profanities at police in the street as Mitchell has done then we would have been arrested and probably charged, why wasn't Mitchell?

The Tories would like to draw a line under this, I bet they would, it's highly damaging for a political party to make known they believe the majority of the electorate are "fucking plebs".

Sorry to disappoint them but this story is far from over and neither does it take into consideration the "dodgy deals" of Andrew Mitchell just as he left his last department "Overseas Aid".

.Britain had initially agreed to suspend £16 million of aid to the east African country, in accordance with international condemnation of the regime.

Rwanda's president, Paul Kagame, is said to have shared responsibility for a bloody uprising in neighbouring Congo, although he has denied any involvement, and there are also concerns over his country's human rights record.

But Mr Mitchell's last act as International Development Secretary, before he was moved to the role of Chief Whip in the recent Cabinet reshuffle, was to restore £8m in aid to Rwanda. A further £8m was redirected to education and food security programmes.

Another £21m was set to follow later this year, apparently against the advice of officials in his department and the Foreign Office. Independent

Once again we see the Prime Minister;s judgement called into question, he should have sacked Mitchell immediately regardless of whether he used the word "pleb" or not. How is is deemed appropriate for a senior member of Cameron's government to be allowed to get away with this kind of behaviour? What does a minister have to do in Cameron's government to get the sack?


Apparently in private cabinet ministers are urging David Cameron to sack Mitchell, the fact that he refuses to is showing contempt for the public and it also shows how seriously devoid of any kind of lucid judgement the prime minister is!

This is no longer a row about who said what, this has now transgressed into a a show of complete contempt for the public from the arrogance of the rich who believe they can do and say what they want to us because they are better than us and this is something that David Cameron obviously feels himself.