Has Nick Clegg Lost The Plot? 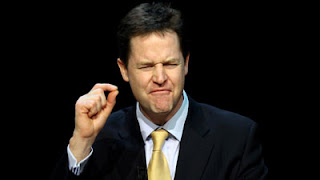 The country is in the grips of a double dip recession, which "friends of the Tory party" ensure us is just  "technical". (One wonders if they would be saying this if we still had a Labour government?)  The UK's economy is on its knees.

The Tories aided and abetted by the Liberal Democrats have forced the biggest reform of the NHS though against the majority will of the people, which will lead to NHS privatisation and hospitals for the poor which will only offer the most basic of treatments. NHS waiting times will increase (already started). Many patients with more than one need like the disabled, elderly or chronically sick, will find themselves without a GP. People will be forced to buy expensive health care and even if they can afford that, it will not cover them for everything.

Michael Gove the Education Secretary is intent on taking this country's education back to the two tier system of the 1950's - 60s and 70's, where able children were denied taking 'O'-levels, instead forced to take CSEs and job adverts always advertised for applicants educated to 'O'level standard, hardly ever CSE.  This is quite apart from the fact that Gove has allowed "free" schools to take the place of fee paying schools with the taxpayer picking up the tab for well off parents to educate their children privately.

It appears not to matter that the health secretary, Andrew Lansley is allowing vendors with their junk food machines to enter schools


Unemployment is bumping along the bottom showing absolutely no signs of picking up, there was a miserly fall of 51,000 last week mainly entirely due to the fact that people are being forced to work part time jobs because there are no full time positions. The private sector is only making part time jobs and it is these statistics the government is using to try and tell us all the private sector is making jobs faster than the government is shedding full time jobs. In truth *BOTH* the private and the public sector (and all taxpayers) are being forced to bankroll the payrolls of multinational corporations like McDonalds, Tesco's etc., many of whom donate privately to the Conservative party, in return for getting free labour or cheap labour from the government.

The welfare reforms are rendering disabled people terrified in their own homes in fear of what this government that Nick Clegg is part of, will do to them next by taking their livelihoods, their cars and their wheelchairs away and forcing them to work for nothing in fear of losing their benefits, this alarmingly also applies to those people who have been diagnosed with a terminal illness considered to have longer than 6 months to live.

This government that Nick Clegg and his band of idiot Tory brown noser MPs  belong to and back on a daily basis and who are treating the electorate with utter contempt and in an alarming ever growing number of cases ( see Jubilee slaves)  are treating people like some kind of "indentured bondservants", being hawked to Tory supporting corporations in return for votes, support and Tory party donations.

Virtually every single policy this government try to bring out lands up in a crumpled heap having crashed head on into the first available brick wall.

The government's budgets are a complete joke a panel of 4th formers could probably do better.

The Conservative government is beset with allegations of corruption eg: Peter Cruddas and "£250,000 cash for access to Cameron" and "cash for access to policy  making".  Cash for access to lunches with Cameron charged at up £100,000 which were being held in the Commons until the Parliamentary standards Commissioner ordered the Tories to stop and all the rest of it (see the remainder of this site, plenty of details included)

Cameron the British prime Minister has taken to making personal attacks on people over tax payments (or lack of them), while completely omitting to mention that his own family, friends and Tory donors all partake in a little tax avoidance. He attacks Jimmy Carr, while leaving his old mate and Tory supporter Gary Barlow out of it, yet Barlow has been doing much the same. Cameron did not personally attack Barlow, instead he gave him an OBE.

In just two years this government appear to be not only the most corrupt, but the most sleaziest in living memory of this country and David Cameron has proved himself to be the most incompetent lying PM ever.

The entire government is a farcical joke made up of the most deceitful egregious lying hypocritical Gobs on sticks.
All of this (and so, so, so much more) and what is bothering Nick Clegg the most? House of Lords Reform! You can't make it up really can you?

It is estimated that the cost of House of Lords reforms will be around £500 million, add to this the £100 million that nick Clegg has already spent on his AV referendum . £600 million could help the victims of domestic violence who are losing centres directly because of government cuts, or it could keep many Sure Start centres affected by government cuts open too. I have to ask, just how many more of Nick Clegg's vanity projects can this country afford?


I don't think that Nick Clegg is losing the plot, I think he has already lost it  - Long Ago! (Probably at the meeting well BEFORE the May 2010 election), when he pledged the support of the Liberal Democrat party to this bunch of right win lying fascist Tories, that we now have for a government.

Great post!This blog is a great source of information which is very useful for me.Thanks for showing up such fabulous information.
regards
South Florida Vending Machines Services

People will be forced to buy expensive health care and even if they can afford that, it will not cover them for everything. thanks for it.