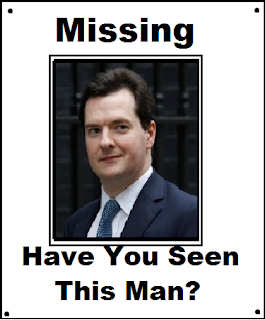 Let's face it 0.2% "growth is not growth at all, in real terms this figure is probably masking a small contraction.
Yesterday we were treated to a whole plethora of excuses from the Office National Statistics (ONS) and George Osborne himself. I was absolutely astonished at the patheticness of the excuses, it wasn't the Conservative chancellor's fault, said the ONS it was erm *the royal wedding - *The extended May Bank Holiday - * The wrong kind of Spring weather - * Unseasonal fall in oil production - * The Japanese tsunami and nuclear incident - FGS this from the people in charge of our economy? Not forgetting that later George Gideon Osborne took to the airwaves to tell us all how wonderful 0.2% "growth" really is and how the UK is a wonderful beacon of stability in a global storm (apparently).

Just a minute wasn't it Cameron that informed us all of how wonderful the royal wedding was going to be for the country and how manufacturing was going to benefit from the making of memorabilia etc, and it would have been too if only that pesky sun had not got in the way. (I do mean the sun as in sunshine and not the Sun as in that other Tory story that will not go away). So let's get this straight, when people questioned how much the royal wedding was going to cost us they were told that the millions spent on security for the couple would all be recouped out of the revenue raised for the economy by the event itself - so what happened then?  The royal wedding was trumpeted as a boost for the economy now its blamed as one of the causes for poor performance. Which is it they cannot have it both ways!

Why is this being used as an excuse? Is it because the government does not want us to remove the royal wedding revenue factor from the figures because if we did this then suddenly we see that the service sector is really not doing that well and that it was only the service sector that stopped the figures going into negative territory, so far better to blame the wedding for the poor performance?

Also another little mentioned fact, apparently the financial sector has once again started to recover - why? It isn't for the loans they are giving out to hard pressed struggling businesses is it? Perhaps it could be that as Osborne's austerity measures bite, the income that families have to manage on has fallen dramatically with wage freezes, VAT increases, fuel increases, food increases, utility increases etc that families incomes have dropped so much and they simply cannot manage so they are being forced to borrow on credit cards just to get by? In fact, as a direct consequence of George Osborne families are being forced to borrow a further 14% just to survive and who is the recipient of over priced credit card transactions? Well of course it is the people that caused the problem in the first place the greedy bankers! So their sector is recovering by George Osborne first of all forcing everyone to pay for the bankers greed and then forcing them to pay for the recovery by being forced to borrow yet more money simply to exist. It is pure madness! But don't worry because while we are all being forced to do this by George Osborne the bankers income and profits will go up so "bless 'em" they will still get their golden hellos, their golden goodbyes, their golden pensions and of course their solid gold bonuses.

The income gap between rich and poor is increasing daily and George Osborne's proposals? Is to cut tax for the rich and lower corporation tax and who will this benefit? Oh and apparently they are going to have some scheme for fibre optic cables, but hang on, that scheme is already in operation and has been for the last 4 years and meanwhile Vince Cable is prattling on about forcing the banks to loan to small businesses ( yawwwn again) this is all very well but can Vince Cable please explain what Osborne's "Project Merlin" was supposed to be all about? What has happened to project Merlin by the way? Osborne doesn't even mention it these days.

This Tory government (for that is exactly what it is)  assumed power claiming the country is bankrupt and has no money to pay welfare to terminal cancer patients, or payments to disabled people, or fuel allowances to pensioners and. yet suddenly finds the cash to bomb and bankroll the so-called Libyan rebels. They have cut Sure Start centres, libraries, the police and defence, they are cutting the number of training places for doctors and nurses, despite david Cameron bizarrely claiming in the House of Commons that since the Tories came to power the number of doctors has increased! Unless doctors training now takes place inside one year, I honestly fail to see how he can claim that, once again he is taking us for idiots and misleading parliament and the British people.
The truth is that Osborne's austerity measures are only just beginning, just starting to bite and if they are this bad so early on then what on earth is it going to be like another year or two down the line? There are still the hundreds of thousands more public sector workers waiting to lose their jobs, yet more money to be taken out of the economy as these people will not be spending and this is on top of the further £13 billion yet to be taken out of the economy this year alone.

Unemployment will start to rise, the only reason it hasn't now is because of the disproportionate number of part time jobs that people are being forced to take. I would not be surprised to learn that Osborne has asked companies to offer more in the way of part-time positions so the unemployed figure will not keep rising. There is  definitely some kind of discrepancy occurring there. Why is there suddenly a glut of part-time positions being made and fewer full-time positions? This is the reason why the number of those claiming benefits is now soaring, this is because people are being forced to claim top-up benefits because they cannot manage on part-time wages and this in turn means we are heavily subsidising big companies wage bills as it is cheaper for them to hire part-time workers than full-time and is probably the reason why there is suddenly a surge in the number of part-time positions being made.

All this and the chancellor is blaming external influences, by that he means he is blaming other countries and that really is a big joke! When in opposition Cameron and Osborne insisted that the recession was all Brown's fault brought on by his spending, now they are in government they seem to think they can blame the state of the world's economies for their abysmal stifled UK growth, but they cannot, they simply cannot have it both ways. Fact is that despite all the problems with other countries economies in Greece, Portugal and Spain etc and despite coming out of the steepest recession fro a 100 years Labour still managed to return the country to growth and achieve falling unemployment and because of growth of 1.1% they were able to reduce government borrowing by a huge £43 billion, the Tories were handed an economy in recovery and what have they done with it?

So you can see that ever since the Tories have been in power they have managed to put growth on a downward spiral proving that the Tories have actually managed to slow our economy and because the chancellor and Cameron are in denial and because they have absolutely no idea what to do, this trend looks set to continue and I estimate by next year unless these idiots are booted out of office, then this country will be back in recession.

The chancellor emerged briefly yesterday to deny his measures are actually harming the British economy before retreating into hiding again (so he couldn't be questioned over his many visits to the Murdochs). I fear this is probably the last we will see of him over the summer recess, he has probably gone on another holiday like the prime minister has, Cameron is due to go on his 3rd foreign holiday of the year. Alright for some I suppose! Still they had better take all the freebie holidays while they can, I have a sneaking suspicion they will not be in power much longer!
Posted by Gracie Samuels at 6:02:00 PM