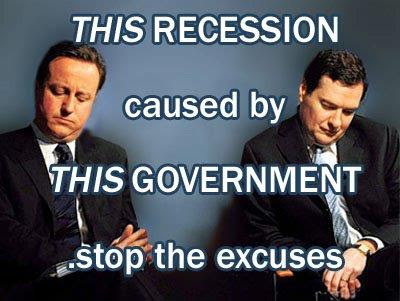 It's now patently obvious to all (except George Osborne) that his plan A has failed, and we are all staring down the barrel of a gun and unless Osborne changes tack and fast, we are all going to hell in a hand cart!

George Osborne's Christmas gift to the unemployed is rumoured to be a freeze or cut their Job Seekers Allowance (JSA). Apparently the chancellor is going to treat the unemployed like "cattle" and give them the "prod" they need to get them into work.

It may have escaped Osborne's notice that thanks to his insane austerity measures there is precious little work around for the unemployed to be "prodded" into! Ever since he set himself on course to destroy over a million public sector workers jobs and the temporary work created by the Olympics is fading fast, the only jobs that seem to be made in the private sector are part-time jobs. We know that George Osborne is a part-time chancellor himself (and an exceptionally well paid one), so this may come as a shock to him, but most people want to work full-time and do not require his condescending "prodding" to try and find work. The unemployed, are actually people, they are not animals to be prodded about about an over privileged, over bearing, out of touch millionaire Tory chancellor, who wouldn't know what it is like to subsist on state benefits, the total amount of benefit paid wouldn't keep Osborne in wine and champagne for a week!

Thanks to Osborne's anomaly making it cheaper for Tory doning company bosses to hire two part-time workers instead of one full-time, and also thanks to the Tories trashing workers rights in the work place, there is mainly only part-time work available as greedy company bosses slurp up and exploit the situation and exploit the position part-time employees find themselves in. No doubt the Treasury takes the view half a job is better than none, but it really isn't, not if you have a family to feed and support. Thanks to the Tory controlled coalition government and Osborne's total denial of the dire situation this government have actually caused. Falling living standards and the cost of living soaring, how are people supposed to manage on part-time pay? To add to the misery, Osborne's mate at the DWP, Iain Duncan Smith is going to cut even more money from people on working tax credits, if they do not increase their hours, never mind if they can increase their hours or no/, their money will be docked and this is due to commence in April 2013 and a whole load of people do not realise what is about to hit them.

Never mind constantly attacking those on low wages or seeking employment and trying to drive a wedge between people, the government should turn their attention to profitable companies who are guilty of exploiting their workforce and the taxpayers of this country, and they should be named and shamed and mentioned on every single news bullet-in until they stop it and pay their workers a decent living wage. Strange how the Mail, the Sun etc are so quick to bash the jobless and label them as "feckless scroungers, living it up off the state", or attack disabled people and infer they are all "malingering frauds", but never mention how Tory supporting, Tory doning firms are exploiting the system and forcing the taxpayer to pay a large part of their payrolls - not a dick bird!

When next some are about to fall into the Tory trap of attacking the "feckless" low paid and jobless and blaming them for all the ills in society and the world, perhaps they should save their criticisms for the Tory doning company bosses who are being given free full-time labour from the jobless queue and carte blanche to pay low wages and encouraged to hire part-time staff and all at the taxpayers expense.

This country faces serious financial hardship and many people are going to go under, the Bank of England has already predicted that the economy could shrink for the third time forcing the country into a triple dip recession. Osborne claims it would be a disaster if we about turned on his austerity measures, but if we don't it will be a catastrophe for this country. Many people are already hanging on by a thread, any further hardships announced by the chancellor tomorrow will see them lose their grip, it will be a financial Armageddon. All this is not to get us out of debt, we are not broke, this country is rich, all this suffering is purely for Tory ideological reasons and is finishing what Margaret Thatcher started. Only Thatcher was wrong back then, which is why the Tories jettisoned her and her policies are wrong now, they are bringing the country to its knees.

If the chancellor will not listen, if this totally incompetent reckless government refuse to stop this and insist on going still further, then it really is time for the British people to stop them. The time has come to "rise-up" and say: NO enough is enough and no more" and force a general election. There is precious little confidence in this government, only by a few die hard Tories and Liberal Democrat nincompoops.

Do we really want to wait before we act to see thousands of people living rough on our streets? Wait until we witness the harrowing scenes of children being ripped from their parents sides and arms because their parents have lost their home through the government insane rent cap, forcing people to pay for the greed of landlords? Repossessions are starting to rise, more families are losing everything, they are in the pits of despair, they are not idle feckless, they are people struggling to exist after losing their jobs, or struggling on low pay. Bankruptcies rising, redundancies rising, look at the state of the High Street next time you are there.

The damage that Osborne has already caused the economy is frightening and in his autumn statement tomorrow it is already clear he is about to cause more, the trouble is, how much more damage can the economy sustain before it actually implodes?

Tomorrow will be a grim day if you're not a millionaire.

There must be a way to get these B'Stards out of office.

Wants to starve the jobless.

What Osborne and Cameron want people to believe is that all people on benefits are scroungers who don't want to work, when in fact most are working in low paid jobs and they are going to be hit dreadfully by today's announcements.

This year I've got an unusual request for my Christmas present. What I'd like this year is, I would like you to get your reindeer to bite David Cameron, Gideon Osborne, Iain Duncan Smith, Chris Grayling, Theresa May, Maria Miller, Sayeeda Warsi, Kwasi Kwarteng, Priti Patel, Dominic Raab, Chris Skidmore and Elizabeth Truss rip them to shreds, trample them underfoot and then leave them naked in the snow without any supplies in the middle of the North Pole. :)

Thanks in advance and Merry Xmas. :)

They should stop the SANCTION CENTRES from sanctioning claimants, who in Gods name thought up such a monsterious idea.
It is nothing more than POLITICS OF HATE, 3 months, 6 months and 3 years on SANCTIONS; people need to beware that those SANCTIONED have proved they are looking for work but it is all about bullying and taking money from the most needy and in order to this THE POLITICS OF LIES are then spread that all unemployed are workshy or scroungers.
The SANCTION CENTRE have told claimants that if they don't join their up graded website their benefits will be stopped even if they can prove they are looking for work, the SANCTION CENTRES own leaflets states that 'If you don't join you won't be able to apply for any jobs on their website' in no way did it ever state you have too.
So the SANCTION CENTRE are being allowed to bully, threaten and whatever they like without anyone pulling them up, a disgrace to say the least.