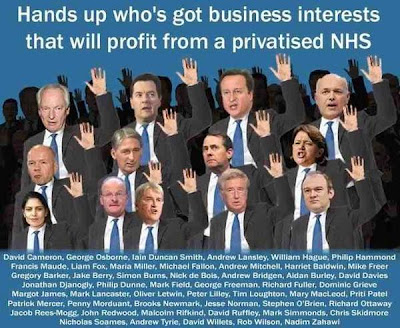 Do these thousands of staff feature in the Government's and Office National Statistics claims that a record number of private sector jobs have been created to take the place of a fall in public sector jobs?

Remember this report from the Telegraph about Virgin care takeover of NHS healthcare on the very day the queen gave royal assent?


Even the doctors and nurses who work in Surrey’s hospitals and healthcare centres taken over by Virgin Care are no longer employed by the NHS and instead have had to become corporate lackeys. They had no choice: a Virgin Care spokesman confirmed to me that if they didn’t want to work for the company when it took over services from the NHS, their only option was to resign. The Telegraph - Healthy Competition in the NHS Is A Sick Joke

The government are lying to us and they are manipulating and massaging the unemployment statistics. What a mess this Tory controlled government are making of this country, it's horrendous.

When is this government going to STOP deliberately misleading the public?
Posted by Gracie Samuels at 1:11:00 AM

There are members of this government who will have known about, and even colluded in the murder of Mr Finucane in 1989.

This is the third time this government has had to apologise for corruption that went on in a huge way under the previous Tory administrations, it makes you wonder what they are keeping from us now.

Look at what is happening in Leicester Hospital (and other hospitals too no doubt), yet we cannot get any of the press to run the story, I have run it here, but I get so frustrated, we have whistleblowers now in the police, the NHS, welfare, defence, what damage these blithering idiot Tory buffoons are doing is incalculable and yet still their mates in the right wing press ignore it all - Why? I can only surmise that it's because they do not want this government to put state regulation to control the press. If the press publish anything they now think the government will turn around and regulate them.

All this under a Tory government? It's a joke, only no one is laughing and if people knew the true extent of the damage this ludicrous bunch of over privileged turds are doing they would not only be horrified, they would be petrified!