David Cameron: Out of Touch and Out of Control In furious Exchanges 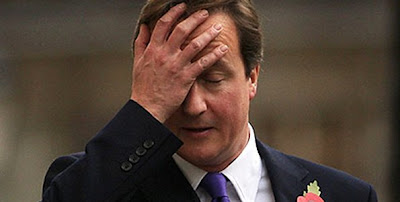 The last Prime Minister's Questions (PMQs) today before the House rises for the summer recess was a resounding victory for the ever growing in confidence leader of the opposition Ed Miliband and once again he managed to make David Cameron look tired, out of touch and out of his depth.

David Cameron, on the back foot and panicking, resurrected the "red Ed" tag, although why he chose to do so is a mystery, it didn't work the first time when Ed first became leader of the Labour party and Cameron has failed to make it stick all the other times the he has tried to launch it. It was clear from the PM's performance that he was desperately trying to give the Sunday newspapers a soundbite. However, the only thing reddish about Ed Miliband happened to be the reflection of David Cameron's ever rising crimson tide from across the dispatch box. If Cameron's failed "red Ed" pun is the best he can come up with then he is in serious trouble! I wonder does he realise that Ladbrokes  are giving 3-1 on David Cameron being replaced as Tory leader before the next election?

Ed Miliband ribbed the PM over his lack of control over his party and for losing his temper and pointed to an incident that took place last evening with Jesse Norman Tory MP for Hereford and South Herefordshire  over the vote for Lords reform, which Cameron was forced to ditch for fear of plunging the Coalition into further bitter chaos.
Karl Turner Labour MP for Kingston Upon Hull told BBC Radio Five Live that he;


was leaving the division lobby in the House of Commons shortly after Tuesday's [10/07/2012] vote when he saw Mr Cameron make a "beeline" for Jesse Norman.

"The prime minister was red-faced and clearly very very angry.

"I was taken aback because you don't expect to see the PM doing that to a colleague: pointing and prodding towards him in a very, very aggressive manner," Mr Turner told BBC Radio 5 Live.

The 91 rebel Tory MPs who voted against the government have to admit they had to rely on Labour MPs votes to win, what a pity these Tory MPs couldn't do the same when it came to passing the Health and Social Care Reforms bill which will now lead to privatisation of the NHS. Of all the issues to get steamed up about, welfare cuts, the NHS, education, EMA, tuition fees and the Tories and the Liberal Democrats get all wound up over Lords reform, ("glad" to see they have their priorities "right"!)

This is not the first time that David Cameron has lost his temper this week. After last Wednesday's PMQs There were similar Parliament fisticuffs when Cameron and Miliband left the debating chamber.

Mr Cameron appeared to be angry that Mr Miliband had suggested a two-part inquiry into the Libor fiasco during Prime Minister’s Questions without having given him prior notice. Cameron attacked Ed Miliband  jabbing his finger and yelling:

‘You had no right to do that without telling me,’ he stormed. ‘

You ambushed me! Don’t do that again!’ Mr Miliband countered:

‘You have handled all this badly and Osborne has made false allegations against us.’

In today's PMQs when Cameron was asked by a back bench MP when he was going to apologise for his chancellor's accusations where he libelled Ed Balls the shadow chancellor in the Spectator magazine and again in the House, Mr Cameron flew off into yet another rage, ranting away and completely evading answering the question.

Another sure sign of the Tory led Government under increasing pressure and out of control is the question which was literally screamed out by Tory MP Anne Marie Morris.


The question was an obvious planted question concerning something about further education ( which this Tory government are wrecking as plummeting numbers on courses have shown), although quite what the point was no one seems to know, not only was she drowned out by shouting, it looks like someone cut her microphone! Also why on earth is she wearing a sling, doesn't look like there is much wrong with her arm the way she was flinging it around. (I hope she doesn't claim DLA if she does she can expect a call from Atos). I think Cameron should have saved his now infamous "calm down dear" quip for her, her actions were truly bizarre!

Tory MP Andrew Bridgen asked a partisan question about council tax, (desperately sucking up to Cameron after revolting last night in the Lords Reform vote) David Cameron always happy to obliged a crawler and indulge in a bit of Labour battering answered, "we back the workers, they back the shirkers". So we are legitimately entitled to ask if this reply was an admission that David Cameron and the Tory party and Lib Dems by default, judge all those people unfortunate enough to lose their jobs and are currently unemployed as "shirkers"? And that all those who vote Labour are "shirkers" too? Nice to know!

The bullying and a narcissistic temperament clearly displayed by Cameron in public is horrendous, what on earth is the man like behind the scenes?