Cameron's Can of EU Worms 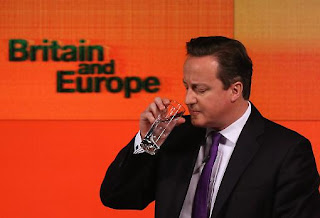 The prime minister's speech raises far more questions than it answers, in fact, his speech doesn't answer any questions at all.
Even *if* Cameron wins the next election and supposing he does keep his promise (this time) to give the public a referendum, it is reported that the referendum will not be held until around 2019, that will be approximately six and half years of uncertainty hanging over the UK putting off inward investors, thus having a detrimental affect on our jobs and growth.

Cameron said if he renegotiates the right terms for Britain in the UK he will campaign passionately to stay in the EU, so are we to assume that if his renegotiation strategy fails, he will campaign for the Britain to leave the EU? This is a very important question which he point blank refused to answer both after his speech and when Ed Miliband asked him today in PMQs in the House.

When the PM was asked by journalists what the terms of his renegotiation package will be he had no answers. This is not good enough, for the electorate to come to an informed decision we must be in possession of all the facts, you would have thought on the day in which he made such an important speech promising an in or out referendum, that he would have put some meat on the bones and been prepared with a few examples when asked this obvious question.

Why is Cameron so reluctant to say what form these supposed renegotiations will take and when he expects them to take place and seeing as he has already used the veto, who is he going to be negotiating with exactly? Don't forget he has already downgraded us from the top table and most of the countries that matter will not talk to us  because he used the veto! What is Cameron going to do if he doesn't get his own way, stamp his feet and walk out and come back to the UK and campaign for an exit to the EU? Or will he be thrown a few scraps and then return and over inflate what was offered misrepresent the detail (which he has done many times before) and recommend we stay in the EU? And what happens if the British public see through him and vote to exit? What happens to the millions of people whose jobs depend upon us being in the EU? It is not enough for him to say we can trade with the rest of the world, China, Japan and the US have already said they only trade with the UK because we are a member of the EU. Cameron is playing a very dangerous political game and is taking a terrible gamble with all our livelihoods and if he loses, the consequences for the country and the economy could be catastrophic.Some of the so-called negotiations cameron wants from the EU is the consent to treat British workers in any way he sees fit, to take away their working rights and to take away our human rights. make no mistake about it, David Cameron will be pursuing a harsh right wing agenda.

Cameron once looked NHS workers in the eye and blatantly lied to them when he said: "I promise under a Conservative government, there will be no more top down re-organisation of the NHS" shortly before sanctioning the biggest reforms in the NHS 63 year history. Remembering The PM's predisposition for u-turns (approximately 33 so far) and remembering his "cast iron guarantee" to give us all a referendum on the Lisbon Treaty before glibly reneging upon his promise, I would not be willing to bet and lose my money that he keeps this "promise" to hold this "in or out referendum" either!

Lets not kid ourselves,this speech wasn't about positioning Britain's interests in Europe, it was all about positioning his own party political  interests for re-election in 2015; re-election into a job he has proved without a shadow of a doubt he is both unfit and seriously unqualified to do and making this EU speech at this time just goes even further to prove this.

The only reason he is offering this referendum is because he is running scared from the right in his party and panicking about UKIP. Cameron is being driven by the fantasy EU ideology based on the fanatical right wing eurosceptics of the Conservation party and not by what is right and best for this country, he is placing his own narrow party politics interests ahead that of the financial security of the nation.

How can Nick Clegg, now carry on supporting and propping up a government and Tory party that is diametrically opposed to his own party's long held beliefs on Europe, especially when this is definitely going to affect jobs and growth? If he carries on propping this government up, then this will I believe be the last straw which broke the camel's back for the remaining few supporters of the Lib Dems.

David Cameron once went into the lobby with Ed Miliband to vote no for an in or out referendum on Europe, but that was before UKIP started to make advances into his party's support.

The bottom line of what Cameron has actually done today with his political opportunism  is to ignite the very real possibility of the UK leaving the EU and place millions of jobs at risk and all for the sake of his own narrow party political interests, it is an absolutely shameful way for a prime minister to behave and once again he has made us appear the laughing stock of Europe, who in their right mind can ever take this liar and deceiver, this misleader and purveyor of black propaganda and disinformation seriously? He says he wants the rest of the EU to work with him on h this - why? Why would they do that? It's not as if any of his policies have worked so far is it? This is the PM along with his chancellor who has given us a double dip recession and quite possibly a triple dip is on the cards. He has messed the British economy up so much that we are now borrowing far more than we were when Labour were in power at the height of the financial crisis. This is the PM and chancellor who took a a growing economy in recovery and decreasing borrowing and turned it into a double dip recession with contracting growth and now we are heading fro a triple dip recession and will almost certainly lose our AAA rating making our increasing borrowing more expensive, the more they cut, the more we m borrow and the more we contract and the more we will eventually pay for that borrowing.

If we are to have this referendum, surely we can expect more from a PM who told Ed Miliband to "go away and get a policy", when in fact Ed Miliband had given a straight answer to cameron's question which IS a policy, we do not want to hold an in or out referendum, I know Cameron doesn't do detail, however, you would t have thought that even he could have grasped this!


Today we saw something very loud and very clear in the House of Commons, we saw a weak and panicking prime minister so desperate to cling onto power, so desperate to get re-elected, so desperate to win over the right wing loonies in his own party, sell this country and her people down the river for his own party political reasons, in direct contrast we saw the leader of the opposition, Ed Miliband, say that he did not want an in or out referendum. Now he isn't stupid, he knows what this could do to Labour's support, and he knows he has opened himself up to constant barracking from the right wing Tories and he knows this will be flung at him from the gutter right wing tabloids whose editors and foreign owners want to govern this country without standing for election, yet he still had the guts and the integrity to do what he believes is the right thing for the country, not for himself, not for the Labour party, but for the country, in short Ed Miliband has been true to his word, that he would always speak the truth and always act in what he sees as the right thing to do for the country first.

When the next election comes along, the choice will be clear,a vote for Cameron who is following his party, or a vote for Miliband who is leading his?

Cameron who is a proven liar, or Miliband who tells the truth no matter what the consequences?

A vote for Cameron and more of the austerity that has so badly damaged the country's economy, is a vote to damage the country still further.

What right has the PM to ask for votes from people when he has caused nothing but fear, distress, chaos and confusion to the disabled, the vulnerable, the terminally ill, forcing them to work for zero so he can falsely claim unemployment is falling? A person who is privatising the NHS by stealth and wants to use the EU to force NHS doctors to work all hours putting the public at risk?

David Cameron and the Tory controlled coalition government is seriously undermining this country and causing serious damage to the people, doing what he did today solely for his own political gain, is just another blatant abuse of his powers. In doing what he did today he has opened up a giant can of worms that will prove absolutely disastrous for this country, he did all the wrong things for all the wrong reasons.

David Cameron is not a statesman he is a scared and panicking conman!