Lunatics Have Taken Over The Guardian! 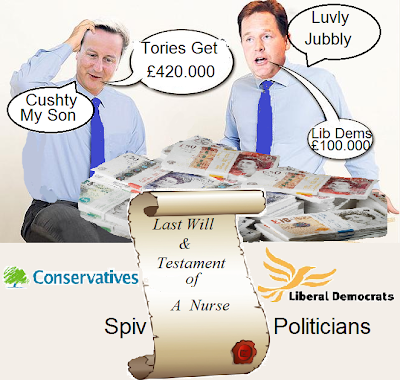 In the last couple of weeks when the Guardian newspaper has strangely allowed itself to become obsessed with bashing Ed Miliband and Labour, sometimes publishing several different online "EB" stories per day, (quite often variations of the exact same story) they took their eye off of ball. So caught up in their bizarre Ed Miliband bashing obsession were they, that they missed a true political hot potato! One of those kind of stories that stick in the voters minds as well as their craws.

Obviously the Guardian thought it more important to try and break down Labour's poll lead by using a string of unsubstantiated fatuous stories from a never ending stream of has beens and never heard ofs in order that the Liberal Democrats could help form another coalition government with the Tories after the next general election than be bothered publishing proper news stories. Thus far they haven't managed to raise the Liberal Democrats polling by one iota, all they have succeeded in doing is making this once great newspaper look infantile and petty no doubt managing to lose a few more readers in the process. Still never mind, judging by the quality of below the line comments it looks as if they may have succeeded in picking up a few former Sun readers who find themselves at a loose end since their favourite newspaper went behind a paywall!

Through clenched teeth I have to say that the Daily Mail breaking the story about the former midwife Joan Edward's bequest being misappropriated by the Conservative party and the Liberal Democrat party was tip top investigative journalism, but credit where it's due I suppose. If the Guardian, once noted for its own excellent investigative journalism, had not taken its collective journalistic eye off of the ball, they themselves may have spotted that Miss Edward's will contained no mention of "political parties" and clearly stated that the Government of the day should be the beneficiary of her estate to dispose of as they see fit. Which clearly did not mean these two spiv party leaders trousering her hard earned money to spend in their election campaigns.

In one of the very few articles the Guardian wrote covering this story, instead of pointing out that the Tories hived of £420,000, the lion's share of the £520,000 bequeathment while the Liberal Democrats received £100,000, they decided instead to try and divert attention away from that by mentioning that the Labour party receives  payments from the unions, like this is news, and that trousering an elderly person's half a million estate is not! They could have also reported that Miss Edward's left her estate to the "Government of the day" in 2001, when there was still a Labour government and that given what the Tories and Liberal Democrats have done to the NHS since coming to power in 2010, if she was making her will now it may have a completely different outcome! Instead  though  the Guardian editorial team are behaving like a gang of pathetic bullies who have even belatedly missed pointing out the hideous irony of these two greedy leaders in pocketing a former midwife's money!

What made the Conservative party and the Liberal Democrat party think even for one nanosecond that a former nurse/midwife who spent her life working in the NHS would want the two creators of its impending fragmentation and privatisation which are leading to its eventual demise to use her money to lie to people about the NHS in their future election campaigns?

The Guardian could have also pointed out that Cameron and Clegg's denials about knowing about this do not ring true, meetings must have taken place about this money because a way and an agreement in which to share it out among the two parties was reached! I find it totally unbelievable that the two sets of legal teams which work for the Tories and Lib Dems, both "conveniently" missed that wording, not only that, the solicitor of Miss Edwards also missed that wording? Poppycock, of course they didn't. I would hazard a guess that the three legal teams did in fact bring this to the attention of the Conservatives and Liberal Democrats and they decided to take the money anyway, which leads me to ask the question, who gave the go ahead for it to be accepted?

They say that Ed Miliband has a ruthless streak, perhaps it's time for him to show it and start doing some reverse "Ed bashing", at every chance he gets, he should simply ask:


Who agreed how the money was to be shared? When did the leaders become aware of the bequest? Were they consulted about how “they saw fit” to spend the money? What led them to the decision that their parties' own coffers were a fit use of the half million?

He will keep reminding people of this for the next two years. Every question on party funding should be answered with “Joan Edwards”. Every critique of the Government's priorities should have “Joan Edwards” as an addendum. It is the neatest, most direct and understandable reminder of the fact that the Coalition is hopelessly out of touch, ruthlessly self-interested and shamelessly immoral. Quote By   Alex Andreou - New Statesman

this nurse was a fool to give this government any money

this is the maddest thing i ever heard of