David Cameron's Gone To The Dogs!


Today as part of his attention grabbing overexposure on TV and in the newspapers, the prime minister, David Cameron has gone to the dogs, when he visited Battersea Dogs and Cats Home supposedly to welcome their 1000th volunteer. (We all know that the real reason was to have a photo opportunity with a few dogs.)

Great isn't it that Mr Cameron can go along to Battersea with press and film crews in tow to publicise that  he was associating himself with animals (as he and Lynton Crosby know we are a nation of animal lovers), but on the other hand Cameron had to be cajoled week upon week before he would visit a food bank in his own constituency and even when he did eventually go he refused to have film and press crews present!

So what is the difference?

Battersea and other animal shelters cater for animals and Cameron knows we are a nation of animal lovers
so doesn't mind being associated with cute cats and dogs with big sad eyes, while food banks on the other hand however, cater for human beings suffering from Cameron's government driving down wages, driving down living standards, cutting benefits and people being pushed into poverty without enough money to feed their families or heat their homes, cook their food or pay their ever increasing water bill. (Use of foodbanks has soared since the Tory-led coalition government came to power) 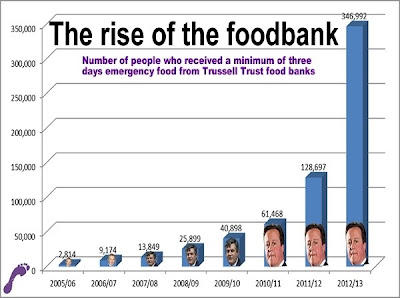 So when it comes down to it there is absolutely no contest,  animals with big sad eyes win precedence over starving poverty stricken children with big sad eyes each and every time, after all being photographed with some of the children the Tories have pushed into poverty wouldn't be a very good photo opportunity would it? The fag, booze and private medicine promoting Lynton Crosby, definitely wouldn't like that! 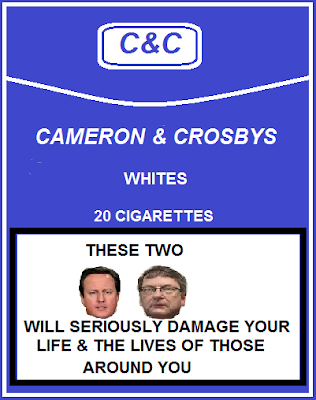 Welcome to Tory Britain 2013, where the government couldn't give a stuff not even about animals (it's all for show all for the cameras) and where the Tories and Liberal Democrats are dividing the nation into haves and have nots and pitting them against each other in some kind of 'war of superiority', ergo, I have money and material things and a job so therefor I am better than you, you "unemployed benefit scrounging poverty ridden scum"

Is the prime minister aware that people have been forced to give their dogs up for rehoming or worse still have them put down or turned them out because they can no longer afford to keep them, or they have been forced into living in accommodation where they cannot take their dogs with them because of the Tories vile bedroom tax!

What a pity staff at Battersea didn't take the opportunity to throw Cameron in a one compartment cage, (so he doesn't have to pay bedroom tax) give him a bowl of water which they will charge an increased charge for (as the Tory privatised water industry prices rise) and bung him a few cold  out of date tinned scraps from foodbanks making him live just the same as he and his government are forcing the poor, unemployed, low waged and disabled to live, who the Tories blame for being poor and sick!