Who Would You Rather Lead The Country- Honest Ed or Dodgy Dave? 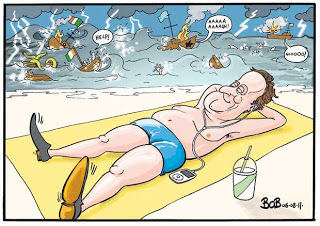 An ICM poll out for the Daily Mirror today is a really amazing piece of work, not only for its bizarre set of results but also for its timing!

After two and half years of being constantly undermined and personally attacked, followed by the last few weeks of being intensely battered and negatively spun against and blamed for just about everything imaginable by the Tory press, the Tory broadcast media, and their newest recruit to this bastion of  bullying right wing fiefdom, 'the Guardian' (see: The Lunatics Have Taken Over The Guardian); the Daily Mirror in their infinitive wisdom decided to pick this precise moment in time to commission an ICM poll to gauge how popular the Labour leader Ed Miliband is?!!! I know it's like wearing hobnail boots and purposefully stamping the hell out of a person's bare foot then asking them if it hurt, and by the way, do you like me? I mean what answers did they expect?

Apparently horrific images being beamed around the world of  people being forced to jump from their burning homes when the country was under siege from arsonists, rioters, looters and murderers in the summer riots of 2011 and the prime minister, David Cameron and the entire Tory led coalition cabinet were out of the country on holiday refusing to return home (because the PM had a Blackberry) pale into complete insignificance against the leader of the opposition, Ed Miliband's utterly "irresponsible" attitude in taking a summer holiday in the parliamentary summer recess with his young family. I mean the nerve of Ed Miliband, who on earth does he think he is? How dare he be unavailable to comment on the PM's snide attention seeking publicity drive and any other nonsense dreamed up by the right wing press in "silly season"? And surely everyone realises that the PM having a tennis coach flown out to his luxury Tuscan villa to help with his game and his photo opportunity with a Tuscan waitress (who he previously refused to tip) were far more important than returning to his country in serious trouble and where the police had lost control?

It must be silly season and the Mirror has bugger all else to publish as it afforded an entire page to the results of the poll and the Tory biased Sky News has been running this the whole day, must be of vital importance because Sky placed the ICM poll on Ed Miliband above the plight of unfortunate Egyptians being murdered by their own interim government.

3)..Then they ask if Ed should lead the party and make much out of only 28% Labour voters said yes and that only 16% ordinary voters said yes. What Sky doesn't do is put the question in context, as the question was a tick box where seven other Labour names appeared and still Ed came out on top....again move along nothing to see here.

4)..Should Ed get more help from his colleagues? 72% Labour voters said yes, so did 46% of ordinary voters ... again nothing surprising.

5)..Which of the three main party leaders do you trust? a) On the economy, b) to make tough decisions, on c) foreign affairs, Cameron came out on top, but Miliband was not that far behind so it was hardly a ringing endorsement, in fact don't know was the biggest winner by far. This actually is very bad news for Cameron NOT Miliband, as it is Cameron that is PM and Cameron who is constantly in the public eye taking these decisions etc, it is notoriously difficult for any opposition leader to break positive in these kinds of questions and they are not the one taking the decisions. Why would the public look to Ed Miliband to make these decisions? This kind of polling is a nonsense.
In d; e and f of the same question (5) comes even more bad news for David Cameron. d).To help society's poorest; e).to be honest with voters; f).to understand what life is like for ordinary people, Cameron 11%; 14% and 11% against Miliband's ratings of 35%; 22% and 26%  respectively. So on the question of being in touch with ordinary people, being honest and having compassion ed Miliband beats Cameron hands down.
But Sky News wouldn't tell you that!

6)...Which of the parties do you think is most likely to act in the *WHOLE* country's interests? Labour 24% Tories 19% Lib Dems 8%. AGAIN on one of the most important questions in the entire poll, Labour and Ed Miliband win, but Sky News doesn't mention it I wonder why?

7)..Which of the main political parties do you think has the clearest set of policies? Con..25% Labour 15% Lib Dem (the party in power don't forget) 8% Again why would anyone think the party of opposition should have clear policies, they are not the government, they are not even an alternative government at this point, they do not need to have policies, this only happens with opposition parties closer to a general election!

8)..Which of the parties is most united? Labour 21% and Con..21% Lib Dem 7% Score is level and hardly surprising after the last few weeks of constant 'Ed Bashing' and the has-beens and no-hopers and Blairites nitpicking and still they failed to knock Ed Miliband down!

10)..Which leader would you most like to have a drink with? Cameron 23% Miliband 21% Clegg 14% (If you do have a drink with David Cameron make sure you remind him to take his daughter home with him and not accidentally leave her down the pub!)

So on closer inspection and after years of "Ed bashing" which has greatly intensified this past few weeks, it comes down to this, the public do not really see Ed Miliband in anymore negatively than they would any leader of the opposition at this point in the parliament, in fact this poll holds out far positives for Miliband than it does the incumbent Cameron and gloomily for Clegg it shows him as an "also ran". Ed Miliband scores positively on all the questions that really matter!

What it really boils down to is this one question:

Who would you rather have running the country a decent honest person with integrity as well as intellect and who refuses to lie to voters for political gain, or a lying political spiv PR man like David Cameron?

After all the negative spinning, the lies and the constant carping against Ed Miliband and Labour the concerted right wing dirty tricks campaign has still not managed to fatally wound Ed Miliband, he is a lot tougher than people give him credit for and Mr Miliband still has his party ahead in the polls:

YouGov today has Labour 7 points ahead

The latest ComRes has Labour 11 points ahead.

Ipsos Mori has Labour 10 points ahead.

Anyone who can stand up to the constant barrage of negative spinning, be persistently lied abut and called infantile names etc and be egged by an idiot in a market when out meeting real people and listening to real concerns and worries of real people (whereby Cameron and Clegg only go to pre arranged destinies and only answer pre scripted questions they have been given the answers to) and still command a Labour lead, is tough and knows what he's doing. Ed Miliband is being constantly undermined and underestimated.

Of course the only poll that matters is a general election and from the look of the ICM poll results, I bet Ed Miliband is secretly praying Cameron will bring it on early!

I wonder if the polling company ask people to tick in order of importance; honesty, integrity, compassion and the asked who has all those qualities out of Miliband, Cameron and Clegg what the answer be?

Why isn't the press pinning the Cowardly Cameron badge on the prime minister?

The debates are supposed to help people choose between the leaders, what use are they months ahead of the election?