I cannot find the correct words in which to offer my most sincere heartfelt condolences to firefighter Stephen Hunt's family, colleagues and friends, Stephen was killed in an suspected arson attack in Greater Manchester over last weekend. My words seem trivial but they are sincere, they come from deep within me, as a mum I just cannot even contemplate the pain his family are facing right now, so to them I just want to say "thank you", your husband, dad, son, brother etc made a real difference in this life, not many of us can say this, no doubt many are walking this earth today who would not have still been here had it not been for the bravery of Stephen and his colleagues in the fire service everywhere. I am constantly in awe of their constant selfless acts of bravery under horrendous conditions, we run out, they run in, what words are there to describe people like Stephen that do not fall flat and sound inconsequential?

After each event or tragedy involving our truly wonderful public service employees, be they firefighters, police officers, nurses and not forgetting our armed forces (because they are public sector workers too), we are treated to the fawning concern of the Prime Minister, Clegg and Boris Johnson etc and I am sorry if this offends, but I am going to say it anyway, I'm sick of it, sick of seeing politicians using the brave men and women who put their lives on the line for our safety as political footballs. I hope that the PM's "concern" in sincere, from the bottom of my heart I do, I hope this for the families of those who have paid a high price and  those who have paid the ultimate price for protecting us and for those they left behind struggling to pick up the pieces of shattered lives.

I accept that as PM he has to say something, however, from now on I am going to turn him off as I really don't want to hear any more of the faux concern from Cameron, Clegg and London Mayor Boris Johnson and I refuse to allow them into my home, they are not welcome. I don't want to cast my eyes upon that default "sincere face" of Cameron's complete with curled top lip, that he seems able to conjure up at will (we saw that very same face when shortly before he became prime minister he faithfully promised a hall full of nurses and doctors that he would not be carrying out anymore top down reorganisation of the health service shortly before carrying out the biggest top down reorganisation in the NHS 65 year history!) But I would like to ask him this question: "How can you in all decency put that show on when you know that it is you and your government who have turned this country against our public sector workers, the very people you say you admire and respect when they sustain injuries or die"?  Have you no shame? You certainly are devoid of any kind of integrity!

David Cameron is good at putting on his sad face and speaking his sad  prepared words, but at the same time he and his government are stealing the pay and pensions of firefighters like Stephen Hunt at the same time as attacking the unions for doing their job in trying to represent and defend them. Does Cameron and Johnson think we do not know, do not realise, or are just too stupid to equate that the mealy mouthed words they utter happen to be diametrically opposed to what they really think of public services and public service workers and what they are doing to the NHS, welfare state, fire service, paramedics, teaching and the armed forces? Do they think we do not notice the closing of fire stations (12 in London alone) as well as reducing the number of firefighters placing those remaining at grave risk of injury and God forbid - death, as well as endangering the public?


Does Cameron and Health Secretary Hunt honestly believe that we will not notice he is closing down hospitals, maternity units, walk in centres, or that they have destroyed NHS Direct and caused chaos in every single A&E in this country with their unwanted, unwelcome reforms that have so far probably cost this country over £10bn?  Jeremy Hunt closes down A&E at birth place of the NHS without even telling the local MP.  Or that the prime minister is closing down maternity units that when in opposition he promised us he would save if he became PM? Or that we will not notice we now have over 4000 fewer nurses than in 2010 and this is placing an intolerable burden on the remaining staff?


Does he think we live in "blissful ignorance" that he has halved the size of the armed forces and found stealthy ways of cutting their pay and increments? Or that he sacked many of our wonderful brave soldiers by email after smiling in their faces on one his impromptu visits, that  screams "hey look at me, how wonderful and caring a PM I am that I visit the troops in Afghanistan" before returning home and sacking them leaving the country open to terrorist attacks etc.

I was so heartened to see the thousands of ordinary men, women and children from all walks of life line those streets for Fusilier Lee Rigby's funeral last week, it brought it home even more how much we should treasure and respect the people brave enough to place themselves in danger for us.

But I cannot shake off the truth that these are the very public service workers, that many private sector workers have set about demonising after being continually and subliminally prompted to do so by the likes of Cameron, Clegg, Johnson and IDS. These are the people whose pensions people say they want to stop, these are the people who have had their salaries frozen for three years already.

At times like these I realise how much I vehemently dislike David Cameron for playing his political games with the psyches of our people, dividing them and turning them against each other and turning this country into a cold, uncaring, insensitive place that I no longer recognise as my people, as my country, just so he can improve his chances of re-election!

I have zero respect for Cameron and his Conservative party, to me they are a bunch of self serving money grabbing, power mad, arrogant people and the Liberal Democrats are just as bad, if not worse as they knowingly help them. Respect has to be earned. 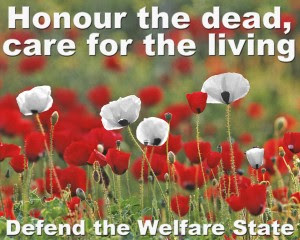 You have the respect and admiration of the entire country