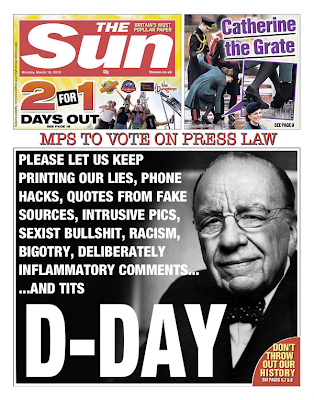 I am not under any illusion about our so called "free press", I've long since been under the impression that the "freedom" of the British press is only as free as the media tycoons who own it want it to be, they dictate what news is reported, and more to the point they dictate how it is reported! However, last Thursday when the news broke that the already disgraced private sector security company G4S, along with another private sector company Serco have allegedly been ripping taxpayers off to the tune of at least £50 million, more fool me, I did expect a strong media reaction from the press and the broadcast media. Why wouldn't I?  By rights any company suspected of, or found ripping off the public purse should be a huge story so I was astonished that it barely got a mention on the news and only made "also-rans" in the majority of the right wing Tory supporting press the following day. Only the Independent and Daily Mirror made it their banner headline and the Daily Mirror ran a huge story about it. Here and Here

Papers like the Sun, Mail and Telegraph hardly mentioned it giving just a couple of inches column space (if that), yet these are the papers that when the public sector sneezes will run huge stories "accusing them of infecting the population with deadly viruses"! These are the papers that act morally outraged when just one person abuses the benefits system giving it huge banner headlines and running double page spreads inside, completely misleading the public about how small benefit fraud really is.

That self proclaimed "bastion of moral indignation and public outrage" the 'Sun newspaper' virtually ignored the brewing scandal about G4S and Serco, bizarrely, their banner front page headline about a window cleaner who has been banned from whistling! I kid ye not! Apparently David Dinsmore the new editor of Rupert Murdoch's Sun believes that a window cleaner's whistle is more important than reporting and exposing that *private sector companies* G4S and Serco have allegedly ripped the taxpayer off to the tune of at least £50 million. When he was editor of the Scottish Sun Dinsmore once said he doesn't get into bed with any political party, well by the look of this he's just turned the sheets back for him and David Cameron to climb into and if they fancy a ménages à trois, then Dinsomore can also take his "mate" Alex Salmond in with them! Looks like one Cameron friend and Tory supporter in the Sun's old editor Dominic Mohan is out, to be replaced with yet another Cameron friend and Tory sympathiser David Dinsmore. Move along folks no changes here. Rupert Murdoch maintains his vice like grip on the Tory party and they in turn kowtow to him at every given opportunity.

My question is this, why did the majority of the Tory supporting right wing press virtually ignore this story? We all know that if this was the public sector ripping off the taxpayer to the tune of £50m the right wing press would have been apoplectic with rage, yet because this is the private sector and the government happens to be the Conservatives, it has hardly been mentioned.

Is this the way that private health companies are going to be let off in the future when they under deliver or when there is financial irregularities?

G4S nearly ruined the London Olympics through abject incompetence. Now even when the Tory controlled government have called in the Serious Fraud Office to investigate £50m worth of irregularities, Serco and G4S continue to be awarded contracts worth millions of pounds by this government!

Why hasn't the Tory government immediately suspended any award government contracts while this is being investigated?

Why isn't the media and broadcast media covering this story? If this scandal is being deliberately dumbed down and kept low key by the media is it because the right wing Tory press and the private sector and the Conservative party are inexplicably linked in some way?

If this had happened in the public sector and if this was a Labour government would the right wing press and the broadcast media have kept as quiet about it as they have done? We all know the answer to that, they would have never shut up about it and they would have been screaming it from the rooftops, yet because it is a Tory government - nothing!

If this were the unions allegedly defrauding the taxpayer of £50 million would the right wing press and the right wing broadcast media remain so sanguine? For goodness sake, the Mail on Sunday  nearly burst a blood vessel because union chiefs have the audacity to receive a pension, apparently it's OK for G4S and Serco to allegedly rip off the taxpayer, but it's not OK for union bosses to receive a pension, which is all declared and above board and transparent (which is why the papers know about it)!

Look how the right wing press and Sky News has behaved over the Falkirk/Union/Labour story, they went into overdrive, yet there was no misuse of public money, there was no fraud,  where is the comparison with G4S and Serco? Where is the media objectivity? The Guardian, a supposed left leaning paper (ha bloody ha) kept agitating and agitating over the Falkirk union story until they finally made it escalate, they are just as bad (no wonder their circulation is plummeting).

The Justice Secretary, Chris Grayling has called for an investigation into G4S and Serco, how many times have we heard this with this particular government? What will happen? Will anyone senior take this up? Will the SFO hold a low key investigation, report to Grayling,  the story gets a few lines in a few of the newspapers and then the story gets kicked quietly into the long grass and it's business as usual? (Ripping off the taxpayer), but that's OK because these are private sector companies!

These companies are taking millions of pounds in contracts from the Conservatives, where is the transparency that Cameron promised us? Why has he said absolutely nothing about this? Yet if this was Labour, he would be out in Downing St with his lectern blabbing on attention seeking (David Cameron have lectern will travel).

Currently Viscount Rothermere who owns the Daily Mail and is seeking to take full control of the Daily Mail  & General Trust, told the Leveson Inquiry that he sometimes feels uncomfortable about the stories appearing in his papers and that they go too far. Does he feel comfortable I wonder, about this story not being given proper coverage in his papers, instead going for front page banner headlines trying to persecute civil servants?

I could go on but you get the picture! David Cameron's links to the press in this country are deep and wide, it is one of the reason why Labour and Ed Miliband cannot get a fair hearing or fair reporting and their policies and comments are continually spun out of context.

I believe the PMs links to the right wing press in this country are the reason why the scandal of G4S and Serco were not reported properly. News is being deliberately dumbed down and kept from the British public, either at the behest of Cameron and number 10, or at the behest of newspaper owners and editors, or probably both.

We do not have a free press in this country, that is a big fat fallacy, what we have is the editors running the political lackey wing of the Tory party and the newspaper owners pulling Cameron's strings. It's obvious Cameron is not going to do anything to upset them, he lives in fear of getting a bad press - literally!

The Tory party itself is the political wing of the Banks, shadow banks, tobacco industry, oil industry, drinks industry, private health sector etc etc AND the press barons! Cameron is their puppet and he dances to their tune, as long as he does what they want, they will carry on giving him an easy ride in the press.

Don't expect Cameron to implement the Leveson press recommendations any time soon, you have more chance of winning the lottery 4 times in consecutive weeks!!

Meanwhile the public will continued to be lied to, ripped off and be treated like idiots by a party that pretends its a government, when all it is, is the mouthpiece newspaper tycoons, big business and the banks and multinational companies like G4S and Serco.

The press are actively helping the Conservative party to privatise the NHS, by continually misleading, misreporting and misrepresenting the facts and purposefully undermining the NHS, they are helping Cameron divide & rule this country by using diversion tactics.

Something Stinks in Westminster, it is the foul stench of Tory corruption!

a bit missing it was labour who introduced Serco having two labour peers Filkin & ford of Serco, and Reid of G4S, who did the Labour Conference as for #Murdoch, war criminal labour leader PM Blair was a willing poodle in Murdoch,s kennels ! ps how many unison members have been fired by Serco and is Unison in any way responsible for it by funding labour to hire Serco?

I know Labour introduced Serco, so what? It doesn't make what is happening between the Tories and the press and Murdoch right does it?

If you can only counter what this lying scum Tory government are doing by pointing your finger at Labour and mentioning Iraq (again) then you don't have much of an argument, in fact, you don't have one at all.

I am not defending Reid, I dislike him intensely, I couldn't care less if he were kicked out tomorrow.

G4S and Serco were not given the freedom to do what they are doing now and if this was exposed under a Labour government we would never j hear the last of it (as you yourself have just proved)!