For ALL Those That Missed Nick Clegg's Speech Today 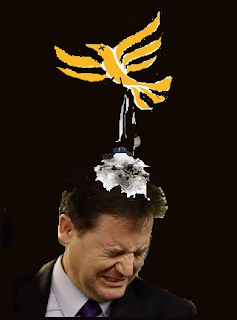 Here is Nick Clegg's assessment of the year with in bondage shackled to the Tories.
"Fair to be fair, it's only fair ..labour, labour, labour this - labour that - labour the other. It's not fair, it's all labour's fault, to be fair it's not my fault it's really that Ed Miliband's fault... It is labour's fault we lost 800 seats and to be fair it's not really bad that we lost 800 council seats, it is really a very good thing for the Liberal Democrats, don't ask me why, I just think it is. In any case to be fair it's all  labour's fault. Labour, labour, labour. (Clegg bounces about some more waving his hands about like a practiced preacher at the pulpit) Cameron told me I must mention Muscular Liberalism so here it is "muscular liberalism" I don't know what it means, I don't got to the gym, muscular liberalism, muscular liberalism. You may not believe what I am going to say about the Tories next; "er the Tories erm George Osborne, David Cameron". (Tory attack over) Labour, labour, labour, they have no idea about the economy, labour labour labour. to be fair, fair, and urm it's not fair you know. Only the Liberal democrats know best the other two don't, that is the Lib Dems are a poor third, but the Lib Dems being a poor third in polls is really quite good, spiffing in fact it proves that the Lib Dems have got it right. Labour have it wrong which is why they are not doing better in the polls, labour leading the polls and their 42% is quite rubbish, it is better for the Liberal Democrats to be on 8%, this is why I am telling you that labour are rubbish and we are better" labour, labour, labour. Labour this - labour that - and labour the other. labour, labour, labour..AV AV pluralism, I'm a pleuralist..labour labour labour and then he finishes with "I Nick Clegg to be fair am wonderful and it's all labour's fault that the electorate think I am a complete nob head"...end of speech.
Posted by Gracie Samuels at 11:02:00 AM

Hi Gracie :)
Have you seen this i warn you it's very serous and i have spoke to the guardian with regards this clip

I know you left a post on here because I followed the link. Blogger was down for maintenance this past 24 hours it was in read only mode and they removed all posts, just wanted you to know.
I did follow the link, I think if it is the same, I heard this before where the chap rang up, I thought it was excellent what he did and it should really make people sit up and listen and realise what is going on, however, will it? This awful government do not want to listen to anyone