NHS Hospital Waiting Lists Grow - The NHS is NOT Safe In Tory hands! 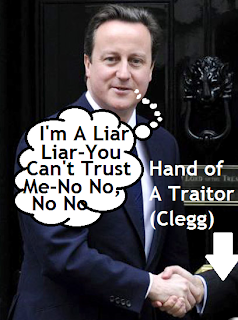 All my fears and concerns for our NHS are coming true. NHS waiting lists are growing, more operations are being cancelled and treatment is being rationed in the first signs that a funding crisis is threatening care, thanks
to the Tory-led government.
How long has David Cameron and  his Health Secretary, Andrew Lansley, known about this? Is this why the prime minister hung Mr Lansley out to dry last week over the ill-fated NHS reforms? Is this what their hastily announced listening exercise is all about? So really as suspected "the pausing, the listening and the reflecting" had nothing to do with anything, what really happened is Cameron was shown these latest findings of his government's useless policies and total incompetence and recklessness and got the wind up, so he used his Health Secretary as a human shield.
If things are this bad now think what they will be like when this feckless government attempt radical reforms while demanding £20bn in efficiency savings and forcing GPs (with maybe a couple of token clinicians thrown in) to become accountants as well as doctors when official figures already suggest pressure is already mounting in hospitals.
David "pathological liar" Cameron promised in his party conference speech in 2006, "no more pointless and disruptive reorganisations" and pledged: "The NHS is safe in my hands.", well his words are now just empty rhetoric, meaningless, he and the Tories are no defender of the NHS, that is quite clear as we slide back to a return to health service chaos seen under the Tories in the early 1990s.

The number of emergency operations cancelled by hospitals in England has risen by a quarter in the past seven months to almost 250. Separate statistics show a rise in the average monthly number of cancellations of routine operations for non-clinical reasons. This rate from April to December was higher than in the previous year at 40 per cent of hospitals. Nineteen trusts cancelled more operations in the nine months to December than in the whole of the previous year.

On Friday, it emerged that Imperial College Healthcare Trust, which runs several hospitals in London, is facing a £40m shortfall in its finances and a backlog of orthopaedic and trauma cases.
Growing numbers of patients are having to wait for more than four hours to be seen in casualty departments, and the proportion who still had no bed four hours after being admitted doubled between April and December.
The Independent on Sunday has also learned that some doctors are rationing contraception to save money, and that child obesity programmes have already been cut back.

I wont say I warned you what this idiotic dishonest shambolic government's policies would do to the NHS, but I did - repeatedly.
﻿

This NHS overhaul is going no ware as the doctors and nurses are not daft.
I sometimes wonder about those educated at oxford as in the hands of the wrong people like the conservatives it seams to be a deadly destructive force normally to be used against decent people
Hopefully Andrew lansley will resign and that will give David Cameron a wake up call