Yeah But No, But Yeah But Clegg 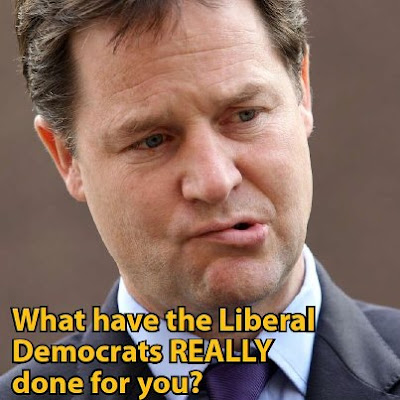 "I didn't know, but then I did know, but it's OK because I didn't know I knew, but more to the point, I didn't want the public to know that I really did know".

When I did know (before I didn't know that I knew) about the Rennard allegations, I instructed Chief Secretary, Danny Alexander to have a word and then discretely bury the whole business then take action. Danny just cannot remember what action it was that he took and I didn't know that but I know it now. It's no good asking Jo Swinson, because although she knows and has said she knows about the allegations and took action, it must be the same action as Danny Alexander took because they now both don't know what it was and have only just remembered they don't know.

Confused? Well remember Nick Clegg the Deputy Prime Minister is the same man who "forgot he was in charge of the country", what do you expect?

Jovial and well written little article, although a very serious subject. This has sadly become the norm for the squirming establishment as it stands today.

"Nothing to see here folks, move along..."

I for one will not be a good little 'subject' and STFU. We must spread their blatant lies across the intardnets, exposing them for what they really are.

To subvert the truth in order to further their own agendas is treasonous and we must not tolerate it any longer.

"All truth passes through three stages. First, it is ridiculed. Second, it is violently opposed. Third, it is accepted as being self-evident. -Arthur Schopenhauer, German philosopher (1788 – 1860)"

Thanks for the research that you do.
~TJ

I agree TJ and I am going to keep on exposing it wherever I find it. This country is being reduced to one big heaving mess by narcissists who only have their own political agendas.

I personally think it bounds far beyond any narcissism. I've of the opinion that it's criminal and controlling and relatively evil at it's core. After all, the European Common Market which as you probably know was the precursor to the EU, was itself a brainchild of the Nazi state.

Our political puppets are just that, they have no real power. It's a very well construed illusion but it's breaking down rapidly thanks to research like yours and others.

Have you read into Agenda 21? Shocking stuff.