Nick Clegg and the Nothing in Particular Award 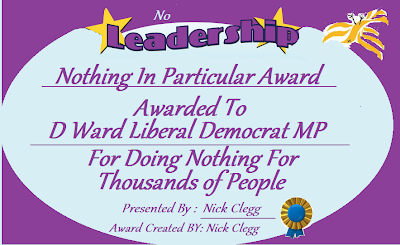 This is a weird little story, the Liberal Democrats actually invented an award and then awarded it to themselves!

It was awarded to Liberal Democrat MP David Ward, for helping "thousands of people" and was presented by Nick Clegg, only no one seems to know what the award is or why it was awarded. or why Mr Ward was chosen to receive this "award". It doesn't even say how exactly he helped these "thousands of people" - very odd. We can only surmise that Nick Clegg  made the award up and awarded it to Mr Ward for doing his job as a constituency MP.  Perhaps Nick Clegg awarded the award to Mr Ward because his name was Ward? Pity his first name wasn't Anthony, Adam, or Alan or something then it could have been A Ward. Source: Political Scrapbook
Posted by Gracie Samuels at 9:55:00 PM