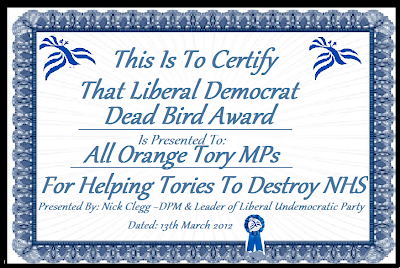 Last night we probably saw the death of the NHS, this is in despite of all the efforts put in by the majority of all health care professionals and all who work within the NHS, the Labour party, in particular the Herculean efforts put in by Andy Burnham, Shadow health Sectary and especially by doctors like Consultant Oncologist, Dr Clive Peedell and his colleague Dr David Wilson.

Sadly it looks like we have lost the fight to save our NHS and the green light has been given to the Tories to destroy it (just as they have always wanted to do) by Nick Clegg and his Liberal Democrat party. Respect is given to the handful of Lib Dem MPs who had the courage to stand up to their own leader and vote against the bill.

The damage set to be done to one of this country's greatest achievements is immense. The NHS has been built into what it is today over 63 years and it has taken a much reviled Tory-led coalition government just 20 months to set about its destruction. Post war Labour party Aneurin Bevan, the chief architect of the NHS, would be turning in his grave, however, both the Conservative and the Liberal Democrat parties should remember something that Aneurin Bevan once said :

"The political party cannot survive which destroys the NHS"

The Health and Social Care Reforms Bill is being forced into statute at a time when the country is undergoing severe austerity and government is forcing the NHS to save £20 billion, which is already resulting in cuts to front line staff. The bill itself is costing the country £3.5 billion, money that could have been really effectively targeted into patient care, like cancer treatments, cardiac treatments and children's services etc.

When this bill is enacted it will end up costing the country and business colossal amounts of money. This is money that will be taken out of the NHS and put into the bank accounts of private companies. Money will be siphoned off in fraud - like A4E -  and inflated management costs - like railways and the utilities. The bill replaces 3 layers of bureaucracy  with 7 layers of bureaucracy.

One of the areas that this bill will impinge heavily upon is 'mental health'. Where the fragmentation of services that this Bill will bring in will only be mitigated by adding layers of red tape & bureaucracy that will tangle up the efforts of all those involved in administering mental health and will put mental health reform back decades.

With all the various reforms taking place in this country  soon we will have no effective policing, no health service, no support for the vulnerable in society, no support for the disabled or terminally ill, people are already being made homeless etc. Within the NHS serious problems are already  coming to the fore, increasing waiting times and waiting lists and the abolishment of the 4% cap Labour placed on treating private patients has now been extended to 49%, means that private patients will be treated before NHS patients, queue jumping for people who have money etc.  The government keep telling us they have no money but notably there is still plenty of bonuses for the bankers, and all manner of benefits created for those who financially support the Conservatives. Check out A4e HERE.

Care UK
John Nash and Caroline Nash also own the Hedgie a hedge fund company that profits out of miseries in recession Have donated £100,000 to the Tories including a £21,000 donation directly to Health Secretary, Andrew Lansley's office.
Lord Blyth - Boots Chemists deputy chairman. Tory Donor. Stands to gain from the break up and privatisation of the NHS wants to buy the Walk in Centres. (Rumoured that a deal has already been done, despite the reforms not on the statute book yet)
UK Pharmaceutical Industry Courting the Conservative party -
The UK pharmaceutical industry has also begun gearing up for a change in government, as drug companies have been reshuffling their public affairs teams and courting the Conservative party. The American Pharmaceutical Group handed public affairs briefs to Hanover Communications, who also represents National Health Service (NHS) cancer screening departments, and in December 2009 hosted a meeting on the Conservatives’ approach to regulating busines

Private Health Care -  companies had donated £750,000 to the Tory party, asking: Doesn't  the Prime Minister see the conflict of interest in this?

Sir Peter Gershon - Chair of Healthcare UK and whose company stands to benefit millions from NHS cuts, which Sir Peter himself helped the Tories to draw up! If ever there was a clear cut case of conflict of interests this is it.

Ryan Robson - Major Tory donor who has given the party £252,429.45 his company invests in numerous private healthcare firms including Choice and Christchurch Court, which provide specialist and residential care.
His donations included £50,000 to be a member of the party’s “Leader’s Group”, a secretive cash-for-access club. The would-be MP, who tried but failed to get selected as the election candidate in Bracknell, is managing partner at Sovereign Capital.

Dolar Popat - Nursing and care home tycoon  has given the Conservatives £209,000.
Has amassed an estimated £42million fortune as founder and chief of TLC Group, which provides services for the elderly.
Mr Cameron made the businessman a peer shortly after entering No10 last May, and Lord Popat’s donations include a £25,000 gift registered a week after the Tories’ health reforms were unveiled  in July 2010.

Sir Christopher Gent - non-executive chairman of GlaxoSmithKline, (drug company) has given £113,400 to the Conservative Party.

IC Technology- which provides computer services to the NHS, has handed the Tories £70,000 over the past two years.

Philip Scott - chief of the Priory Group, has donated £20,000.
The famous Priory Clinic is private but Mr Scott has revealed in the past most of its income comes from NHS or local council referrals.


The Trichological Clinic Limited - which operates out of Harrods has handed balding David Cameron and the Tories £10,000 last year.

Senior Tories - who helped formulate the party’s health policy in Opposition have had links to private health care and health insurance firms.

Dr Mark Lloyd-Davies - Defeated Prospective Tory MP for Bristol South.
Would have made a valuable addition to the Conservatives’ pharma-friendly team. According to the Conservative website: “Mark is the UK head of the pharmaceutical government affairs and communications team in the world's largest healthcare company [Sanofi-Aventis], so he’s already familiar with the workings of Westminster.”


Mr Heathcoat-Amory- FORMER Tory MP for Wells and a former Treasury minister, registered a payment of "£1,671.08 and health benefit to the value of £86.17" in July from Western Provident Association, which provides private medical insurance policies.
The former  MP also worked as a non-executive director for the firm, which pays him around £20,000 a year, as well as his former duties as a constituency MP.

Helen Whately - Former Conservative parliamentary candidate has shrugged off any suggestion of a conflict of interest, after it emerged she works for the same consultants helping draw up plans which could see the A+E or maternity unit at Kingston Hospital removed.
Her website states she works as a management consultant specialising in healthcare, mainly in the NHS but does not mention her employer McKinsey.

Andrew Lansley and Simon Burns  attended an oncology conference in the US paid for by Aventis Pharma.


Why are we as a nation standing by and watching while vultures from private health care companies swoop down and pick over the bones of our  NHS, an encouraged to do so by the Conservative led government? The same Conservatives who accept millions of ponds in donations from these companies and individuals connected with these companies.
Even if these donations are registered in "Members Interests" what does that prove? It doesn't make it right, all that goes to serve is that MPs and Lords are covering their own backs while they accept ludicrous amounts of money from what appears to be k fake positions within these companies.

Why aren't the press investigating this? The press are forever moaning they want a "free press" but they themselves fall over to write complete gush and muck that runs from the rat infested sewer of the Tory party.


These companies do not donate to political parties for nothing, they donate to try and influence g future policies, lucrative contracts etc

Cameron is forcing the NHS reforms through  Parliament the NHS reforms without listening to the bill's critics using outdated legislation. Cameron, Lansley and Clegg are also trying to stop us from viewing the transitional Risk Register. They have been order to publish the Risk register  twice by the Information Commissioner and twice they have ignored the order. One must ask what is in that is so bad that they do not want us to know?


There is absolute no need for this complete upheaval of the NHS. We have one of the most revered and cost effective NHS's in the world, we will NOT sit back and allow Cameron, Lansley and Clegg destroy it.

Time is running short for us to stop this bill, however we must give up, if you care for the NHS please fight for it against one of the most right wing governments this country has ever see, hell bent of destroying the NHS, welfare. Lord Owen has thrown campaigners against this bill a life-line please See Green Benches and please help.