Tories Casting Around For More Benefit Cuts to Fund Another Millionaire's Tax Cut! 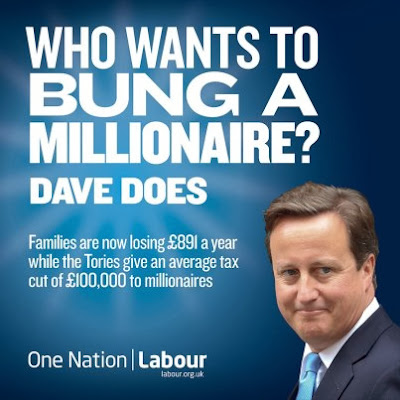 Millionaire MP Mr Zahawi was recently discovered charging the taxpayer almost £6000 per year to heat his 20 horse stables and to heat his stable manager's mobile home. He claimed it was a mistake, however, if an ordinary person was to make a 'mistake' like this, they would be splashed across the Sun, Mail and Express, be held up as 'typical' of the working class 'plebs' referred to as 'idlers' shirkers' and 'scroungers' and hounded to within and inch of their lives and would certainly face prosecution and prison. But if you are the millionaire Tory MP close friend of PM David Cameron you get to get away with your 'indiscretion', in much the same way that Liberal Democrat MP David Laws did when he was discovered fiddling over £50,000 housing allowances, he got a slapped wrist and given a week off. Mr Laws has now been brought back into the government and rewarded for his little 'indiscretion'.


The Family Allowance Act 1945 was an Act of parliament and part of the Beveridge Report in 1942 that came into operation in August 1946, it was the first law to provide child benefit to help with raising children in the UK.

There could be a debate to be had about why anyone should be in receipt of child benefit at all in this day and age, if all people were paid a proper rate for their job and paid so they could actually support their families, there may be a case for paying out less in these kind of benefits, but as I suspect that this would force the Tories benefactors, the big companies, the corporations, the energy conglomerates and the nationals and multi nationals and the bankers who donate millions to the Tory party to pay YOU a decent wage, I suspect that this is a debate that the Tory controlled coalition government would not like to have, because it may expose the appalling anomalies that are hidden within our system, anomalies which are there to keep the poor downtrodden and in their place and ready to do any old menial work and be made to be grateful for it! Face it we are becoming cheap labour fodder. 'Social mobility'? What social mobility? It's all Tory talk.

If child benefit is to be stopped for those who have more than two children, then why does Zahawi and Cameron think it should start with the poorest in society? How would making a poor family even poorer help? How would taking money from someone who had a good job and could well afford their three children and then became unemployed through no fault of their own actually help? or are we going to go down the road of social engineering?

The truth is of course it won't help because the odious Zahawi admits that this wouldn't be done to help anyone - except for the Conservative party. Zahawi is charged with coming up with policy that will attract voters to the Tory party and this is a naked and blatant attempt to buy the 'nasty vote' for the Tories, it is being mooted in order to attract voters who seem to have forgotten they were once children themselves and whose family no doubt collected 'Family Allowance' for them.

Probably millionaire Tory MP Nadhim Zahawi collected child benefit for his THREE children, why wouldn't he when he collected £6000 per year from the taxpayer to heat his stables, his managers home, and his own home? After all he must be really hard up, so it's 'understandable' that Tory chancellor George Osborne should give him a tax break of £100,000 and now according to the autumn statement it looks like he will be getting another huge tax break of around £100,000, when his income tax is reduce still further. Good that he is casting around looking for cuts to made so the chancellor can fund these tax cuts for millionaires!

And he is currently claiming £170,234 for his expenses and second home from the taxpayer, the man just loves to claim! He has 31 acres of land in Warwickshire, with stables run as a livery yard registered in the "Register of Members' Interests" as Zahawi & Zahawi Ltd. Zahawi is also a registered owner of a residential property in Putney, which he bought for £1.85 million in December 2005. Zahawi & Zahawi Ltd is a business consultancy company registered to the same Putney address with Companies House. He also has three rental flats in London, and is a non executive director of a London-based specialist recruitment company called "SThree", from which he had a monthly salary of £2,916,67.  He also founded YouGov Pollsters and is a registered shareholder. Lynton Crosby the PM's lobbyist spin doctor also happens to be a director of YouGov.

Not to be outdone Conservative Chairman millionaire Grant Shapps aka Michael Green aka Seb Fox of 'dodgy' website notoriety yesterday waded into the argument with another 'Shappsism', he goes one step further, not only does he want to rob and bludgeon and take money off the poor with more than two children, he wants all people all are unemployed to stop receiving all child benefit. So if you lose your job and are struggling, millionaire Tory MP Grant Shapps thinks it would be cool to  make your struggle even harder by taking away help with child support.

Has Shapp's 'Shappsism' found a cunning way to help plug George Osborne's black hole in his finances over his promises on the cost of the free school meals and pupil premium policies? Apart from it being a barking mad suggestion (why is Shapps even an MP he is not not even nice but dim, he's just incredibly dim), how would it work? Would it apply to those people forced to do temporary jobs and are always in and out of work - now you have child benefit now you don't - sort of thing? What about part-timers do they qualify with IDS new hours penalties? Zero hour contracts? Those forced to work for nothing on government workfare schemes, will it apply to them? The cost of these policies is assumed to be swallowed up in the overall spending envelope from 2016-17. In other words, they are NOT costed and those costs will have to be found at a later date by slashing even deeper into other spending.

And the Liberal Democrats are not much better, in fact in many ways they are worse, they are enabling this government to privatise the NHS. Cut ESA and declare terminally ill people and disabled people fit to work. They  hide behind falsified unemployment figures and pretend there is a recovery when it is just an over inflating housing bubble. They are helping them pass legislation that enables them to charge poor people the bedroom tax. They help to make people homeless, they turn a blind eye to the escalating numbers of foodbanks and the fact that the Red Cross has put out an appeal for help in providing food parcels to British citizens and that Save the Children and Shelter are warning of a catastrophe in child abuse and child homelessness that has soared over the past three years. The Lib Dems of all people turning a blind eye first to the trebling of tuition fees now to the selling of student loans which means that after graduating students with or without jobs will be hounded to pay back their debt to debt recovery companies or face prosecution. The Lib Dems voted WITH the Tories to abolish EMA making it harder for kids from humble backgrounds to continue with higher education.

Follow the money, there is always a 'cunning plan' to take away from the poor and now the squeezed middle and give to the rich with everything the Tories do. They give with one hand and take three times more away with the other.

First this Tory controlled coalition government came for the disabled, the sick, the poor and the vulnerable and the unemployed and you kept quiet and rejoiced at others hardship because you didn't think they meant you - now they are starting to come for you and your family and your security is at risk, what do you think now? This is just the start - still think it's a good idea to vote Conservative?

It affects *YOU* too!

Gracie - is it worth writing to the Metropolitan Police asking them to investigate this fraudulent act with a view to prosecuting him?