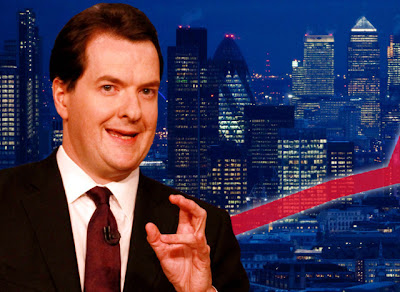 OK GDP figures are out and we have 1.% growth and the government are wetting themselves with excitement, I'm not, I am nothing if I am not a pragmatist.

When this government took over from Labour in 2010, Labour had already put in measures that were starting to reduce the deficit, as usual, Cameron and Osborne are taking credit for it. Now this past few months up until August 2012  welfare payments have risen and the structural deficit is rising, in fact it has risen by 22% up until August.

So we have growth of 1% for Q3 big deal. First thing I'd like to say about that is watch out for the readjustment, it will almost certainly be readjusted down. The government is in a hole and they want help getting out and over estimating the level of growth in the economy  allows them to try and do this.

Showing they can be about 1% out at any time... basically we have flat-lined, or slightly in recession and that means in real terms our value has decreased.
"Given that GDP contracted in each of the last three quarters and has barely grown at all since George Osborne came to power, even growth of 1.0% in Q3 will mean that GDP is on course to have been flat in 2012. This is quite a contrast from the 0.8% growth predicted by the OBR as recently as March, never mind their 2.8% prediction in the June 2010 pre-budget forecast."

Unless we drastically change the way we do banking and business to a more ethical form of capitalism (Ed Miliband being proved right [yet again] in his 2011 Labour conference speech), this is exactly the way it will stay. However, Cameron and Osborne have their heads firmly stuck up their rear orifices and they either do not want to know what they are doing is wrong because they are too scared to take action which would almost certainly see the Conservative party lose millions of pounds in Tory funding from their corporate donors, and banker and shadow banker donors. Or they just don't know what the hell it is they are doing and they are just stumbling blindly on hoping for the best regardless, personally I believe it's both.

Meanwhile the poor are getting poorer and the rich richer. Actually, it is the poor and low paid who are being forced to bail the greed of the bankers out with wage freezes, reductions in working hours and or benefit cuts and no amount of George Osborne trying to act compassionate on TV today will ever change the fact that the Tories do not give a monkeys nuts about the poor, disabled and vulnerable. Like Cameron, Osborne and Clegg really give a damn! It is noted that Osborne's mug has been springing up all over the TV today because the news is good, all other times when the news has been bad he has hidden and sent out Chloe Smith to appear on Newsnight to take the flak for him, like a lamb to the slaughter!

How ironical it is that the previous Labour government who this Tory led coalition have attacked and blamed for just about every single ill in the world, from next door's cat getting lost to the work ethics of Greece and Spain, is the government that won the Olympics, undertook successfully the organisation and put the colossal task of the infrastructure in place and did the lions share of putting on the best Olympic Games the world has ever seen, have, through Olympic ticket sales etc, actually boosted our growth in 2012 and helped the Tory led government out of a hole.
Todays figures include a 0.5% bounce due to lost output in the long weekend of the Diamond Jubilee and Olympic ticket sals and TV rights are all scoring in this quarter (Q3)

Will we hear David Cameron and George Osborne admitting this? Will they be just as eager to hand credit where it is due, as they are to attack the previous Labour government? Will they thank the Labour party for helping lift the country out of the longest double dip recession since the war, a double dip recession made in Downing Street?

Let's not forget that when Labour handed over the economy to the Tories in 2010 it was already in recovery with falling unemployment and the Tories reversed this and choked off the recovery. When the Olympics and possibly Christmas are taken from the next round of figures, we could enter a triple dip recession - who will Cameron and Osborne blame for that?

Unemployment is not coming down, why are this government insistent on trying to fool the public? Part-time jobs are rising and hardly any full-time jobs are being made. I pointed out in a blog a few days ago that Britain's workers are becoming a nation of part-time shop assistants.

This country is being run into the ground by a bunch of arrogant posh boys, quick to claim credit for things they have no business claiming credit for and refuse to admit when they are wrong. Let's see what Q4 and Q1 brings before we allow Cameron and Osborne to start telling us that Britain is a "safe haven" and we are "now over the worse of it", like the fools did a few months after coming into power when they were dining out on the swansong of Labour's economic legacy, which was not near as bad as is being made by some in the Tory and Liberal Democrat parties.

Osborn has claimed that the UK borrowing is low because they all approve of his austerity plans (the same austerity packages that plunged the country in the longest double dip recession since the war and the same austerity packages that will probably plunge this country into a triple dip recession). Sick if these lies being reguritated all the time by sycophants like adam Boulton of Sky News (I sometimes wonder if he is taking a back hander from the Tories or perhaps want a top job with them whatever it is his crawling is becoming an embarrassment!)

Who did these interest payments rise under Adam? It wasn't Labour was it? Be honest man.

The deficit myth is the worse economic lie ever put about by the Tories and people like you Adam, it is used to exploit people's economic illiteracy and people like Adam Boulton of Sky News push it on a daily basis for the Conservative party - why? What is in for them?

The real reason why our borrowing costs have fallen and remained low since 2008 is because, the demand for bonds have risen and there is a an expectation that they will remain high because the markets expect the UK economy will remain stagnate. In a nutshell, consumers and businesses are not spending. As result, saving levels have risen which, has increased the demand for bonds and increased their price. There is a inverse relationship between the price of bonds and its yield- return or interest rates.
Hence, if a £1000 20 year bond is at an interest rate of 5% you would receive a return of £50 per annum. Now suppose the demand for bonds rise because, more people are saving. Lets assume it rises from £1,000 to £1,500. With the interest rate remaining the same, the return will also remain the same at £50. Hence, the new effective interest rate falls because £50 / £1,500 = 3.33%.
Secondly, the markets have confidence in the UK because, we are not in the Euro and we can devalue our currency to increase exports. (Thank Gordon brown for that, it was he that kept us out of the euro and NOT William Hague's little £ campaign) Further more, the markets are assured that the Bank of England have the option of printing money to buy up bonds in an event of any sell off - which increases the demand for bonds and reduces its price. Moreover, UK bonds are attractive because, we have not defaulted on its debt for over 300 yrs.
Don't take my word for it, take the words of Conservative Ramesh Patel (the only Conservative I know of who actually speaks the truth!)
We need to see a sustained upward trajectory, then perhaps the banks and companies who are sitting on huge piles of cash may feel confident enough to actually spend/loan some of it, because at the moment they are not spending and not lending to consumers because they have zero confidence in where the UK economy is heading. Even that old right winger Mervyn King at the Bank of England has issued dire warnings about the economy and said the British economy is "zig zagging".

A word of caution here about not putting too much in store by today's figures, we have 80% of cuts yet to come with a further £16bn to be announced in the Chancellor's autumn budget. This is going to put a tremendous strain on the economy - again! Even the IMF have warned that austerity is having a huge impact on UK growth!
There is also no sign of a let up in spending power of the consumer, we may see a rise over Christmas, but it will only be seasonal and January will almost certainly slump again.The squeeze on living standards continues and with huge hikes in the prices of utilities, there will be even less money for high street spending. The slowing pace of the global economy will impact on UK exports.

Cameron and Osborne are now walking a fine line, on one side they are fighting not to over egg the economic pudding, on the other side they want to keep on issuing dire warnings about the UK economy and use this to sell their austerity measures to us and this is how they continue to force their right wing doctrine on us and are able to dismantle the welfare state, education, the police, railways and the NHS brick by brick and hand it all over to their mates in the private sector to run in the form of multi-million pound contracts at what will be a huge cost to us in personal terms and in terms of in which shareholders bank accounts our tax pounds end up.
This should be the mantra of David Cameron, George Osborne and Nick Clegg and all the rest of the liars:

Great read Gracie, shame it cannot be printed in one of the Tory papers.