Another day - Another Slogan "Tough But Intelligent"

Yesterday David Cameron's much advertised "big speech" on law and order was billed as; "Tough but Intelligent" yaaaawwwwnnnnn. Another day, another tiresome Tory slogan (remember we're all in this together and the big society?) which has left me wondering just how 'intelligent' it will prove to be to cut funding to law & order by 20%, and sack at least 15,000 police officers over the next five years and still expect crime not to rise?

Unusually for Cameron the speech was fairly short, but I suppose he was talking to a room full of journalists and  professionals working in the justice system, and not preaching to couple of hundred of the converted at the Tory party conference, there was only so much waffle he could feasibly get away with.

The speech was short on just about everything! Short on substance; short on new ideas, short on policy and missing entirely was the funding to pay for anything. Just more empty rhetoric and lacklustre bluster.

The whole thing was pitiful and left me wondering why he made the speech in the first place, was there a particular reason? And when did he decided to make it? I have a feeling that it will be a speech that will come back to haunt him, he's already under fire for making up energy policy on the hoof in PMQs in the House of Commons last week and that "policy"announcement had all but folded before Cameron had even left the debating chamber!

Social Impact Bond Pilot Scheme - Cameron spoke about the SIB pilot scheme, what he didn't say was this was put in place by the previous Labour government in March 2010 when Jack Straw was Justice Minister. It's a scheme lasting six-years and it is aimed at reducing reoffending in Britain's jails .It will see around 3,000 short-term prisoners, serving less than 12 months, receiving ‘intensive interventions’ both in prison and in the community. It is to be funded by the private sector, who will be paid upon results. Normally this wouldn't matter, but this deliberate misleading and misrepresentations are becoming Hallmarks of the Cameron government. He announced he is extending this scheme, why when the scheme is barely 2 years old and has another 4 years to run and the data is not yet known? Surely the whole idea of a pilot scheme is to assess it as it is being piloted, looking for pitfalls, errors in the system and finding solutions and even stopping the scheme if it proves unworkable, not blindly rolling the thing out nationally without having a fair idea of how it will work out? This could prove to be extremely dangerous, yet when has reality and public safety ever stopped "call me Dave" from trying to grab the headlines? Remember his disgusting attempt to grab the headlines and defame the unions? That ended with him causing a fuel panic at the pumps and massive disruption in the country, whereby a woman was seriously burned trying to decant petrol for her daughter's car and almost lost her life, as it is she will bear the scars of her terrible burns for the rest of her days!

Police Should have Our Respect - Cameron says! Yet he hung on to his Chief Whip, Andrew Mitchell for a month before accepting his resignation for swearing and insulting police protection officers in Downing Street calling them "fucking plebs" and screaming at them to "know their fucking place"? It's a funny kind of respect when you persistently infer that the police were lying in their written accounts of the incident and allow your Education Secretary, Michael Gove, to go on national TV and infer exactly the same thing, not just once, but twice! In his speech to the party faithful at the Conservative party conference he failed to mention the two WPCs who were murdered in the line of duty in Manchester, in direct contrast at the Labour's party conference they held a silence to commemorate the fallen officers. In fact Cameron failed to mention the police at all in his speech, he didn't even bother thanking them for giving up their off duty to police the Olympics after he and his government completely cocked-up the Games security arrangements. Obviously in yesterday's speech he was hoping to atone for that unforgivable error and laid it on thick with a trowel, calling the police "instinctively selfless" etc. Too little - too late! Today he is still backing his ex Chief Whip Andrew Mitchell, and is inferring that the police are liars! "Police should have our respect"? It's all just words.

Knife Crime -  Again he promised sentencing on knife crime would be "toughened up", but then when in opposition he also promised that anyone caught carrying a knife would be "sent to jail" - he has already reneged on that manifesto pledge and he expects us to believe this now?

Two Strikes and Your Out - How can this possibly work with 15,000 fewer police officers and huge cuts in funding and a probation service almost in melt-down?

Probation Service -  He promised a better probation service, yet his government are cutting the probation service by up 25% This morning this 'omnishambolic' government announce plans to overhaul the probation department using the same failed model as forcing the unemployed to work for nothing. G4s- A4e. More taxpayers money literally being tipped into the coffers of the private sector of total incompetence! 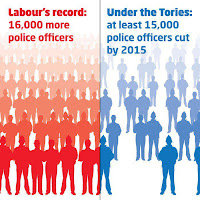 Reduction in Crime - He talked about a 6% reduction in crime, but how long will this continue? During Labour's 13 years they kept their election manifesto to increase the number of police officers and we saw numbers rise by an extra 16,000, and crime fell by a huge 43%! However, the situation now is very different.  By 2015 the government will have sacked at least 15,000 police officers, returning numbers almost to where they were when the Tories left office in 1997. There is already a proven correlation between and increase in police numbers and reduction in crime, we saw this under Labour, as police numbers rose, so crime fell. As the government have only just started reducing numbers of police officers it is way too soon to see the effect this will have on crime.The question is; how "tough and intelligent" is it to sack 15,000 police officers and expect crime not to rise? As it is according to experts the modest 6% reduction in crime is partly because the police no longer have the manpower to investigate it, so some crimes are not only going undetected, the justice system is letting down the victims of crime, who feel  they have nowhere to turn and no one to turn to!

Community Service Orders -  Cameron said: "Every community service sentence should have a punishment aspect attached to it". Er hasn't it already? It's a bit baffling, what does the PM actually mean  by this?

Wormwood Scrubs - Cameron said he visited the Scrubs prison to see how their "tough but intelligent" response to crime was working. He said "today he saw himself at Wormwood Scrubs" Oh the delicious irony of that, Wormwood Scrubs is where a lot of lying, conning cheating conniving con-men are, so he must have felt at home!


Cameron's new chairman Grant Shapps, or is that Michael Green or Sebastian Fox? Has recently accused Labour of "not learning" in some silly sixth form poster campaign, well, judging from what I have seen and heard lately it isn't Labour that isn't learning it is this 'omnishambles' of a government! They cannot get anything right, every single policy they announce ends in a u-turn, today it is not only "another day - another slogan", it's "another day - another u-turn", as they call off the badger cull after being repeatedly told by top scientists that they have got it completely wrong!

I have been told by a Tory MP that there is enormous and growing discontent between back-benchers as they are beginning to feel that Cameron is a loser. (I could have told them that when they first elected him as their leader). I have received some emails from people within the Tory party, that many are losing heart and faith with Cameron and they are asking what is the point of working for a government that seems to have totally lost its grip. This government are in a parlous state, Cameron latest reshuffle has just produced more confusion, none of them seem capable of being in high office.

However,  it is not what Cameron, Osborne and Clegg are doing to the Conservative party that is worrying and dangerous, it is what they are doing to this country and our people. They are destroying, education, welfare, the NHS and the railways. They have allowed utility bills to soar and people are now faced with a choice of eating or heating.

We have a car crash of a government and the people of this country are fast losing confidence in their ability to manage the country properly and the what are the Liberal Democrats doing? *NOTHING*, they are allowing it all to happen, bunch of spineless cowardly jerks. This is what happens when we have a government that is trying to govern by means of using right wing ideology, the mess and chaos and confusion they are causing will not be forgotten, this could spell the beginning of the end for the Tories, the Liberal Democrats however, are already dead in the water!

Cameron's failure to sack Andrew Mitchell will be his downfall, this issue has produce a genuine 'cut-through' with the public, who are now looking at his leadership and realising that we have a total fiasco, a farce for a government. It tells us a lot about Cameron's leadership and judgement, mainly that he hasn't got any.

It will take more than some hastily cobbled together speech on law and order to restore the Tories faith in him, however, I doubt the public will ever trust him again. Once the public see through someone like this, very seldom is the situation ever reversed, from here on in things will just continue to get worse for Cameron and the Tories. If they couldn't command a majority in 2010 when they had everything going for them, how are they going to do it in 2015?

As a criminal barrister - I've long been exasperated by successive government's desperate attempts to use the Criminal Justice System to cover up their failures in social and economic policy and their mindless search for headlines.
The reasons for crime are poverty, drugs, alcohol and the failure of society to create stable lives for many people - but politicians won't make this link. If they did - then that would be 'intelligent.'
I analyse Cameron's speech further in the following article: http://www.allthatsleft.co.uk/2012/10/cameron-misses-the-point-about-re-offending-and-crime/

When even Norman Tebbit weighs in and describes Cameron's reign as a 'dog of a government', even the most die-hard Tory must realise that Cameron is an abject loser.

Cameron looked pretty desperate whilst delivering his speech - he's lost the arrogant smarminess that used to be his default demeanour.

It is no coincidence that Cameron's government have increased child and pensioner poverty by around 500,000 in just 2½ years completely reversing the Labour government lifting 500,000 people out of poverty in 13 years!

@Nicky, I agree entirely, it'll take along time for Cameron to Recover fron the mauling Norman Tebbit gave him last weekend (If he ever does)