Tories Now Looking To Charge Us For Freedom of Information 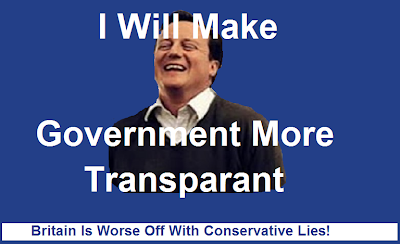 Does the Sun newspaper editor Dominic Mohan and journalists Trevor [bleeding heart] Kavanagh back these plans to charge for Freedom of Information? It will be interesting to see with right wing Tory supporting newspapers back this latest attack on our human rights and freedoms.

This coming from David Cameron who promised that his government would be more transparent than any other government - total shame and total and utter hypocrisy and once more we see the prime minister laid bare to his own lies, his own hypocrisy and his own duplicity and promise breaking.

I wonder if this has anything to do with the fact that the Department of Health has been bombarded with requests for copies of the 'Risk Register' containing details that the government have identified as serious risks to their own Health and Social Care Reforms Bill?

Andrew Lansley has been ordered to publish the full "Risk Register" by the Information Commissioner, up until now he has point blank ignored that order and refused to publish it - why?

Why is this Tory government trying to prevent people of this country from discovering the truth?

Look out for yet more sycophantic crawling from the Tory supporting right wing press as they either ignore this vitally important story or seek to find ways to justify Cameron's attempt to block us from discovering the truth about him and his hideous government.
Posted by Gracie Samuels at 1:09:00 PM