Dangerous Parallels of Thatcher, Cameron and Osborne and a Small Clegg 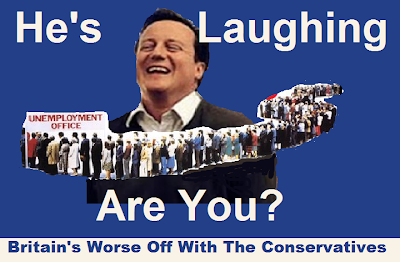 When in opposition, former Conservative Prime Minister, Margaret Thatcher and Sir Keith Joseph (remember him?) founded the Centre for Policy Studies, where they and other Tories made provisional plans for "free market solutions" to what they saw as economic problems. The object of this mission was to put their plans into practice as soon as they regained power. Here is where the marked parallels of the Thatcher regime start to compare heavily to the Cameron - Osborne regime.

Sir Keith Joseph was of the belief that "full employment" policies were to blame for high inflation. When Margaret Thatcher won the 1979 general election the pair wasted no time in giving absolute priority to conquering inflation at whatever costs to employment and living standards. Now all these years later David Cameron and George Osborne are adopting the same policies, but far from lowering inflation George Osborne has become the first chancellor to actually increase inflation and increase unemployment at the same time! In 21 months Cameron and Osborne have also drastically reduced living standards too.

The basic philosophies of Thatcher and Joseph then, and now, Cameron, Osborne and Clegg, are quite simple, they believe that government should intervene less, and by leaving companies and consumers to make their own decisions this will lead to an increase in efficiency and individual liberty. However, just as the policy failed dramatically in the Thatcher and then Major eras,  it is now failing catastrophically with Cameron and Osborne. The basic macroeconomic principles of both the Thatcher government and now the Cameron government are the same - 'cutting taxes and cutting government spending'. However, in their haste to cobble together what they hoped would appear as a sensible economic policy and changing its appearance in order to make it look like their own, Cameron and Osborne have ignored one vitally important thing - Thatcherite policies failed the country when she was prime minister, just as they failed again when John Major was Conservative  PM and are failing the country again now and another parallel; just as Thatcher and Joseph had no "Plan B" neither does David Cameron and George Osborne!

Unlike Gordon Brown former Labour PM, Thatcher did not have a global financial recession, the worse for over a 100 years and a banking collapse to contend with but still managed to produce a very deep recession with over 3 million unemployed, the damage her policies caused industry were extensive and long felt, especially by people in the north of England, Wales and Scotland. Today there are still whole communities  trying to recover from being attacked by successive Conservative governments.

Cameron and Osborne like to  portray themselves as "progressive" but they are responsible for introducing a 2.5% hike in the most regressive tax of all  -VAT. Raising it from 17.5% to 20%.  They appear to have failed to learn from their predecessors that raising VAT, cutting spending and constraining the growth of the money supply just does not work.  VAT is a regressive tax which not only taxes the poor disproportionately, it is hurting everyone (including government coffers) and is also causing conflict within his own policy! It is like some kind  of shifting of "economic tectonic plates" which when they crash into each other causes an immovable solid mass of unemployment and economic misery to millions. 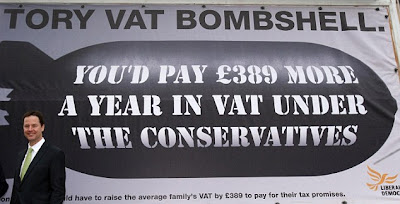 However, it is not a new problem, exactly the same problems were caused by Margaret Thatcher (and latterly former PM John Major) when despite her promising faithfully to the contrary (like Cameron and Osborne and Clegg), Margaret Thatcher also raised VAT which in turn led to mass unemployment. Even the hapless useful idiot Nick Clegg noted that a VAT hike was the "Tory Bombshell" in his election campaign, the fact that he soon forgot about it in order to snatch a few glory years in government as deputy PM is something which I guess will be settled between him and the electorate come the next general election!

We should not forget either that during the former Tory PM, John Major's years, inflation rose to 15.9% and stayed there for over a year, with hundreds of thousands small businesses going bankrupt, huge job loses, redundancies, bankruptcies and home repossessions. Just like we are seeing again now, our high streets then resembled ghost towns, even charity shops are feeling the pinch this time!

Osborne has allowed utilities to soar and gas has risen by at least 19% and electricity around 14%, now we learn that our water bills are to rise by around 6% too! Rail fairs have risen by 6% and the overall cost of living has risen by approximately 6.9% since Osborne became chancellor in May 2010.

The governor of the Bank of England, Mervyn King has predicted that inflation will fall and there has been a very small reduction, however, at what cost to the nation? Is soaring unemployment, wage freezes, unemployment, fear of unemployment and falling living standards, bankruptcies, redundancies, repossessions really an "acceptable price to pay for lower inflation?" In any case because Osborne increased VAT by a massive 2.5%, he actually was the direct cause of inflation rising, so people not only had unemployment, fear of unemployment, wage freezes and the rise in the cost of living to contend with, they also had to fork out for the chancellors regressive Value Added Tax rise.

The present government are once again trying to force through the failed monetary policies of  Thatcher, they have moved from Keynesian demand policies, forcing almost one million public sector workers out of a job, totally relying on the private sector to create more jobs to accommodate the job losses in the public sector. To undertake such a high risk gamble at the best of times could have destabilised the economy, but to take these risks at such a time when the recovery was fragile *as well as* taking away the private sector spending power seems not just foolhardy but basket case mad insane!

Cameron, Osborne and Clegg have created a perfect storm. When they first came to power Osborne immediately took £6.9 billion out of a fragile recovery economy, he then introduced the increase in VAT and made hundreds of thousands public sector workers redundant, which combined had the immediate effect of stalling growth in the economy, people stopped spending, because they had either already lost their jobs or they were in fear of losing their jobs, because people stopped spending, demand in the economy faltered and growth suffered and despite project Merlin, the banks still refused to cooperate, which means hardly anyone can get a mortgage and now unemployment is soaring way out of control and many analysts expect the UK to go into a double dip recession. Still the private sector are not picking up the slack and the government's £80 billion austerity package meant to clear the deficit over the next four years has now started to kick in, there seems little hope that things will pick up any time soon. Despite all the pain, the government is way off target and will fail to clear the deficit by 2015, so all of this pain has been and will be for absolutely nothing! They could have just carried on with the way Labour were intending to clear the deficit, which would have meant cuts of £40 billion over four years. When the Tories inherited this economy far from being dire as they like to say, actually the economy was in 1.1% growth and unemployment was falling and consumer confidence good!

Thatcher decided to attack the unions as her "party piece", while Cameron and Osborne have decided to attack welfare, and the NHS, privatising the NHS is something they seem adamant in doing. Thatcher struck out at the unions for political reasons and Osborne, Cameron and Clegg are trying to get rid of the NHS for political reasons too. If they can foist it off onto the private sector this should give them money to give to people in forms of tax cutting bribes in order to get themselves re-elected. Just as Thatcher wrongly believed that the unions were responsible for all the country's woes, Cameron, Osborne and Clegg believe that the NHS is responsible for all this country's woes and want to get rid of it.
Like the government's predecessors in Thatcher and Major they even tried to gain its own windfall from selling off what was left of public owned institutions like our NHS and our forests etc.

The fact is solely because of previous Tory governments selling off the country's assets, we are now being forced to pay exorbitant costs for our gas, electricity and water which the Tories sold off to foreign countries, the result being that now France has much cheaper electricity and water because we are being forced to subsidise them through our high utility charges!

Rail fares through the Tory privatised rail industry are now so expensive they are well beyond the reach of ordinary people and the railways have been broken up, fragmented and now no one knows who is responsible for what and when. (Just like the NHS will become)

Cameron, Osborne and Clegg are even picking their own fight with the unions over public sector job losses and pensions, they  are taking away workers rights in the work place weakening their hand to fight bad decisions and strengthening the hand of bosses in the private sector giving the private enterprises the chance to shed excess workers without having to pay them proper redundancy pay. The jobs that are being created in the private sector are mainly low paid and unskilled where the private sector has suddenly realised that they can hire two employees virtually for the price of one, with the government paying partly to subsidise these companies by forcing the taxpayer to pay top up credits to people earning low wages. This is the kind of readjustment the Tories want at the expense of the poor, unemployed, disabled, vulnerable and sick. it is as if they are trying to take this country and the majority of people back to the days when people knew their place and tugged their forelocks as the landed gentry rode by!

There is nothing new about the Conservatives it has been one huge con right from the beginning and a cursory look at recent history will confirm this.

David Cameron has schemed, deceived, deliberately mislead and lied his way into Downing Street and against just as his Conservative predecessors, Thatcher and Major, he and Osborne are now totally ruining the British economy, things were never this bad under Labour, not even when we had just gone through the worse global financial recession for over a 100 years, Labour still managed to hand the economy over in growth with falling unemployment and they left this country infrastructure in a much improved state than they inherited in 1997.

It was not Labour's spending on vital public services like schools, hospitals, nurses, midwives, doctors, teachers and police etc that caused the global financial recession, it was Tory doning bankers who were responsible for irresponsible lending and because they gambled our money and lost in casino style banking and who was responsible for deregulating the City and destroying British manufacturing in the form of closing down the coal mines, British steel and British ship making and the British car industry? 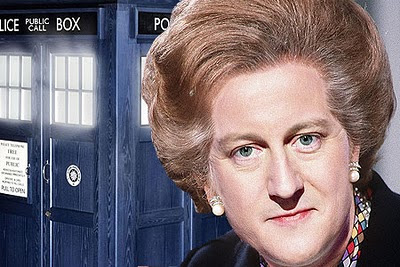