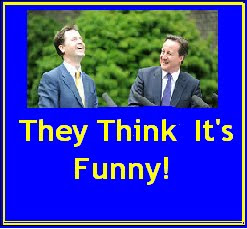 Poor People Are Just A Joke To These Pathetic Creeps

Chancellor George Osborne a multi millionaire at just 39, who comes from a privileged background and was born into money, insists that his budget with its £40 billion of cuts and tax rises, is progressive and fair. However, the Institute of Fiscal Studies (IFS) have insisted that the measures in the emergency June budget are "regressive".

The IFS analysis suggests that low income families with children are set to lose the most - about 5% of net income - due to benefit cuts announced in the Budget.

Virtually every single economist in the world have told Cameron, Osborne and Clogg that they are cutting to fast and too deep and that they risk seriously harming the UK economy, but they refuse to listen. They have also been told by many leading economists that their austerity measures are regressive and will hit the poorest people and families the hardest, now they are being told by the IFS and yet again, the "breathtaking" arrogance as Cameron, Osborne and Clogg point blank absolutely refuse to listen and the Treasury said that it did not accept the "selective" findings of the IFS.
Cuts to areas such as housing benefit and disability allowance will hit the poorest to the tune of £422 between the Budget and April 2014.

Other income groups are forecast to lose larger amounts in cash terms, but as a percentage of take-home pay, the poorest 10% will be hardest hit, the report says.

The Treasury said the IFS's analysis ignored the pro-growth and employment effects of Budget measures, such as helping households move from benefits into work, and reductions in corporation tax. 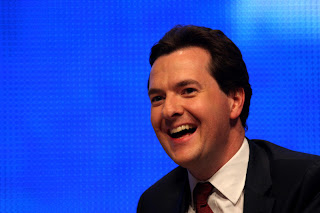 George Osborne Thinks It's Funny Too!

Poor People Must Be A Truly Hilarious Joke To The Multi-Millionaire Ex-Public Schoolboy.

Osborne has totally ignored that the growth he talks about came from when we had a labour government and that labour had the country on the road to recovery and that the previous chancellor Alistair Darling and previous prime minister Gordon Brown have repeatedly warned against cutting too fast and too deep and making 1.3 million people unemployed, would seriously jeopardise the fragile recovery and the growth reported that Osborne points to was stronger than expected, only because of the measures put in place by the labour government, measures that George Osborne have removed.
Osborne is also relying on the private sector to make 2 million jobs, something which the private sector repudiates it will be able to do.

In June, Nick Clegg reassured his Lib Dem colleagues that fairness was "hard-wired" into the Budget.
The Liberal Democrats are supposed to be in the coalition to keep the Tories at bay, however, they have agreed with every single policy and proposed cut, how can Liberal Democrats back a budget that a respected think tank like the IFS has condemned? They need to ask themselves if they would be backing this budget if they were still sitting on the opposition benches? There are 23 Lib Dem MPs with government positions and they are taking everything that their Tory masters are ordering without so much as a whimper, but what about the other Liberal Democrat MPs? What are they doing and what are they saying? Do they agree with this? Are they comfortable with supporting a right wing government who are attacking the poor the hardest and making them pay for what greedy banks did to this country? What about Charles Kennedy, who last weekend denied reports that he was to join the labour party? Is he going to continue being a member of a party that is viciously attacking the poor and vulnerable? Is this what he became a Liberal Democrat for, to back the Tories and prop them up in government so they can launch vicious cruel attacks on the poor?
Are the Liberal Democrats going to keep blind following their leader who seems hell bent on leading them into political oblivion as their poll ratings plummet and get worse week upon week? Clegg who used to be a member of the Conservative party when he was at University, it is safe to say is more right wing than many on the right of the Tory party, are Lib Dem MPs happy about this and are their grass roots supporters and voters? Isn't it time that the Lib Dems grew a pair and kicked Clegg out before he totally ruins the Liberal Democratic party? How long can they go on like this? They are currently begging Clegg not to front the referendum on AV voting reform because they fear that he will damage their chances of a yes vote.
This report from the IFS casts doubt on his claim and has already been seized on by Labour, who accuse the Lib Dems of providing cover for an old-fashioned Tory Budget.


Budget Soft On The Banks and Hard On The Poor

This a serious charge for the Tories and the Lib Dems to answer, but Nick Clegg, says no, it is not the budget, it is the IFS at fault! Cameron, Osborne, Clogg and Danny Alexander are behaving like stupid naive children, pretendy politicians running the country, millionaires all of them who have not got a clue what it is like to live on such a low income. What is it going to take for these fools to understand what they are doing to this country?
The fact is that on Budget day George Osborne and then David Cameron said; "this was a progressive Budget, there would not be a single child put into poverty as a result,".

George Osborne said that with his budget what you see is what you get, obviously he was being economical with the truth as well as our money because, what is now being discovered, when the detailed analysis has been done, is that the Treasury excluded certain things from that analysis. They excluded the impact of cuts in tax credits, in disability living allowance.

On a closer look at the facts, the fact is that a family with children on the lowest incomes gets hit the hardest by this Budget.

The BBC's chief economics correspondent Hugh Pym says:
"The disagreement between the Treasury and the IFS over their forecasts was about timescales.
When George Osborne said in the Budget the measures were progressive he was referring to changes taking effect by 2012. The IFS argues that we should look at a longer period, up to 2014, taking in a fuller range of measures including cuts to housing benefit.
On that basis the IFS stands by its analysis that the full package of measures, taking in Alistair Darling's last Budget and Mr Osborne's changes, is regressive, our correspondent says.
The report said that more than three-quarters of benefit claimants were affected by increases in housing costs, which are included in the RPI.
The report said: "Low-income households of working age lose the most as a proportion of income from the tax and benefit reforms announced in the emergency Budget.
"Those who lose the least are households of working age without children in the upper half of the income distribution.
"They do not lose out from cuts in welfare spending, and they are the biggest beneficiaries from the increase in the income tax personal allowance."
In George Osborne's June Budget, the chancellor increased VAT from 17.5% to 20% and cut welfare spending.
Child benefit and public sector pay were frozen and 25% cut from public service spending.
Posted by Gracie Samuels at 8:00:00 PM