Conservatives Profit From Recession ~ So Much For New Politics! 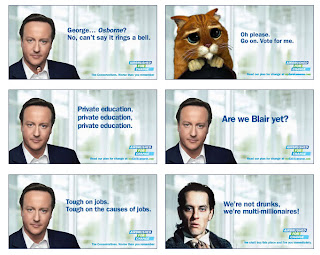 David Scameron
The face of "New" Politics Who Likes To "Hedge" His Bets!
***
Britain's Conservatives profit from recession David Cameron, leader of the British Conservative Party, has taken millions of pounds in donations from hedge-fund managers whose firms made fortunes taking bets that the share price in British banks would fall. Donors are entitled to attend intimate suppers with Cameron.

Previously these were held at his House of Commons offices but after being criticised by the standards watchdog they now take place outside parliament.

Hedge fund managers whose donations entitle them to membership of the group include Michael Hintze of CQS, who has given £662,500 and whose organisation shorted shares in Bradford and Bingley. Two other men who qualify as members of the group are Paul Ruddock, who has given almost £210,000, and David Craigen, who has donated £50,000. The pair's investment firm, Lansdowne, short sold shares in HBOS. The Conservative Party insist that all donations are legal and comply with Electoral Commission rules. David Cameron stated in March 2006 that he intended to 'expunge the impression, now deep in the public mind, that influence, access and honours can be bought by wealthy institutions... and individuals'.The Conservatives continue to receive money from Lord Laidlaw, a Monaco-based tax exile who has given the party more than £3m. One donation came after the fact that he had taken part in orgies with prostitutes was exposed in the tabloids. (Observer, 28/9/08)
Posted by Gracie Samuels at 10:49:00 PM