A Tale of Two Britains 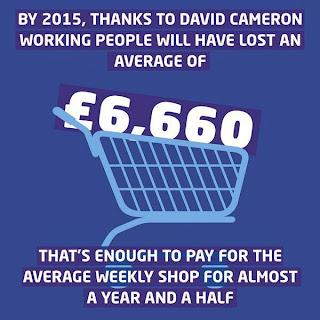 Yesterday there was a report in Sunday's Independent that reported figures released that show how austerity is impacting on Britain's poorest and most vulnerable people and showing that the numbers being treated for malnutrition at hospital has nearly doubled.

Primary and secondary diagnoses of malnutrition - caused by lack of food or very poor diet - rose from 3,161 in 2008/09 to 5,499 last year according to the government's own figures released by health minister Norman Lamb. This coincides with the escalation in the numbers flooding to foodbanks because they can no longer adequately feed their families and the soaring cost of living - the country's poor and vulnerable are in crisis.  In another indication of how badly the government's policies are impacting on the poor and weak, figures from the Health and Social Care Information Centre show that diagnoses of rickets have also risen significantly, from 561 in 2008/09 to 702 in the past year. Norman Lamb was forced to reveal the figures after Labour MP Jim Cunningham acquired the figures in a written answer to a parliamentary question last week.

The number of food banks has risen to around half a million a year, according to Oxfam. The largest food bank operator. Oxfam are also now engaged in making emergency aid parcels up as poverty and malnutrition problem continues to increase in the UK. The use of food banks has not been collaborated exactly because as well as the big charities that offer nationwide distribution of food supplies, there are hundreds of small food banks cropping up all over the country as need soars. 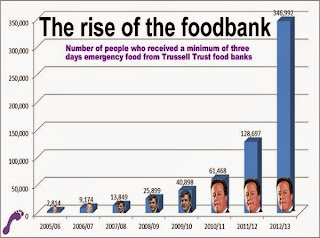 People on low pay and who subsist on benefits and those who live in rural areas are among the worst hit. The situation can only get worse as government benefit cuts, bedroom tax, council tax cuts, rising food bills, rising childcare costs and rising cost of energy take their toll on already weak and vulnerable incomes and people. The new charges for gas and electric come into force today which will place further strain on household incomes, in many cases people are just going to be completely unable to absorb the new energy hikes and for those on prepayment meteres covered in depth HERE, the costs will be even greater, as these consumers are already charged more for their gas and electricity by the energy companies. It's a typical case of the poor being hit with a double whammy simply because they are poor. 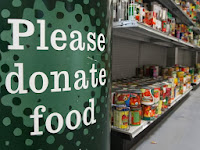 What next from the Tories and Liberal Democrats? Will they be saying the 'undeserving poor' do not need to eat? Iain Duncan Smith the work and pensions secretary at the DWP says that; "the benefits systems leaves no one struggling for their basic needs" yes that's true if you do not have to eat, or pay to light and heat your home and according to Tobias Ellwood Tory MP for Bournemouth East when he spoke in Labour's debate on the bedroom tax last week, poor people are not allowed homes anyway as he said; people living in council houses have no right to call their house their home and must be prepared to move as and when required. So that's food, heat, lighting and residence taken care of by the Tories and they've already started dismantling work on our state education system and NHS, so pretty soon all poor people will be homeless, malnourished, dying of poverty related illnesses and be unable to be educated about them, or treated for them in an NHS  hospital and they will all be in the Tory and Lib Dem Coalition process of being expunged from society and hopefully from the face of the earth where they cannot bother Tory and Lib dem types ever again!

So no more need for the country's Chief Medical Officer, Dame Sally Davies to worry further about all children being given vitamins to halt the process of diseases like rickets as the country slips back to the Victorian era and abject poverty and malnutrition, and she can forget all about the fact that "child mortality rates in some of the poorest parts of England are three times higher than in rich regions. Soon we will have socially cleansed the lot and eradicated those "damned spots" on the landscapes for good. 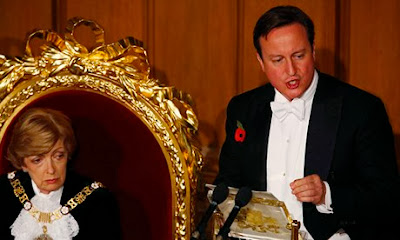 David Cameron at the Lord Mayor's banquet last week, speaking from behind a gold lectern stood next to the Lord Mayoress bedecked in her gold chains of office and sunk into the plush red velvet upholstery of her ornate golden throne telling a room full of over fed, over privileged bankers, hedge funders, corporate businessmen and private health companies etc that 'austerity is permanent', after dining on a lavish dinner of fillet of beef and a celebration of British mushrooms washed down by fine wines and champagnes - Dave doesn't do paradox - obviously. 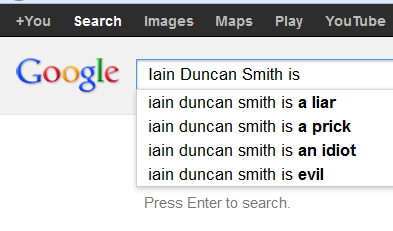