Time For Liberal Democrats To Admit Who They Are! 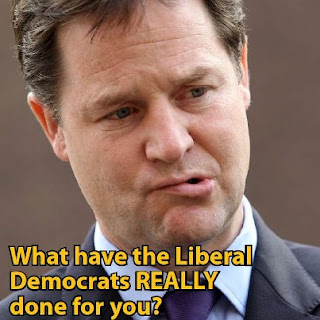 Nick Clegg has signalled that he intends to stay with the most right wing government this country has ever known and has indicated that if people do not like it then they should "bail out".
If Clegg really does believe this and also believes that his and the Liberal Democrat party's future lies with the Tory party, then it is he that should do the decent thing and cross the floor of the House and join the Conservative party taking with him every Liberal Democrat MP who feels the same. Then when the final number of MPs wishing to join the Tories is known, there should either be by-elections held, or the Tories should do the decent thing and call a general election on the basis that the coalition agreement had been broken because there is no coalition. How can there be a coalition government when there is no opposition from the coalition partners?

There is something profoundly flawed in a person who believes it is OK to change the entire ethos of  a political party, in order to gain power without even consulting the voters who put them them in that position. What Nick Clegg has done is not only wrong, it is inherently deceitful and immoral. He knew before the 2010 general election that he was going to renege on the Liberal Democrat tuition fees pledge, yet he still chose to dupe people into voting for them and that is defrauding people out of their votes. Why is there absolutely nothing being done about this?  Clegg has actually stolen peoples votes, surely this must be in breach of parliamentary standards? In his conference speech (and not for the first time) Clegg has told voters if they do not like what he is doing then they should vote for someone else. Last time he said that he more or less told all former Labour voters who had voted for the Lib Dems as a protest, or for tactical reasons that the party was not some vessel for dissatisfied Labour voters. If Clegg really does believe this then he should give voters their votes back and the  chance to do just that!

I fervently hope that when it comes to election time people remember what he has said and vote accordingly! I for one will be remind them and I will urge every other Labour campaigner to do likewise.

Clegg is insisting on giving the Liberal Democrats blessing and backing to inflict yet more austerity measures on those least able to sustain their effect. The working masses, the most vulnerable, the elderly, the young, the sick, the disabled are all being forced to pay for the greed of the Tory supporting, Tory funding City bankers and Clegg thinks this is the right thing to do.

Osborne's plans are not working, that much is obvious, but I no longer think that this matters to this government. it is not getting the country out of debt that drives them, what is driving the Tories is their ideology to change everything. To make the state smaller, to take away workers rights, to take away human rights. To take away welfare. To take away the NHS. To drive down wages and living standards of the masses in this country, while allowing those at the top to become richer and richer at out expense.

This is what Clegg is giving his consent and backing to and this is what every single Liberal Democrat MP will be consenting to if they continue to go along with Clegg and continue what they have done since 2010 and give their votes to help get the Tories legislation through parliament. From cutting welfare to privatising the NHS.

Never has a political party so sickened me as the sight and sound of the Liberal Democrats all scratching around for ways not to condemn Andrew Mitchel the Tory Chief Whip when he called serving police officers "fucking plebs" and told them: "They should know their fucking place". Their halfhearted attempts to condemn Mitchell while at the same time keeping his and David Cameron's "favour" were nauseating. If a Labour MP had done this would they have been so easy going? No of course they wouldn't, which makes it even more hypocritical and sickening. When Mitchell called police officers "fucking plebs" he also inferred that we are all "fucking plebs" who should know our places!

How can anyone who once called themselves Liberal Democrats even think of voting for this opportunistic, sniveling lying shower?

It is time the Liberal Democrats stopped this pretence and actually admitted that they are now true die in woad Tories and allowed their supporters to make up their minds if they still want to support them.
Posted by Gracie Samuels at 6:43:00 PM