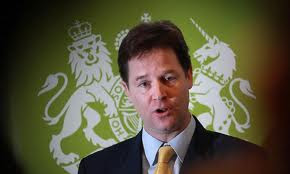 So lets get this straight, Nick Clegg and his Liberal Democrat MPs have had the chance to vote against (among other things) :

Yet they didn't, they voted with the government they are a part of and helped pass laws that will have a serious detrimental effect on people and their quality of life and their children's lives, and the lives of so many just starting out. None of this appeared to matter very much to Clegg and his MPs, oh as usual they stomped about a bit issued a few threats for journalists and TV  cameras, said they would not vote them through about half hour before actually voting them through with the Toy government.

Yet when it comes to Lords reform, you can't move for Nick Clegg appearing on his white charger (his high horse) to tell us all how this is so important and that, this was in all three parties manifestos so it must be decided.

It doesn't seem to resonate with Clegg that the destruction, fragmentation and privatisation of the NHS was NOT in the manifestos of either the Tory party or his party, but this is exactly what is happening (thanks to him). Also I seem to remember that it was in the Lib Dem manifesto to abolish tuition fees, but that didn't seem to bother him because he voted with the government to treble them anyway. So why the hell should we worry about what was in the Liberal Democrat manifesto now just because it suits him [Clegg]?

He is part of a party that awards a £1 million bonus to the fatcat boss of Atos for drawing up plans to attack disabled people and remove as many of them as possible from the benefit (never mind if they are genuine or not) and that apparently doesn't bother him one iota, but for goodness sake don't tell Clegg he can't have his Lords reform because that will make him really kick off BIG TIME!

Never let it be said that the Liberal Democrat leader and Deputy PM and general dogs body to the Tory party doesn't have his priorities right!
Posted by Gracie Samuels at 3:54:00 PM